A device used for steering and manoeuvring a vessel. Rudders are hydrofoils which are pivoting on a vertical axis. They are located normally at the stern behind propeller(s) to produce a transverse force and steering moment about the ship centre of gravity by deflecting the water flow to the direction of the foil plane.

Rudder effectiveness can be improved by:

- rudder arrangement in the propeller stream,

- steering gear which allows larger rudder angles than the customary 35°,

Rudders are one of the areas where extra investment spent on getting the right equipment can bay back the shipowner many times. One of the basic problems is deciding whether to optimise the rudder for the service speed or for low-speed manoeuvring. Many rudder configurations can meet guidelines for turning circles and zig zag, but still not be optimum for the ship service profile. For ships like VLCCs and container vessels, the majority of service is course keeping. Consequently, rudder angles during normal course keeping and manoeuvring operation are limited to 35deg. For some service profiles good slow speed performance is very important and high rudder operating angles will give greater benefit.

- Balanced rudder – A rudder with a part of the blade surface put forward of the axis so the water pressure on this portion counterbalances that on the after part.

- Becker rudder – A spade-type rudder with flap. The Becker-type rudder has a moving flap on the trailing edge. When the rudder moves, a mechanical linkage diverts the flap to a higher angle to maximise the sideways thrust. Either 45 deg or 65 deg maximum rudder angles can be specified for bigger and faster rudders.

- Flap rudder – A high-lift rudder developed by German flap rudder specialist Willi Becker. It consists of a blade with a trailing edge flap activated by a mechanical or hydraulical system, thus producing a variable flap angle as a function of the rudder angle. Flap rudders give a much higher lift per rudder angle and a 60% to 70% higher maximum lift compared to the conventional rudder of same shape, size and area. In addition, the high balanced area improves manoeuvring characteristic at the low speeds by blocking the forward thrust of the propeller. High-lift flap rudders are specified for vessels which require better manoeuvrability than a conventional rudder, can provide.

- Flettner rudder – A special design of flap rudder which uses two narrow flaps at the trailing edge, one above the other.

- Schilling rudder, also fishtail rudder – In the Schilling-type there is no flap, but the trailing edge is formed in a fishtail shape that accelerates the flow and recovers the lift over the aft section of the rudder. With operating angles up to 70 deg, the Shilling rudder dramatically improves both the course keeping and the vessel control characteristics.

- Semi-spade rudder with simple pintle – The semi-spade rudder is supported by a horn. It consists of a rudder blade with a pintle and the vertical shaft (the rudder stock) which connects blade with the steering gear. The rudderstock is made of forged steel. A key is fitted on in way of tiller. Stainless steel sleeves are used in way of bearings. The cone coupling is used to fasten the rudder blade to the rudderstock. The lower part of the rudderstock is inserted into a solid part belonging to the blade and locked by a nut and key. A keyless rudder stock – blade coupling may be accepted by a classification society. The contact area of conical connection between the blade and the rudderstock is to be verified by means of paint test (minimum 70%).

To the large extent the thickness of a rudder blade is dictated by the rudder stock diameter which in turn, is a function of the torque required and the bending moment. A streamlined rudder blade consists of side plates stiffened by internal vertical and horizontal web plates and solid parts in cast steel which ensure the housing of the rudderstock and the pintle. Means for draining the rudder blade after pressure testing or possible leakages is to be provided.

The pintle is fastened to the rudder blade by a conical coupling secured by a nut. Before the final mounting of rudder pintle, the contact between the conical surface of the pintle and its housing is to be checked by marking with Prussian blue or a similar method. The pintle and the nut are to be efficiently locked against rotation.

The semi-spade rudder has smaller movable area than the comparable spade rudder resulting in lower maximum lift generated at high steering angles. In normal operation, the propulsion power loss due to a rudder is lower than with a spade rudder because of the thinner profile. Use of thinner profile is possible because of rudder horn carrying the rudder forces instead of rudderstock. When selecting profile a good alternative is NACA 63-021 and thinner profiles. These profiles allow quite the high varation (3-5°) in angle of attack with no change in drag coefficient.

- Semi-balanced rudder – A rudder with part of the blade positioned forward off the turning axis.

- Spade rudder – To maximise the rudder force at high rudder angles a spade-type rudder is usually selected. This kind of a rudder can act as a “reaction blade” by deflecting propeller outflow using its total movable area. Especially if equipped with a flap, this type of a rudder offers the best crabbing performance. Disadvantage of the spade type rudder is thick profile and often unfavourable profile shape from resistance and propulsion point of view. A thick profile results from a rudderstock that has to have large diameter in order to carry the rudder forces. Becker Marine Systems uses KSR technology for bigger and faster ships for flap rudders and full spade rudders, achieving rudder thickness even lower than in case of semi-spade rudders.

- Twisted leading edge rudder – In contrast to conventional symmetrical rudders, the twisted rudder comprises a special asymmetrical section offset to port and starboard at the leading edge along the rudder span. This feature results in improved pressure distribution on the rudder surface from the rotational propeller flow, thereby improving resistance, manoeuvrability and cavitation qualities. 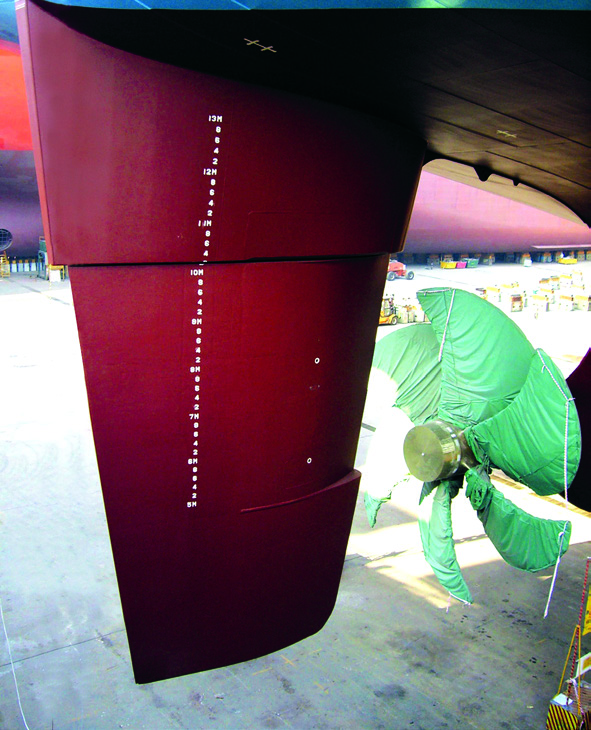