A revolving screw-like device that drives the ship. The screwtype propeller consists of a hub and blades, all spaced at equal angles about the axis. When the blades are integral with the hub, the propeller is known as a solid propeller. When the blades are separately cast and secured to the hub by studs, the propeller is known as a built-up propeller. The face (or pressure face) is the afterside of the blade when the ship is moving ahead. The back (or suction back) is the surface opposite the face. As the propeller rotates, the face of the blade increases pressure on the water to move it in a positive astern movement. The tip of the blade is the most distant from the hub. The root of the blade is the area where the blade joins the hub. The leading edge is the edge that cuts water first when the ship is going ahead. The trailing edge (also called the following edge) is opposite the leading edge. A rake angle exists when the tip of the propeller blade is not precisely perpendicular to the axis (hub). The angle is formed by the distance between where the tip really is (forward or aft) and where the tip would be if it were in a perpendicular position.

The thrust and torque of a propeller are created by the pressure differences on either side of the blades, which is related to relative velocity and blade geometry. The relative velocity is a function of the rotational speed (and radius) and the speed of water in the ship, s wake. Reducing the propeller speed and increasing its diameter also increases the efficiency.

In 1997, the heaviest propeller ever manufactured as single castings was supplied by Stone Manganese Marine. The six-bladed fixed pitch propeller was designed to absorb 65.9 MW, it has a diameter of 8950 mm and weighs 93.5 tonnes.

- Adjustable bolted propeller (ABP) – Similar in concept to a standard controllable pitch propeller, the ABP is based on a hollow hub with blades bolted to it from the inside. In service, the slotted holes on the hub allow the blade pitch angle to be adjusted to compensate for long-term variations in hull resistance. If the propeller is damaged, individual blades can be replaced without drydocking, and only spare blades have to be stocked rather than a bulky monobloc propeller.

- CLT propeller – The contracted and loaded tip propellers, developed by Spanish company Sistemar in the late 1980s: screw propellers with important load at the blade tips due to the fitting of end plates at the blade tips. As well as a higher efficiency, CLT propeller also offers lower noise and vibration, lower fuel consumption and better manoeuvrability.

CP propellers are almost standard requirements on ferries and cruise liners where their handiness in manoeuvring and compatibility with highly-skewed blades for noise and vibration reduction is important. Applying full astern power on a highly-skewed FP screw can lead to stress problems, whereas the CP type, turning always in the same way and achieving astern thrust by pitch reversal, avoids problems.

- Ducted propeller, shrouded propeller – The propeller placed in a duct, i.e. a ring with a cross section that has a wing-like profile. The duct offers protection to the propeller blades and contributes to the thrust generated by the propeller. The same amount of thrust can be generated from a propeller of smaller diameter, making it a suitable solution for small-draught vessels. See also Propeller nozzle.

- High skew propeller – A propeller of skew angle more than 25°C. A high skew blades are applied to suppress cavitation-induced pressure impulses. By skewing the blade, it is possible to reduce the vibration level to less than 30% of an unskewed design. The skew distribution is of the “balanced” type, which means that the blade chords at the inner radii are moved forward, while at the outer radii the cords are skewed aft. As the skew does not affect the propeller efficiency, it is a standard design on vessels where low vibration levels are required.

- Solid propeller – A propeller (including hub and blades) cast in one piece. 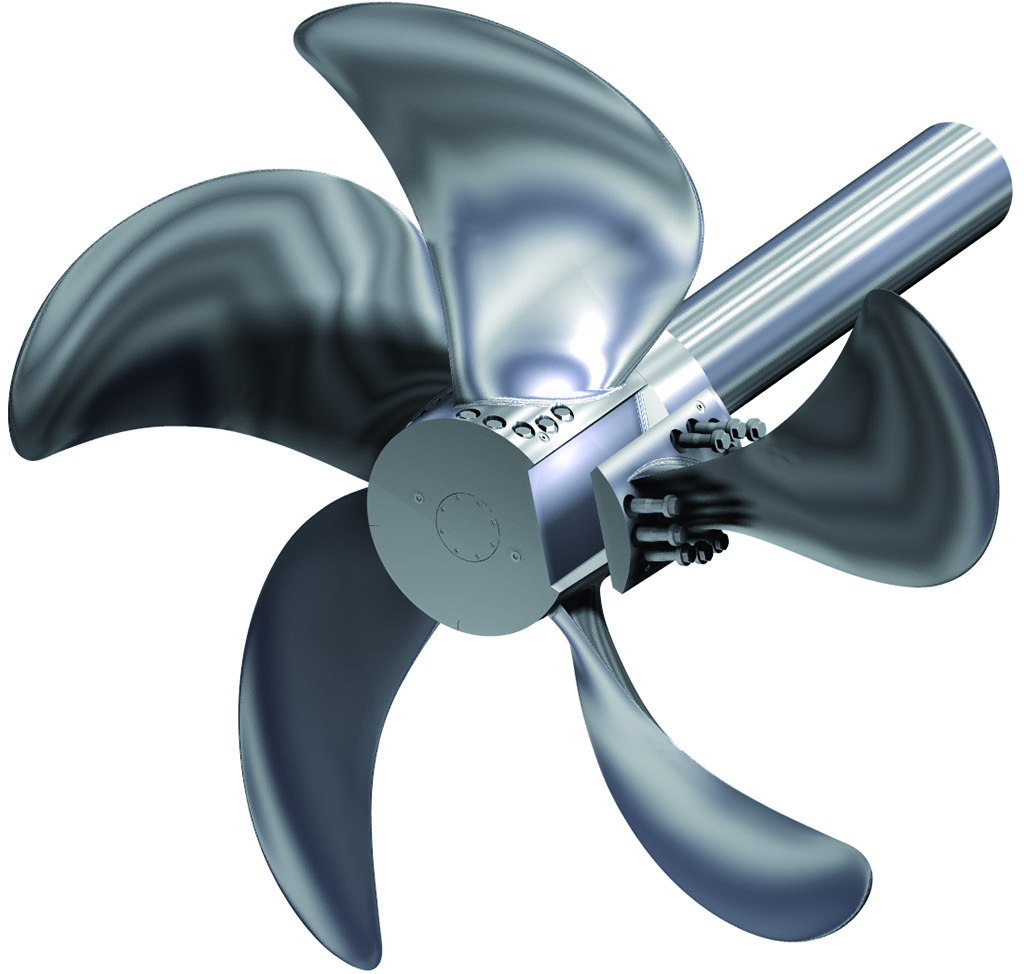