The VIKING ENERGY is the world first LNG-fuelled PSV. The construction of the hull and superstructure was subcontracted to the Polish shipyard Maritim in Gdańsk from where it was towed to Kleven Verft in Ulsteinvik, Norway, for outfitting. The vessel was designed by Vik-Sandvik to meet industry demands for minimising greenhouse gas emissions. The VIKING ENERGY has an overall length of 94.9m and a length between perpendiculars of 81.6m. It has a moulded breadth of 20.4m. The depth to the second deck is 6.6m and the depth to the first deck is 9.6m. The ship has a maximum draft of 7.9m and cargo deck area of 1030m2. It has complement of 24 crew, accommodated in 12 single berths and six double cabins.

The VIKING ENERGY features dual fuel engines, so is able to run on both LNG and marine diesel oil in any proportion. Using LNG results in a 90% reduction of the outlet of NOx (approx. 200t a year) as well as a 30% reduction in CO2 . This is important in Norway which has undertaken to reduce, by 2010, national NOx emissions by about a third from the 1999 level. Tests have shown that the vessel has a fuel economy rate of 30% better than that of diesel.

LNG is stored in a giant “thermos flask” in the middle of the vessel and is well protected. The tank is a horizontal cylinder with domed ends, fabricated from 304 grade stainless steel. It comprises an inner and an outer chamber, with a gap of 300mm between the two maintained under a high vacuum to insulate the LNG at –162°C from the surroundings. The volume is 234m3 , giving an effective fuel capacity of 220m3 when filled to the allowable limit. The tank in turn is fitted in a compartment with A60 fire insulation. All gas lines and valves are enclosed in ventilated sheaths, with alarm leakage sensors.

Before it is used, the liquid gas has to be vaporized and supplied to the engines at about 20°C and 5 bar pressure. This is carried out by means of a hot water vaporizer unit. Two coils are fed with hot water from the ship system; one rated at 390kW vaporizes the fuel gas to supply up to 600m3/h of free gas, the other smaller unit boils enough LNG to maintain pressure in the tank.

The electric power for propulsion and other services is derived from four main gensets. The main engines are Wärtsilä 6L32 DF 2,010kW engines units, although there is also a Caterpillar 3304T 116kW emergency genset.

These gensets are linked to a pair of contra-rotating 3000kW stern thrusters and two 1000kW tunnel thrusters in the bow. The vessel also has 880kW azimuthing retractable thruster for manoeuvring. This arrangement gives the VIKING ENERGY a top speed of 16 knots when fully loaded.

The electric propulsion systems were supplied by ABB in a workscope including a complete package of variable speed drives and power distribution as well as the electric propulsion and the thrusters. The vessel uses Direct Torque Controlled (DTC) frequency converters that afford accurate control of thruster magnitude and azimuth, leading to better manoeuvrability of the vessel. This type of motor drive directly reduces vibration and noise, benefiting comfort and the working environment. 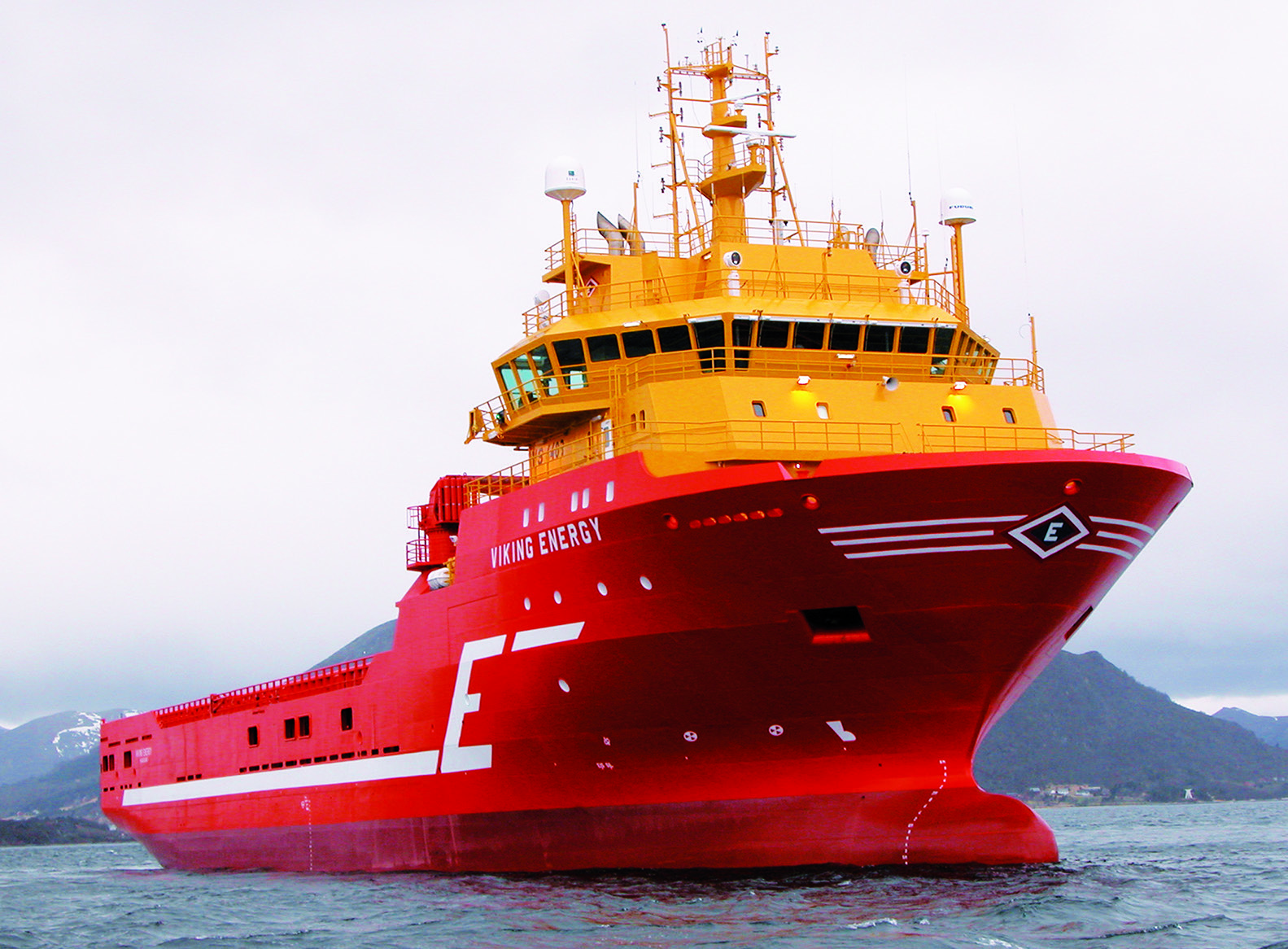