SEVEN BOREALIS is 182.2m long, with a breadth of 46.2m, and an operating draft of 8.5-11.35m. The vessel’s CLEAN-DESIGN notation, conferred by DNV, covers requirements including ballast water and fuel oil handling as well as low NOx and SOx exhaust emissions. The classification also recognizes environmental measures in place such as double-hull protection for the fuel oil tanks, bilge, and ballast water management.

The 5000t Offshore Mast Crane, said to be the world’s largest, was manufactured at Huisman’s Zhangzhou facility in China, and installed on the vessel during a four-day operation in March 2011. The mast is just over 85m above the main deck, and with the 120m boom extended to its highest elevation, the boom tip will be more than 151m above main deck. The crane has two main blocks of 2500t and can lift 5000t at 34m radius. With a footprint of only 16.8Å~16.8m and total weight of 4100t, it offers a very effective net outreach. In addition there is a heave compensated hookblock, which depending on its reeving offers lifting capacities of 1200t (4 falls: 1500m waterdepth), 600t (2 falls: 3000m waterdepth) and in single fall mode 300t that can go down to 6000m!! There is also a 110t whiphoist. Additionally, there are four load tuggers and five block tugger winches.

Huisman’s crane is designed for a variety of lifting tasks. Both main blocks allow for a 40° side lead with a combined spread angle of 80°, rendering unnecessary the slings and spreader beams normally needed for dual lifts. An auxiliary hoist, combined with the dual-lift functional, allows for three-point lifts and upending operations without concerns over the position of the load’s center of gravity, as this can be controlled by adjusting the tackle length.

The auxiliary hoist also serves as the vessel’s heave-compensated deepwater lifting mechanism, with the heave compensator positioned below main deck. This cancels the effect of wave-induced roll motion and heave on the ship that could generate vertical motions of the crane’s load.

Stability during installation operations is another feature. To compensate for heeling motions caused by offset crane loads, five pairs of ballast seawater tanks and 15 pumps are available, each capable of transferring water at up to 1300 m3/h. Total ballast water capacity is 41,021 m3. Filling and emptying of the tanks is controlled by a Kongsberg vessel management system. Four flume tanks generate additional roll damping to lessen roll motion induced by heavy sea states by around 40%.

The vessel is equipped with an S-lay system to lay pipe from 4.5’’ to 46’’. For laying pipe in extreme deep water, the J-Lay tower, positioned at SB side of the vessel can be used and can lay pipe from 4’’ to 24’’ in waterdepths upto 3000m.

The J-lay system has a 750t static and 937t dynamic tension capacity, and is mainly for use in deeper water projects (up to 3000m). Its tower is supported by a gimbal suspension which, in active mode, compensates for the vessel’s motion up to a maximum tower tilt angle of 12+3° over an azimuthing range of 180°. This minimizes the forces on the pipe and lessens bending.

Friction clamps can accommodate coated steel pipe double joints pre-assembled onshore in diameters of 4-24-in. (10-61cm), typically 19-26m long, and weighing up to 30t each. Additionally, the J-lay system can be deployed for constructing risers and installing pipeline end termination structures of up to 100t and tees.

The S-lay system is designed for pipelay in water depths ranging from 25-3000m, and is suited to single and double joints in the range 4.5-46-in (11-117cm) diameter. It can lay 200km in one go operating at full speed. The S-lay equipment spread includes three 200t tensioners and a 200t and 600t A&R winch system. The latter also can be deployed to the vessel’s starboard side to lift manifolds up and onto the seafloor.

The firing line incorporates work stations for different processes, including welding, nondestructive testing, and field joint coating. It can be adapted for 11 single-joint stations or six double-joint stations, depending on the type of pipes to be handled. The three-section stinger is 92.5m long – depending on the project requirements, only one or two sections may be needed – with a stinger radii configuration varying from 70-300m. The S-lay system allows a very steep (close to 90°) departure angle during deepwater pipelay.

Also on board are two work class, 3000m water depth-rated Schilling ROVS that can be deployed using 1500m tethers, facilitating touch-down monitoring of the pipeline during laying.

Onboard power is provided by six 5.76MW diesel generating sets, backed by a 1.6MW MTU emergency generator. The switchboard and engine rooms are configured to ensure stationkeeping thruster capacity at all times for the DP Class 3 redundant dynamic positioning system. This is served by four 3.2MW retractable FP azimuthing thrusters, three at the bow and one at the stern, supported by an 2.5MW tunnel thruster. They can deliver thrust in a full 360° arc as required by the DP system. Main propulsion is by two FP 5.5MW azimuthing thrusters at the stern. The vessel’s service speed is 12 knots. 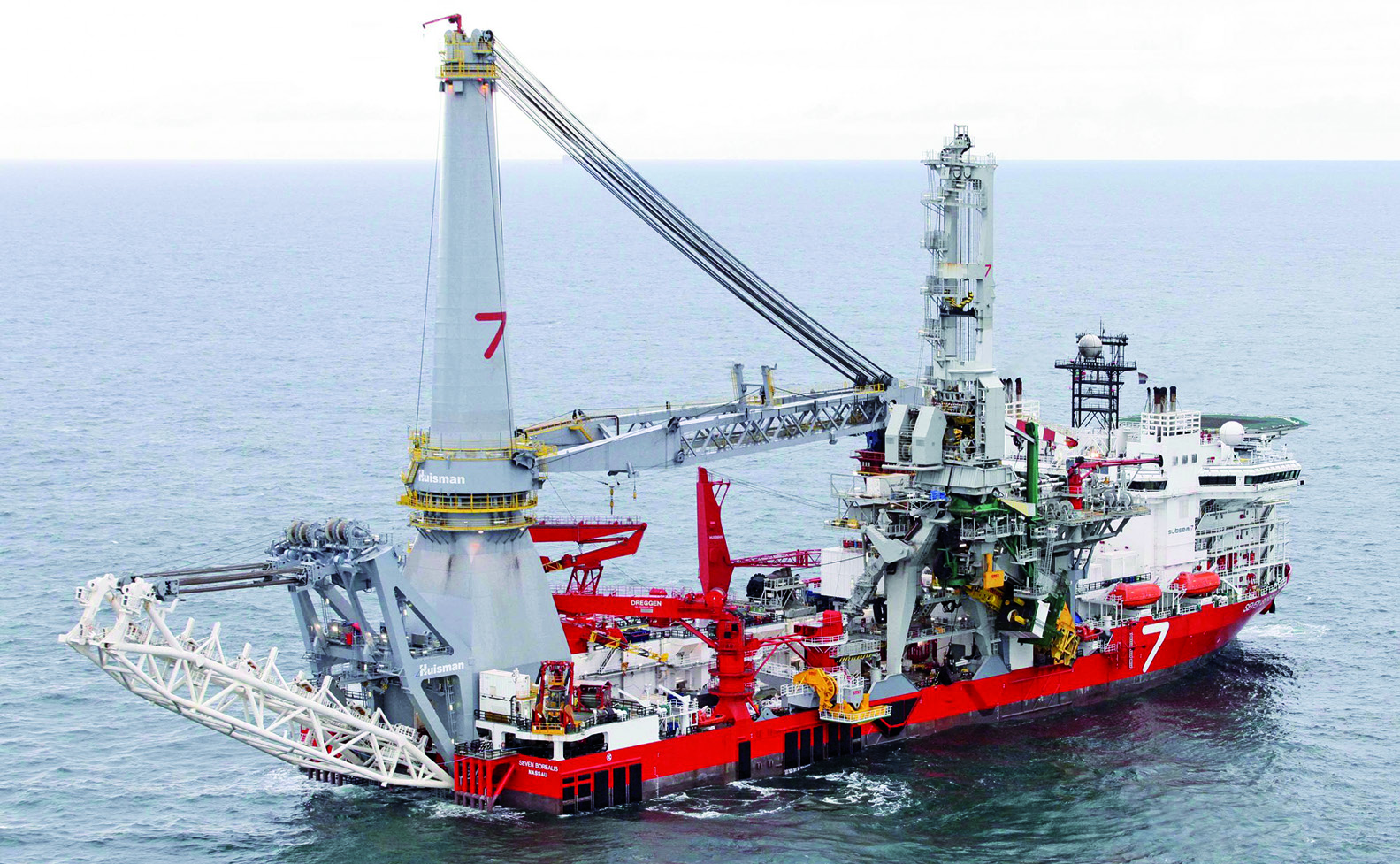