Developed and patented by Ton Kooren, the president of Dutch Towage Company KOTUG, the Rotor Tug represents a new concept in tug design. At its heart, there is a unique propulsion system utilizing three main engines, each driving a fully-azimuthing rudder propeller. Two of these thrusters are positioned forward of the midship section frame and one aft replacing the traditional skeg. This arrangement offers a number of significant advantages; the tug has the ability to turn rapidly in its own length, and apply almost all of its bollard pull  in any direction. The lack of a substantial skeg reduces resistance to turning and cuts down the influence of a ship propeller wash when working in close proximity to large vessels underway.

In 1999, KOTUG introduced four Rotor tugs: RT MAGIC, RT INNOVATION, RT PIONEER and RT SPIRIT to Rotterdam and Bremerhaven in order to extend their market share. Each tug is 31.61m of length overall, with a beam (moulded) of 12.00m, and a working draft of 5.90m. A single chine hull configuration was chosen for the heavily-built steel hull. A semi-raised forecastle gives some protection when the vessel operates at sea and in the escort role. No underwater skeg is fitted but some protection is provided to the propellers and for docking purposes by guard plates and struts. Three very small fins located under the stern enhance directional stability.

Three main engines are installed, each with a maximum continuous rating (MCR) of 2100 brake horsepower running at 1600 rev/min. Each engine drives an SRP 1212 FP propulsion unit, incorporating a five-blade fixed pitch propeller of 2.15m diameter and a Kort nozzle. Power is transmitted through Twin Disc type 3000-2LD Marine Control Drive (MCD) units. The main engines are sited “side by side” across the engine room, with the outboard engines coupled to the forward Schottel units and the center engine driving the aft unit. On trials the tugs produced a bollard pull ahead of 75 tonnes and 73.5 tonnes astern, with a free-running speed of 12 knots.

Each propulsion unit has its own manual controller, giving the tugmaster individual control of thrust direction and propeller speed. A fourth “Masterpilot” controller enables any combination of units to be directed in unison.

Beside the propulsion units, the most impressive feature of these new tugs is the towing equipment and the deck layout. The main towing winch, located on the aft deck, is a “waterfall” type hydraulic winch with three declutchable drums incorporating stainless steel band brakes. Intended principally for towing at sea, the full width upper drum is capable of accommodating 650m of 56mm diameter steel wire rope, along with a 20m long nylon spring rope of 100mm in diameter. The lower drums are used for shiphandling and each carries 200m of 56mmm steel wire rope, with 10m long nylon spring of 48mm in diameter steel wire pennant. Loading and changing towlines is speeded up by the provision of specially designed recessed end terminations, located in the side plates of each winch drum.

Crew accommodation is fitted out to a very high standard. The Rotor tugs will normally work with a crew of three, with additional manning for sea operations. Provision is made for a maximum of seven crewmembers, in three single and two twin-berth cabins. 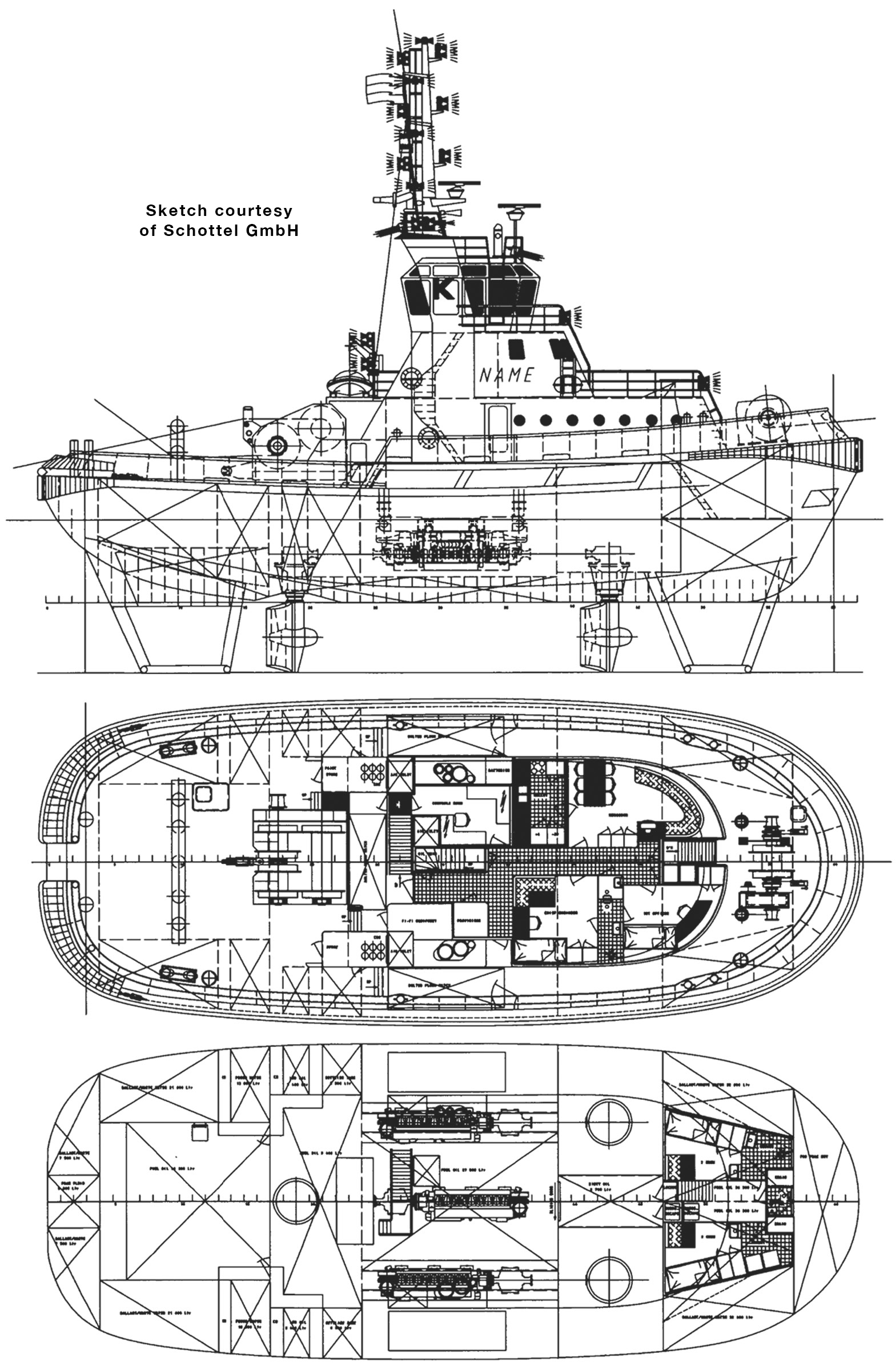