According to Holland Shipbuilding June 2009

The SEVEN ATLANTIC, delivered by IHC Merwede in 2009 to Subsea 7, is one of the largest and most capable diving support vessels in the world. The 24-person saturation diving system includes four 3-man twin lock living chambers, two 6-man twin lock decompression chambers and two horizontal transfer under pressure chambers (chambers are 2.4m internal diameter). The system is designed to comply with Norwegian NORSOK requirements, and features much improved living conditions compared to previous systems. The diving system can be divided at the centreline to allow for two crews working at different depths. From their living quarters, on-shift divers can access either of two saturation dive bells through two large transfer-underpressure chambers without disturbing the off-shift divers.

The diving bells have 7m3 internal capacity and are launched through two athwartshipsmoonpools, positioned near the minimum motion point of the vessel. A comprehensive system of mechanical handling aids is fitted to support saturation and air diving operations,including port and starboard T bars, A-frames, hose reels, tugger winches and umbilical management hoop booms (20m reach from ship side). Two hyperbaric lifeboats are provided (one port and one starboard).

The divers breathe a helium-oxygen mixture for the entire work shift – up to 2-3 weeks. Below the diving installation is a huge storage area for pressure vessels with helium/oxygen mixture. Some of the oxygen bottles are stored on deck for fire safety reasons. As helium is a costly gas, it is carefully retrieved from the divers’ exhaled air and recycled back to storage.

SEVEN ATLANTIC is designed to meet DP3 positioning class, taking into account one failure – including fire and flooding – and will not interfere with the vessel’s station keeping, in this particular case supporting diving in weather conditions of 4.5 m significant wave height. This particularly demanding requirement also influenced the decision to opt for three engine rooms with each two diesel-generator sets and three switchboards, located in fire & flooding separated rooms. With regard to the distribution through the main high voltage switchboard, there are vital separations between the generator fields by means of coupled circuit breakers.

The entire propulsion/thruster package consists of three Wärtsilä fixed pitch propellers in azimuthing nozzles aft, each driven by an Indar propulsion squirrel cage motor with a shaft power of 2950kW. Each motor is controlled through a custom-designed and built direct water cooled frequency drive. Forward in the ship two electrical retractable Wärtsilä azimuth thrusters are provided, each with a shaft power of 2400kW. Control and power supply are again provided through a similar frequency drive for each thruster. All thrusters are equipped with a propeller nozzle to increase the thrust and to minimize the chance of fouling a wire or umbilical. Additionally, there is a transverse tunnel thruster in the bow with a shaft power of 2200 kW, bringing the total installed propulsion power to an impressive 15,850kW.

The SEVEN ATLANTIC is the first IHC Merwede vessel built under comfort class notation CAC(2). This notation imposes stringent noise levels on the crew quarters. These were achieved by placing the cabins in the accommodation block outside the forecastle and by adopting floating floors. In addition, a visco-elastic damping treatment is applied to the hull and bulkheads in the tunnel bowthruster room, which is a major source of noise during DP operations. 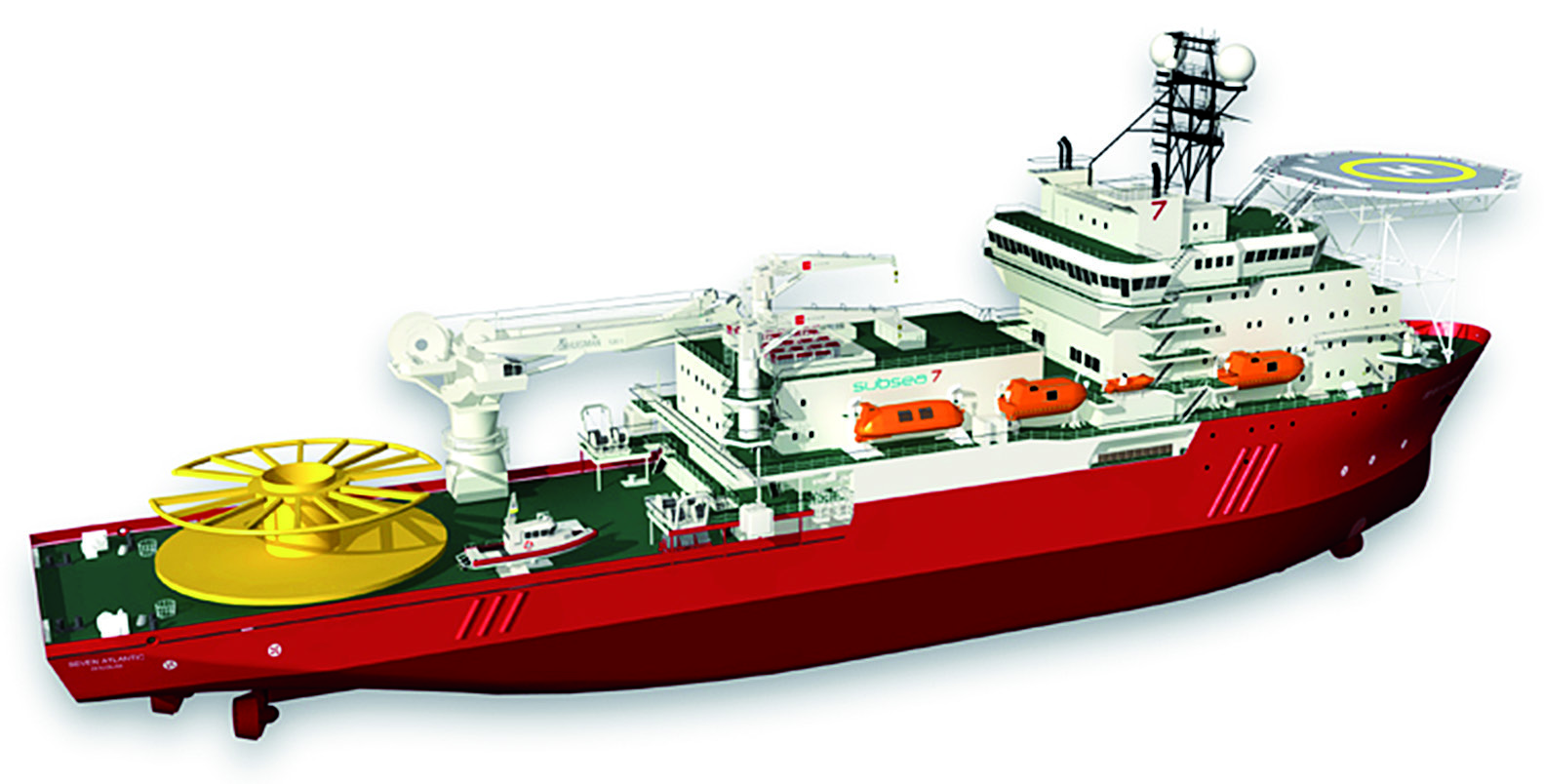