Ships intended exclusively for the carriage of containers and equipped with the appropriate facilities. Such vessels have cellular holds with cell guides attached to bulkheads and container foundations. They can be provided with lift-away hatch covers (the usual solution for bigger vessels), or with folding hatch covers that need more space on deck when open. Deck containers are carried up to 7-high and secured by system of lashing. The capacity of a container ship is expressed in TEU that is twenty-foot equivalent units.

Two four-stroke diesel engines Wärtsilä 9L46D (2x10,395kW) drive a single CP propeller through a twin-in/single-out reduction gear. If the vessel is operating at low speed or in light ship conditions it can run just one engine. The ship is provided with three auxiliary engines Wärtsilä 8L20, 3x1600kW, and one shaft generator 1300kW.

Originally developed for the U.S. for Puerto Rico trade, the container vessel was slowly emerging in the maritime area in the 1950s. Conversions of existing tonnage preceded the first purpose-built containership the Gateway City designed in 1956/7. The development in the container market was slow until 1968, when deliveries reached 18 vessels. Ten of them had a capacity of 1000-1500TEU. In 1972, the first vessels with a capacity of more than 3000TEU were delivered from the German HDW shipyard. They were the largest container ships until the delivery in 1980 of 4100TEU NEPTUNE GARNET.

- Feeders – Very large longhaul vessels have created a parallel need for fast, cost effective vessels as feeders and for regional distribution. Feeder containerships are often geared, their deck cranes facilitate cargo handling in ports with limited infrastructure. Small feeders (below 1000TEU) are normally applied for short-sea transport. The feeders with capacity 1000-2500TEU are normally applied for feeding very large vessels, but are also servicing markets and areas where the demand for large container vessels is too low.

- Hatchcoverless container ship, also open-top container ship – The concept of the containership without hatch covers developed to reduce turnaround time in port and cargo handling costs by eliminating the need to remove and replace covers, and to fit and remove twistlocks and lashing the deck containers. To prevent flooding, the open-top vessel has the increased freeboard and bilge-pumping system designed with the capacity to cope with the volume of water predicted to enter the open holds during the worst sea conditions and severe tropical storms.

Eliminating the hatch covers allows continuous cell guides to extend from the holds to secure the deck containers. The hatchcoverless concept offers the benefit of safe container stowage without the lashing. Furthermore, the open ship configuration gives considerable advantages with respect to heat disposal from cargo holds.

The first hatchcoverless containership was WESTPHALIA: a converted barge carrier completed as JOSEFA TORRES by the Sestao yard of Astilleros Espanoles in 1983. All the design and certification work as a hatchless containership was done by V.Ships of Monaco. Cell guides were manufactured and fitted by RNL at Dunkirk, France. WESTPHALIA entered service in January 1989, and made two round trips to Australia before starting a feeder service in the Arabian Gulf. She calls at ports in the United Arab Emirates, Saudi Arabia and Kuwait, and everyone agrees that the cell guide concept without hatch covers saves a significant amount of port time. The ship was classed by the ABS and flies the Liberian Flag.

Amongst the earliest hatchcoverless vessels were BELL PIONEER ad EURO POWER which came into service in September 1990 and September 1992 respectively. These vessels have been employed in intensive short-sea services both in the Pacific and European regions, and have encountered severe weather conditions, including tropical storms and high wave conditions. During this time, containers neither have suffered water damage, nor have been crushed in the cell guide system.

The largest hatchcoverless container vessel, the 4112TEU capacity NEDLLOYD HONGKONG was delivered in February of 1994 by Kure Shipyard of Ishikawajima-Harima Heavy Industries. The ship has been designed purely as a larger, post-Panamax version of the earlier Nedlloyd Asia class and designated as “The Ultimate Container Carrier”.

To cope with water intake in the holds of NEDLLOYD HONG KONG, two separate pumping systems have been arranged to serve the fore and after ends of each compartment. Container sockets in holds are 30cm higher than on conventional ships to allow water ingress to flow freely underneath. Gutters running along either side of the hold lengths drain water into the four bilge wells. Activation of the pumping system is either by automatic level controllers or by manual operation. See also Hatchcoverless container ship NORASIA FRIBOURG and Open-top reefer container vessel DOLE COLOMBIA.

- Panamax container ship – A vessel of no more than 294.3m long and 32.3m wide to cross the Panama Canal. The capacity of such dimensioned vessels has developed a very long way from the 3000TEU of the early 1970s versions, to the 5100TEU intake of optimized Panamax containerships.

- Ultra large container ships – The size of container vessels has been dramatically increasing in recent years, exploiting the advantages resulting from the economy of scale. The MAERSK ELBA with beam 48.2m (17 rows in hold and 19 rows on deck) has capacity of 13,100TEU and weights over 43,000t. The CMA CGM MARCO POLO has beam 53.6m and capacity of 16,000TEU.

In June 2013 Maersk Line’s first 18,270TEU Triple-E containership was delivered by the Daewoo Shipbuilding and Marine Engineering shipyard at Okpo. Currently, the largest container vessels on order are of 18,400 TEU in size.

While in the past the selected design speed has been approximately 25 knots and higher, lately the preferred design speed has been reduced to 23-24 knots, and even lover. The dual engine installation of Triple-E vessels is intended to ensure a top speed of 23kts, 2 knots less than that of the 15,500TEU EMMA MAERSK. Despite of the 16% increase in payload, the power requirement is in the order of 65,000-70,000kW, some 19% less than 80,000kW, single–engine installation in EMMA MAERSK. 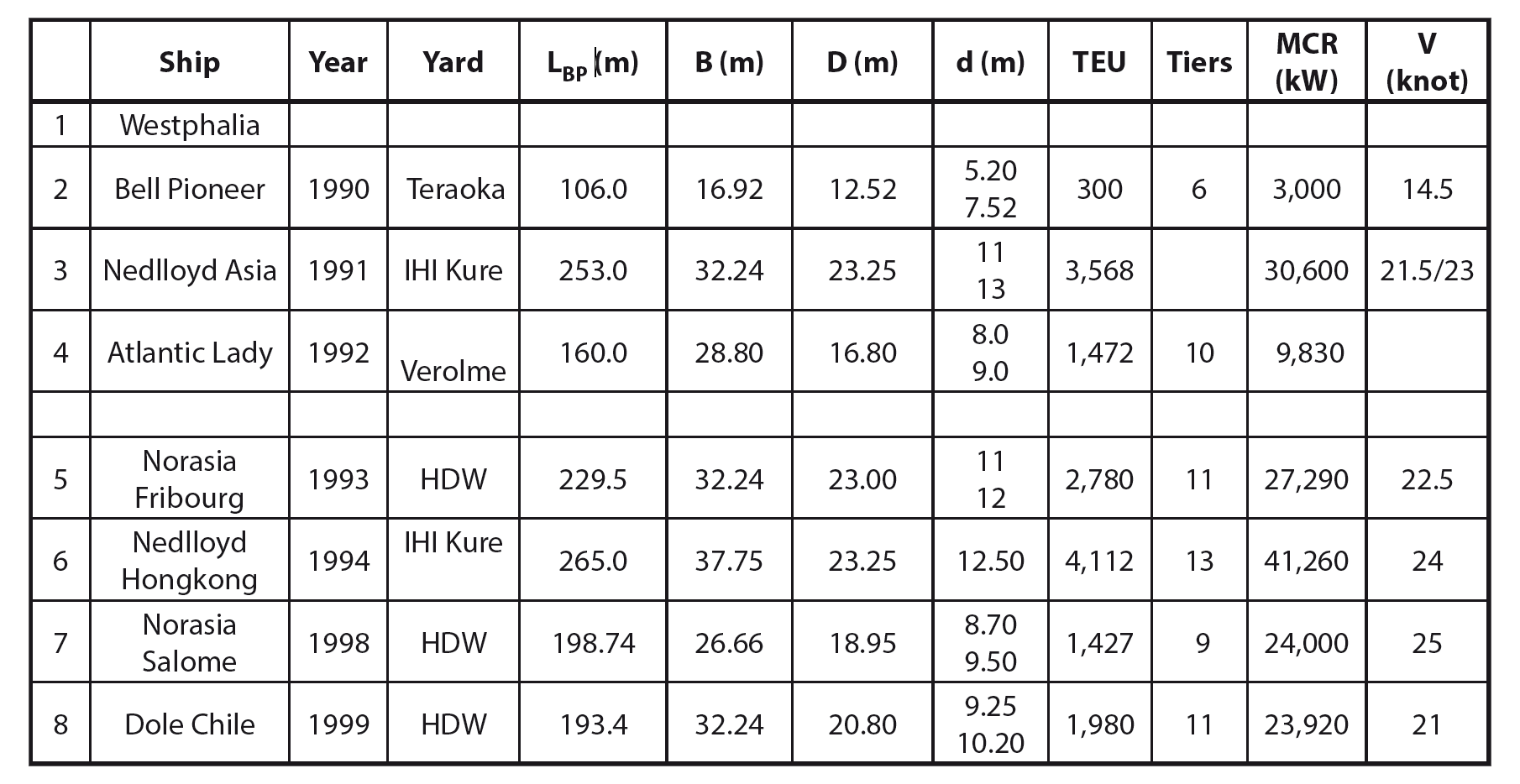 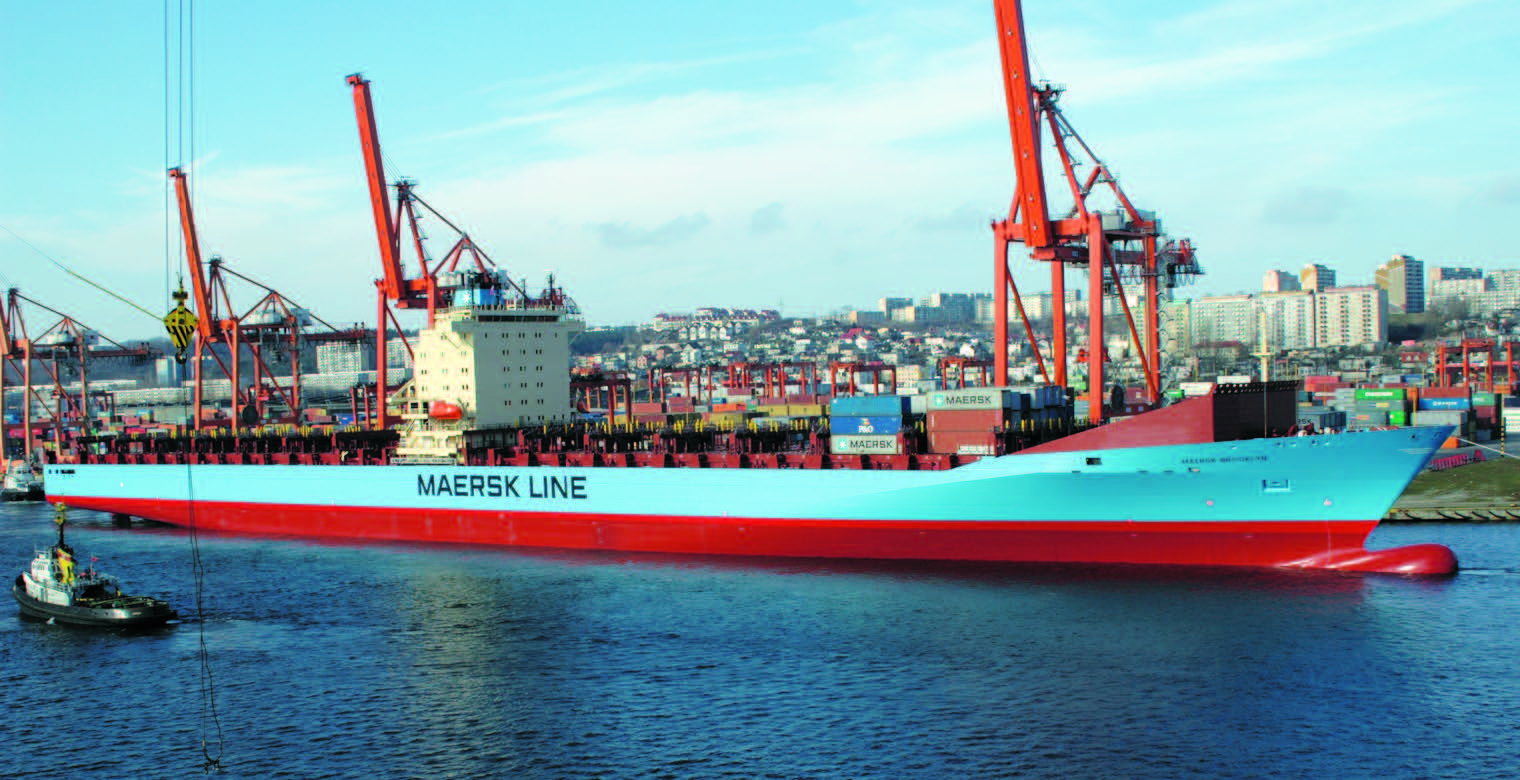 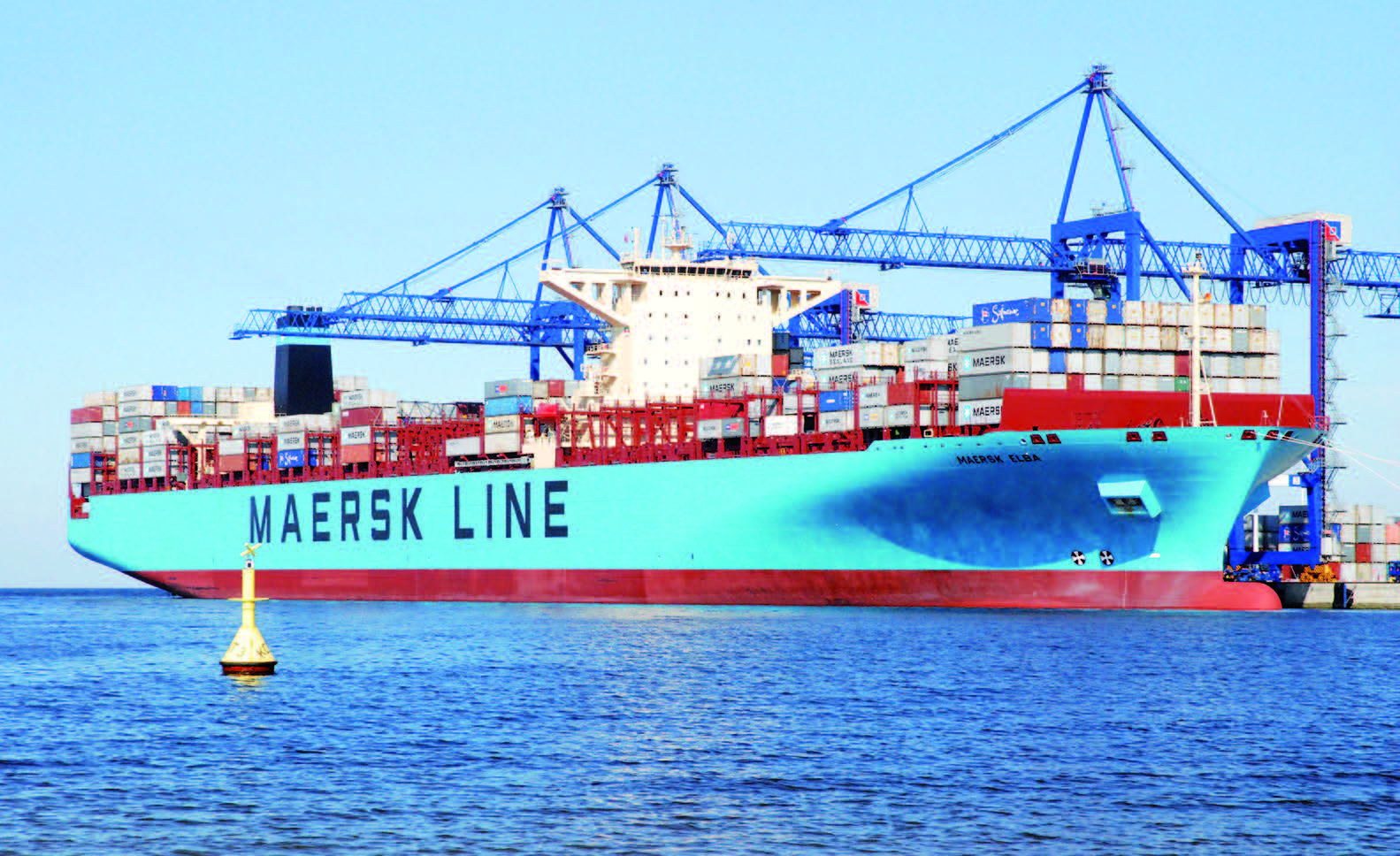 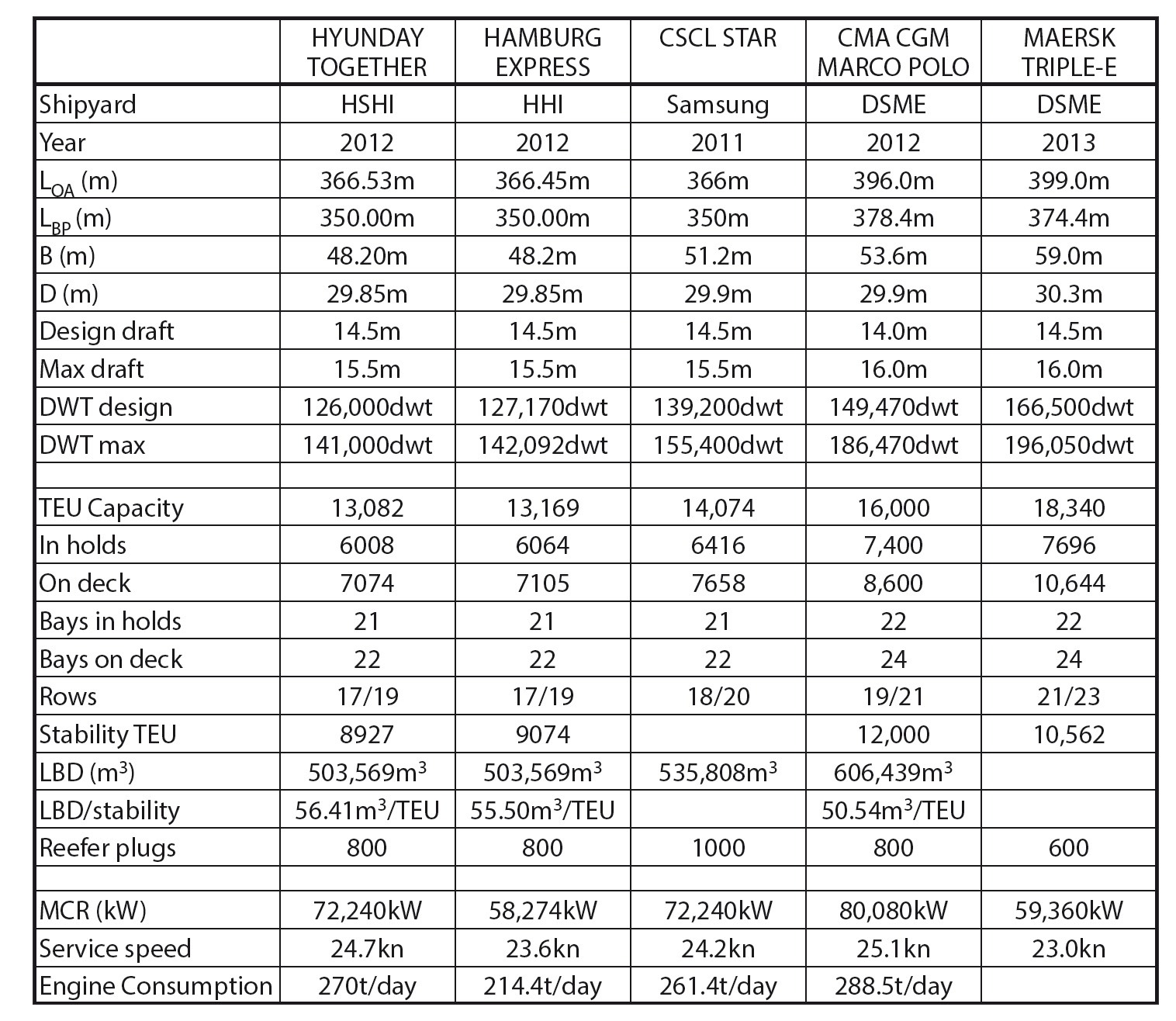