Chemical cargoes can be very dangerous, most of them being flammable and/or toxic, some of them extremely so. The IBC Code defines three types of chemical tankers: ST1, ST2, and ST3.

- ST1 is a chemical tanker intended to transport most dangerous products, which require maximum preventive measures to preclude an escape of such cargo. Accordingly, a type 1 ship should survive the most severe standard of damage stability and its cargo tanks should be located at the maximum prescribed distance onboard from the shell plating.

- ST3 is a chemical tanker intended to transport products requiring moderate degree of containment to increase survival capability in a damaged condition.

The IBC Code lists, in its fourteen chapters, the requirements that must be satisfied by a ship prior to it being certified as a chemical tanker regardless of the specific cargoes it is intended to carry. Within each chapter the designer is given an option of the level of compliance required. If compliance with the more onerous requirements is chosen, the ship will be more sophisticated and will therefore be able to carry the more hazardous cargoes.

Chapter 15 of the Code contains ‘Special Requirements’ which are cargo specific and which must be complied with only if that specific cargo is to be carried. Chapter 16 addresses aspects, which are the responsibility of the operator, whilst Chapter 17 lists all chemicals considered being suitable for transportation by sea. Chapter 17 also summarizes the minimum requirements pertaining to ship arrangements and equipment, which is required to be complied with for the carriage of each chemical, so listed. The list is regularly reviewed and updated by the IMO to ensure that it contains all products regularly transported by sea and that the carriage requirements remain pertinent.

The basic requirements, which must be satisfied prior to the carriage of any cargo listed in the IBC Code, relate to the general arrangement of the ship. As with oil tankers, the accommodation and engine room are required to be situated aft of the cargo tanks. A cofferdam is required at the forward and aft ends of the cargo spaces to further segregate the engine room. Cargoes which, if released into the sea following an accident, would pose a significant hazard to the environment are required to be carried in tanks with no boundary adjacent to the sea – that is, tanks protected by a double skin of hull plating (a longitudinal bulkhead and inner bottom, in addition to the shell plating). Cargoes posing a minimal threat can be carried adjacent to the ship shell plating – that is, either in the centre or wing tanks. The ship must be able to withstand predefined deterministic damages to the hull structure without catastrophic loss of stability, buoyancy or cargo. This ‘damage stability’ requirement is once again more onerous for those cargoes posing greater hazards.

The major hazards associated with the safe transportation of liquid chemical cargoes in bulk relate to cargo compatibility, toxicity and flammability. The problem of compatibility of each cargo with the materials used in the construction of the ship and its equipment is significant and the list of cargoes in the IBC Code highlights those cargoes which will react with specific materials.

Cargoes, which react in a hazardous manner with one another, are not permitted to be carried in adjacent cargo tanks or to use common ventilation or pumping and piping systems. Cargoes, which are water-reactive, are not permitted to be stowed adjacent to the ship hull or to ballast tanks containing seawater. Heat-sensitive cargoes, which may polymerize, decompose, become unstable or evolve gas, must not be loaded in tanks adjacent to cargoes, which require to be heated to maintain pumpability. Tanks containing heat-sensitive cargoes are required to be fitted with an alarm system, which continuously monitors the cargo temperature.

The risk of cargo spillage during loading, transfer or discharge operations is high. The crew is required to be provided with chemical resistant overalls, boots and gloves. Showers and eyewashers are required to be available on deck so that in the event of an accident involving the crew, water is immediately available.

Antidotes for all cargoes carried must be available on board in accordance with the Medical First Aid Guide produced by the IMO. Many cargoes listed in the Code are toxic and the crew and shore-based personnel involved in cargo operations must be protected from toxic vapors. When carrying toxic cargoes, chemical tankers are required to have additional chemical-resistant suits and self-contained breathing apparatus suitable for use in a toxic environment. All toxic vapours displaced from a cargo tank during loading must be vented directly to shore reception facilities through a vapour return line.

Many cargoes are required by the Code to be carried in a controlled inert atmosphere, either because of their flammability, toxicity or to prevent oxygen from adversely affecting the quality of the cargo. Bottled nitrogen is normally supplied to the ship for this purpose; however, many of the more sophisticated ships have a nitrogen generating plant installed on board. Unlike on oil tankers, exhaust gas from the main engines is insufficiently clean for use on chemical tankers, and could impair the cargo quality demanded by the shipper. When carrying cargoes, which evolve highly flammable gases, the Code requires that all electrical equipment installed within their vicinity shall be specifically designed for use in hazardous atmospheres. To assist the designer in the selection of safe electrical equipment, the Code lists the temperature class and apparatus groups, as defined in the International Electrotechnical Commission’s Publication’79, for each of the flammable cargoes in the code.

Cargo tank deck foam and firemain systems are required for fighting fires in the cargo tanks or as a result of cargo spillage. The foam compound used must be compatible with the majority of cargoes carried on the ship and an alcohol-resistant foam compound is normally supplied. When cargoes are carried for which foam or water is unsuitable, an alternative fire extinguishing system using a medium such as dry powder must be supplied.

Most modern chemical tankers do not have a dedicated cargo pump room, and normally fit a deepwell cargo pump directly into each cargo tank. Each pump has its own dedicated piping system and cargo discharge manifold. The main advantage of this system is that it enables a large number of different cargoes to be discharged or loaded without the need for time-consuming pipe flushing between each cargo. The cargo piping is required to be constructed of a material compatible with the cargoes carried. To minimise the risk of cargo leakage, all joints – except those to valves or expansion pieces must be welded. 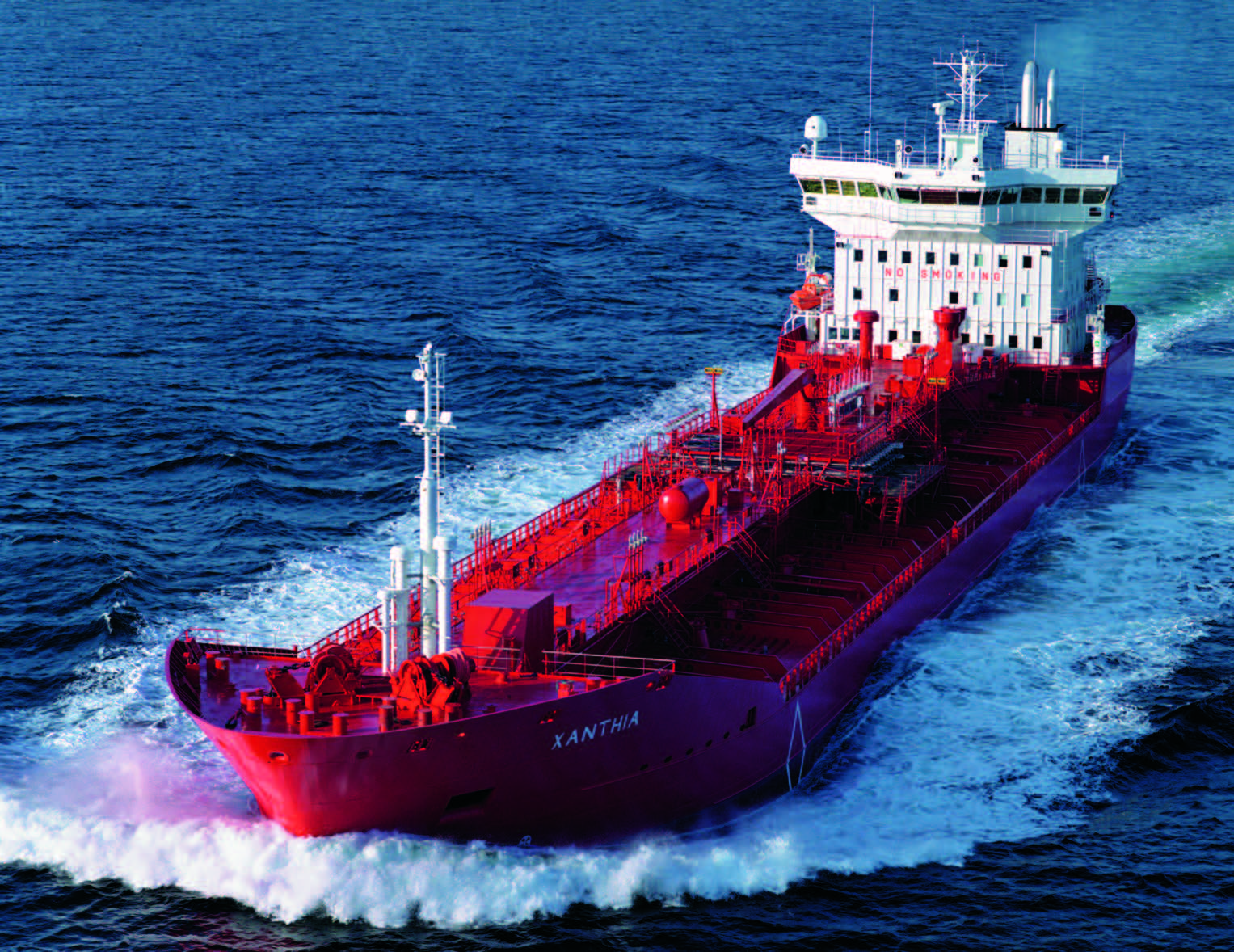