Skating to the Stars

A lot of kids skating on outdoor ice all over Finland dream of one day raising the Stanley Cup, the championship trophy of the National Hockey League (NHL). 18-year-old Miro Heiskanen is well on the way to making this dream come true. Twentyfour7. spoke to the young athlete just ahead of the World Championship tournament.

A lot of kids skating on outdoor ice all over Finland dream of one day raising the Stanley Cup, the championship trophy of the National Hockey League (NHL). 18-year-old Miro Heiskanen is well on the way to making this dream come true. Twentyfour7. spoke to the young athlete just ahead of the World Championship tournament.

Some feelings are too big for words. For Miro Heiskanen, future Dallas Stars defenceman, one such moment was in Chicago, Illinois in June last year, when he heard his name announced in the NHL Entry Draft.

“It’s impossible to describe how it felt,” he says now, smiling as he recalls the event. “It was nerve-wrecking to sit in the audience and wait for them to say my name, so in some way it was also a relief.”

Heiskanen was picked third overall in the draft, meaning that only two players were selected before him. The last (and not to mention only) time a Finnish defenceman was ranked so high in the NHL Entry Draft was back in 1995. Even so, Heiskanen wasn’t surprised to be in the top three.

“I’d been talking to people before the event, so I assumed I’d make it pretty high up,” he admits.

So was he disappointed his name didn’t come in first?

“Not at all,” he says laughingly. “I was plenty happy with the third place!”

It all starts with fun

However, it’s not time for NHL just yet.

This season, Heiskanen played on loan from Dallas Stars with his home team IFK in Helsinki. Despite the looming career in North America, his HIFK teammates still treat him like they always have. After all, he has played with them since he was 14.

“Nothing’s changed at all,” he says. “I get along really well with everyone.”

As of 2016, Wärtsilä has been a major partner of HIFK, which is one of the frontline teams in the Finnish Elite League. Wärtsilä’s support is targeted at enabling young talent to make it to adult level. This season, Heiskanen had a key role when HIFK finished ‘Liiga’ with a bronze medal. Especially during the playoffs, the youngster was given plenty of responsibility on ice.

The basis, he says, is built from a very young age. Heiskanen doesn’t believe in making miracles; what matters is hard work and perseverance.

“When I was a kid, we were learning the basics very thoroughly. Our coach was demanding but fair and nice at the same time. I think that’s where it all comes from.” 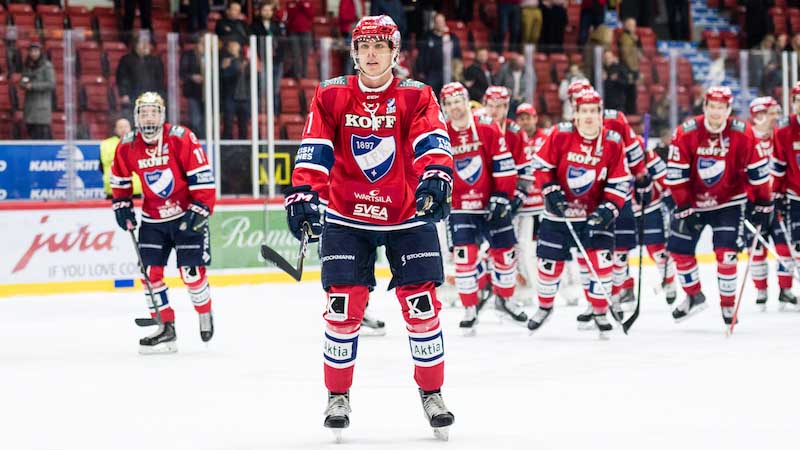 Miro Heiskanen played on loan from Dallas Stars with his home team IFK in Helsinki, this season.

On ice with the best

Come autumn, Heiskanen will be facing the big move across the Atlantic. Together with his girlfriend, a new life awaits him in Dallas, Texas.

Heiskanen says he will not stress out about his performance. Instead, his plan is to focus on what he does best: playing hockey. The rest will follow.

As a player, Heiskanen describes himself as calm and skilled with the puck. One of his role models is Pavel Datsyuk the Russian ice hockey player, also known as The Magic Man. Heiskanen admires Datsyuk’s playing style as well as his ability to read the game.

Soon, Heiskanen will be seen on ice with today’s Finnish hockey heroes. This year will be the first time Heiskanen plays in the World Championship tournament as an adult.

He’s excited to wear the blue and white shirt to represent Finland.

“I just hope I’ll have a chance to play as much as possible and get to experience the level in general, as there will be a lot of NHL players on ice,” says Heiskanen. “Of course, I hope we’ll score well and I won’t just be a slalom stick for others to skate around!”

The biggest dream remains the same: Stanley Cup. Heiskanen notes that the trophy is probably the main target for most players in the world.

However, he’s aware that not everyone makes it to the top. Even if professional ambitions lie elsewhere, Heiskanen would like to encourage everyone to stick to hockey as a hobby.

“The level you play on really doesn’t matter. It’s still good exercise and a fun way to spend time with friends.”