HIFK’s Saara Niemi is ice hockey from head to toe

Saara Niemi, the head coach of HIFK women’s team Stadin Gimmat, wants to get girls and women on ice. Even though her dream of NHL stardom never happened, ice hockey has defined the route she’s taken in life, leading to incredible opportunities, plenty of friends, and even a visit to the White House.

Saara Niemi, the head coach of HIFK women’s team Stadin Gimmat, wants to get girls and women on ice. Even though her dream of NHL stardom never happened, ice hockey has defined the route she’s taken in life, leading to incredible opportunities, plenty of friends, and even a visit to the White House.

Vancouver, Canada, February 2010. Saara Niemi (née Tuominen) is on ice and the then-Finnish president Tarja Halonen in the audience. The ice hockey-crazy Canadians make sure that the atmosphere is just as intense as it should when two dear neighbours and rivals, Finland and Sweden, are playing for something as precious as an Olympic medal.

“There aren’t a lot of situations in life that can get me as energised as that did,” Niemi recalls. “The birth of my son, of course, but not much else.”

As the alternate captain of the team, Niemi had been one of the leading figures throughout the tournament. Despite various other great achievements during her years as a player, Vancouver stands out as one of the most memorable ones.

“I still get shivers when I watch the clip on YouTube,” she admits.

After the puck hit the net, she didn’t have much time to celebrate. That night, she had to fly back to Minnesota to continue playing with her university team at the University of Minnesota Duluth (UMD). Just a little later, UMD Bulldogs won the championship of the league, a win that took Niemi and her team mates to visit the White House. 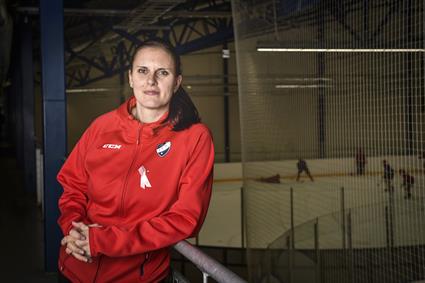 Saara Niemi hopes to be a role model for many young girls dreaming of a career in ice hockey.

Initially, Niemi planned to play in the NHL. Up until she was 12 years old, that is.

“It was a tough spot to be told that I would never be accepted because it was for men only,” she tells. “Fortunately, it turned out there are other opportunities.”

For a dedicated worker, there sure were. Until she turned 15, she played with boys, and then she joined a girls’ team. She attended a sports-focused upper secondary school, and after graduation received a full scholarship to study at UMD.

First, Niemi studied biochemistry, but after the first year she switched to sport sciences. That, she says now, has been one of the best decisions she has ever made, and definitely a factor on her route to where she is now: the head coach for HIFK women’s team Stadin Gimmat.

The team is facing a serious season: at the moment, it’s aiming to qualify for Mestis, the second highest ice hockey league in Finland. Next year, Niemi hopes to see them playing in Finnish national women's league.

The team works hard, but one of the difficulties stems from an inconvenient place: wallets. Women’s sports just don’t tend to receive the same attention, and thus finances, as those of men.

The situation is all too familiar from Niemi’s own career.

“Women are always obliged to have another source of income even if they’re playing professionally. For men, it’s much more possible to drop out of school or working life altogether to focus on sports.” 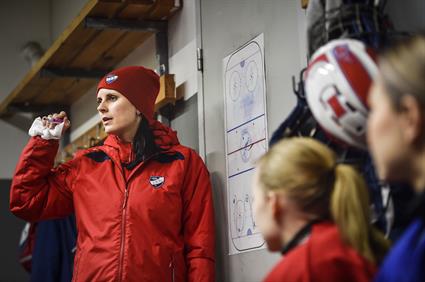 The traditional gender divisions are slowly changing, and Niemi has been thrilled to see sponsors, including Wärtsilä, supporting women’s teams, too. For example, this season Stadin Gimmat players don’t need to pay for playing, as expenses are covered by partners.

Having a child doesn’t need to mean the end of time on ice for women, either. Stadin Gimmat has two mothers in the team, and Niemi, who’s technically on maternity leave, brings her six-month-old son to the practices all the time.

“He’s a happy guy and seems to sleep really well listening to the puck hitting the walls,” she says laughingly.

Although her son will have not only his mother but plenty of idols in hockey to look up to, Niemi hopes to be a role model for many young girls dreaming of a career in ice hockey, in or outside the rink. She points out that although we’ve come a long way when it comes to gender equality in professional life, sports, for some reason, haven’t followed suit.

“It’s important for us all to be able to pursue our dreams. I hope I can be someone young girls look up to.”