Ice hockey is both pain and gain for Teemu Tallberg

To an athlete, injuries are painful experiences on a lot of levels: not only do they actually hurt, they also force ambitious sportsmen and women to take a break from the thing they love doing the most. HIFK’s forward Teemu Tallberg decided to learn from his recent recovery period and jump back on ice as an even better player.

To an athlete, injuries are painful experiences on a lot of levels: not only do they actually hurt, they also force ambitious sportsmen and women to take a break from the thing they love doing the most. HIFK’s forward Teemu Tallberg decided to learn from his recent recovery period and jump back on ice as an even better player.

For Teemu “Tale” Tallberg, this season has been the first he’s had to sit on the bench watching his HIFK team mates fight for victory on ice. First, because of an injury in his upper body, he had to take a break of eight weeks; and right upon his return, in the very first match, he hurt his lower body, and faced yet another recovery period of 10 full weeks.

Now, he’s back and running on full steam. A couple of days before playoffs are set to begin, the 27-year-old is feeling relaxed and excited about tough matches ahead. HIFK is amongst the eight best teams in the Finnish Elite League, and the highlight of the year hopefully awaits when the winner of the league will be announced.

Throughout the broken season, Tallberg decided to stay positive and not let his mood be affected by the recovery. He freely admits that initially, it wasn’t very easy for someone who loves to play and be part of pushing the team to perform better and better.

“You definitely learn patience when you’re not allowed to play,” he says. “After an injury, you can’t expect to be back in shape in no time.”

As the injuries were the very first mid-season ones for Tallberg, he had to adopt an entirely different approach. He couldn’t help out his team on ice, so he chose to do his best off it.

“When you’re playing, you don’t get to see the game from within a distance. This time I was able to really watch the game from afar, pay attention to what works and what doesn’t, and then share my insights with the rest of the team in the locker room.”

The aim was always to make a comeback, and Tallberg never lost his determination. In general, he’s learned that hard work tends to pay off – and nothing comes for free.

“Even when you’ve achieved something, you can’t take it for granted and expect it to happen again with zero effort,” he notes. “If anything, winning again takes extra work.” 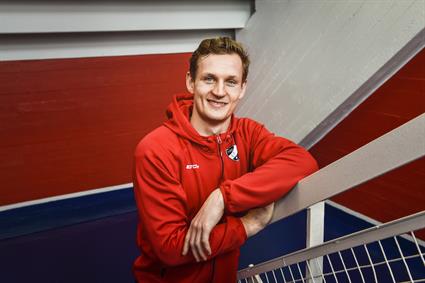 A Finnish way of relaxing

Speaking of achievements, Tallberg has an impressive track record. He was part of the HIFK team that topped the Finnish Elite League in 2011, and as a junior, he scored various colours of medals in the national team. Now, he’s dreaming of a spot in the national team as an adult as well as playing abroad at some stage.

However, personal aims are always surpassed by the ones of the group. HIFK has been Tallberg’s team since he was a teenager, making the rink in Helsinki feel like another home and the team, like family.

As a strong and straightforward player with the ability to build and develop the game, Tallberg also wants to be a reliable and supportive team mate both on and off ice. Having a good time with friends was one of the reasons he spent his youth playing ice hockey, bandy and football – all team sports that require team spirit.

Even after years living the sport day in and day out, winning never gets old. When things go sour and the puck doesn’t fly, Tallberg recharges his batteries possibly in the most Finnish way possible: in nature, preferably by the sea or a lake, frozen or not.

“That’s where I find peace and calm and forget about all rush and stress. Even if we’ve lost a match, I know there’s always something else to look forward to.” 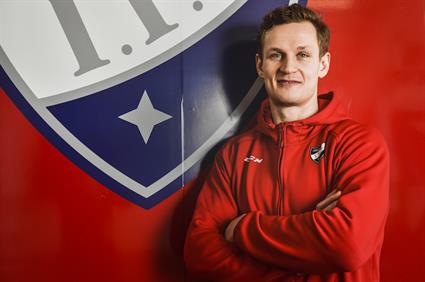