Company
Home
Insights
Energised by people – on and off ice

Energised by people – on and off ice

For Tobias Salmelainen, HIFK has been a special team ever since he pulled a pair of skates on for the first time. Now, as a general manager, he’s responsible for the gang in its entirety. Let’s hear how his career has led him from ice to the head office.

For Tobias Salmelainen, HIFK has been a special team ever since he pulled a pair of skates on for the first time. Now, as a general manager, he’s responsible for the gang in its entirety. Let’s hear how his career has led him from ice to the head office.

“A real surprise!” “A surprising choice!” “Out of the blue!”

In the grand scheme of things, having a Salmelainen play an important role in the team was – and is – nothing new. The time of the announcement of his new post also marked the 50th anniversary of the first time his father Tommi Salmelainen played a match wearing a HIFK shirt. Since then, both Tobias and his older brother Tony have played for HIFK, and their mother Sirpa was one of the founders of HIFK Ladies.

“I’ve played for various other teams, but HIFK has always been special to me, having watched the first matches sitting on my dad’s lap,” Salmelainen says. “I’m really glad that the people appointing me were ready and willing to look outside of the box and believe in me.”

Looking at Salmelainen’s merits both on and off ice, the choice might not seem as startling. On top of well over 100 matches in the Finnish Elite League, even more in the Championship series and a season in Denmark, he holds a master’s degree in sport management from Johan Cruyff Institute as well as has experience in working as an agent for Acme World Sports Finland.

Being a general manager of HIFK is not just a job for Tobias Salmelainen – it's a lifestyle.

Eyes open to all directions

As a general manager, Salmelainen has to stay on top of his game – quite literally.

“It’s not just a job, it’s a lifestyle,” he explains. “I need to keep track at all times, and weekends are reserved for games throughout the season.”

All team members work very hard, be it on ice or in the office. As a former professional player himself, Salmelainen understands the struggles players have to face, just as he knows how success feels.

For Salmelainen, giving up playing wasn’t a voluntary choice, but an imperative posed by injuries. Between the ages of 19 and 23, he spent a total of 22 months on sick leave.

In the beginning, it was difficult to stay off the rink.

“It was hard to see someone I used to play with win and not be able to be there myself,” he notes. “Now I’m used to it, and I also remember how much it used to hurt!”

Staying out of the game physically doesn’t mean that Salmelainen’s emotional involvement would be any less intense. No matter how well prepared the team is, things don’t always go as planned, and hence there are inevitable disappointments that need to be dealt with.

“If anything, feelings and reactions are stronger when I’m just watching instead of playing. There are so many things I can’t control that a match can turn into an emotional rollercoaster.” 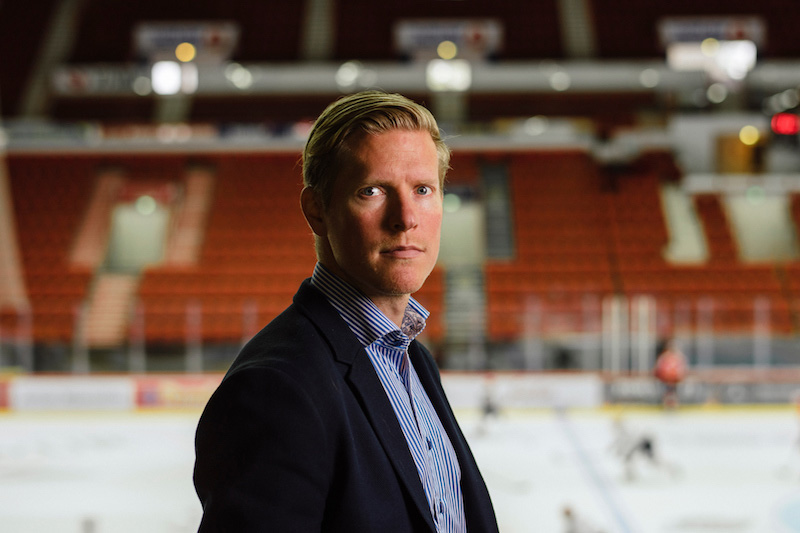 Tobias Salmelainen says, that he wants to treat people equally and with respect regardless of titles.

As Salmelainen is in charge of a lot of things simultaneously, the job is very energy-consuming. Fortunately, he is energised by the people he works with.

“Some say that the job of a general manager is a lonely one, but it’s only that if you make it so. We all share the same goal, be it in the office or on ice.”

Being a boss for many, Salmelainen needs to know how to motivate and inspire both players and other HIFK team members. That’s when business cards and golden helmets are stripped off.

“I want to treat people equally and with respect regardless of titles,” he points out. “We all need to have the opportunity to speak up and be wrong, and I want our atmosphere to support that.”

Despite the hefty responsibilities, Salmelainen feels like he’s in his dream job, working with the sport he’s loved from a very early age. Being energised at and by the work he does means that bad days are few and far between, and on the best days he doesn’t feel like going home at all.

“When I’m full of energy, time just flies by. An hour doesn’t feel like an hour.”