Anton Lundell is always in it to win it

When you are a two-time world champion already at the age of 17, what goals can you set for the future? Plenty, if you ask HIFK’s young superstar Anton Lundell. Read what the man has to say about his love for his hobby-turned-profession.

When you are a two-time world champion already at the age of 17, what goals can you set for the future? Plenty, if you ask HIFK’s young superstar Anton Lundell. Read what the man has to say about his love for his hobby-turned-profession.

Yet, Anton Lundell will never take a medal for granted. He can feel pretty confident looking at the NHL Entry Draft in 2020.

“If anything, you appreciate it a whole lot more once you know how much work goes into it,” he explains. “Winning a tournament or topping a league is really difficult, and the smallest of things can make a huge difference.”

And there are still big wins Lundell would want to collect, ranging from the Finnish Elite League all the way to the premier professional league NHL. A gold medal from the Men’s World Championships would be nice, too.

Filled with ambition, Lundell never underestimates his opponents. He is competitive and wants to give it his best, whether it is practising with his friends for fun or the real deal.

“You can’t think a match will be easy or that you’ll win for sure. Each and every medal needs to be deserved, and that’s especially the case with the golden one.”

Plenty of plans ahead

In the rink, Lundell is a professional, but outside of it, he’s still got school to finish. Currently he’s got no time to attend classes in person, so he studies at home, completing tasks given to him by his school.

“Right now, hockey comes first. I’ve made it quite far, so I want to focus on it as much as I can.”

In 2020, when Lundell will be old enough for the NHL Entry Draft, he’d like to hear his name called very early on, meaning that he’d be selected as one of the most wanted players. However, plenty of matches remain to be played before North America might be calling.

All things considered, it’s safe to say that for a player like Lundell, NHL is not just a pipe dream. He’s got no specific team or state on his mind; his aim is to be able to try his wings in the league, with whomever it may be.

For now, he’s with HIFK, which has been his team of choice ever since he was 11 years old. Wearing the red shirt is a matter of pride for him.

“Although I started with a local team in Espoo, I’ve always been a HIFK guy. At home games, the energy is higher than anywhere else.” 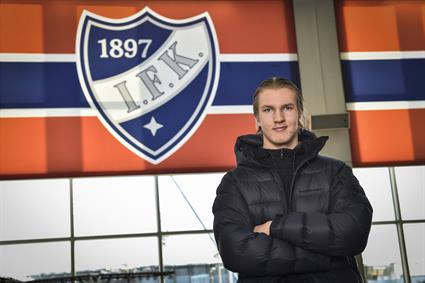 One for all, all for one

Speaking of energy, ice hockey is predominantly a team sport, where one person having a bad day can affect the entire group. Lundell is thankful for all the support and help he has received from HIFK, and also from his coaches and team mates.

“I’m willing to take all the help I can get,” he notes. “I want to become better and better all the time, and only time will tell if and how it’ll pay off.”

An abundance of support comes from home, too. Lundell’s father Jan is a former HIFK goalkeeper and now a coach, and his 14-year-old brother is a keen hockey player, too. The siblings have spent a lot of time practising together, and there’s no competitive element between them; they both want each other to try their hardest and become the best they can.

Lundell believes that his family background has had an impact on his career choice. Hanging out at the hall ever since he was born has made him live and breathe the sport.

“It’s the love for hockey that brings me the energy I need,” he tells. “Even ahead of a heavy practice, I’m motivated by the fact that it’ll always make me a better player. Particularly when I get back on ice after a break, the feeling is so great that I remember why I’m doing it all.”