In 1952, when the ‘SS United States’ crossed the Atlantic at an average speed of 35.59 knots, it took the coveted Hales Trophy and held it for 38 years. It was a record that many thought unlikely ever to be beaten. But beaten it was. In 1990, the 74 metre ‘Hoverspeed Great Britain’, built in Hobart by Incat Tasmania and powered by Wärtsilä waterjets, made the voyage from New York to England in 3 days, 7 hours, and 54 minutes at an average speed of 36.97 knots. 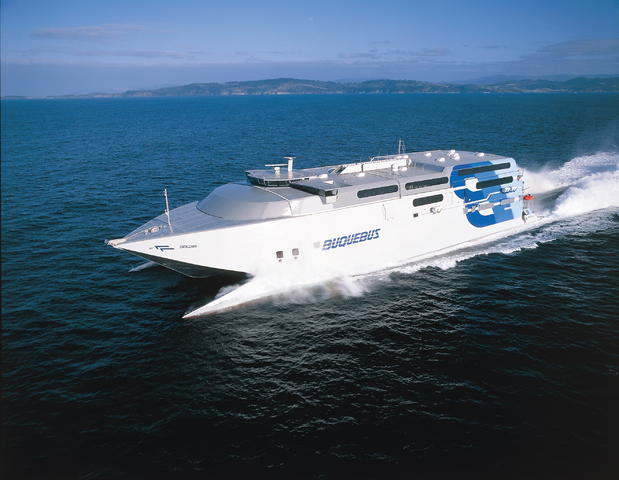 This hugely successful partnership between Incat’s wave-piercing designs and Wärtsilä’s powerful modular waterjets has continued since that time. In 1998, it led to the winning of the Hales Trophy yet again, twice in fact. In June of that year, the 91 metre ‘Catalonia’ made the voyage at the incredibly fast average speed of 38.88 knots, only to be surpassed one month later by the 91 metre ‘Catlink V’. Despite heavy seas and having to assist in the search for a missing light aircraft, the ‘Catlink V’ was able to average 41.2 knots for the voyage, thus setting a record that still stands.

During the 30 plus years since Incat and Wärtsilä first developed a winning formula for high-speed passenger vessels, Wärtsilä has delivered 182 modular waterjets for installation on Incat ships.

The vessels continue to get larger and the waterjets more powerful as new technologies are developed and existing ones improved. Throughout all these years, however, the aim has remained the same – to provide the power required while ensuring reliability, safety, and passenger comfort. For Wärtsilä, the technical challenge is to balance the built-in strength needed to withstand the propulsive stresses imposed, with the light weight that is essential for top performance and fuel efficiency.

The fact that Incat and Wärtsilä continue to work together in close cooperation after all these years is clear evidence that both partners have complete trust in each other’s skills and experience. As Tim Burnell, CEO at Incat explains: “The long and successful relationship between our two companie§     s has resulted in what can only be described as a winning team. Our designs plus the integration of Wärtsilä’s modular jets together deliver superior solutions for our customers, as evidenced by three successive Hales Trophy awards.”

Wärtsilä’s Waterjets Director Sander van Oosterhout concurs. “The relationship has become far deeper than just that of a supplier / shipbuilder partnership. We work in close cooperation with Incat Tasmania and customers from the early stages. This close working relationship between engineering and design teams means we are able to design to order and integrate seamlessly with the vessel during the build. And when it comes to commissioning and sea trials, this close relationship ensures things run smoothly for all involved ensuring the best possible end result”

The latest development in Wärtsilä’s ongoing and continuous improvement of its waterjet solutions is the WXJ series. This development is based on a new axial pump design, which boosts performance to give an increased thrust of as much as three percent over the earlier LJX series. At the same time, improved cavitation margins help reduce the environmental impact by lowering noise levels. Wärtsilä waterjet sizes are designed and proven for an extensive range in engine power, from 500 kW up to 33.000 kW.

“Our Smart Marine approach to product design emphasizes high efficiency, safety, and environmental performance,” says Leendert Muilwijk, GM Wärtsilä waterjets engineering. “The WXJ series of waterjets is a prime example of this approach, and while we have kept the small transom interface dimensions and best-in-class weight from the LJX series, we have further developed and improved the overall performance. This why we are the market leader in the large waterjet segment.”

While the success of the Incat and Wärtsilä cooperation can be measured by three successive Hales Trophy awards, speed barriers continue to be broken. In 2012, Incat’s 99 metre catamaran, the ‘Francisco’, operating between Uruguay and Argentina for ferry operator Buquebus, became the world’s fastest largest Ro-Ro ferry when it crossed the River Plate at an astonishing speed of 58.1 knots (107.6 km/h). A winning team indeed!