What happens when you put a 21-year-old, a 30-year-old and a 41-year-old together on ice and tell them to score? Goals. That’s what happens.

What happens when you put a 21-year-old, a 30-year-old and a 41-year-old together on ice and tell them to score? Goals. That’s what happens.

Especially when it is Johanna Kemppainen, Fanny Jalonen and Karoliina “Karo” Rantamäki we are talking about. Despite having been born pretty much 10 years apart, the trio forms the first line of HIFK’s ladies’ team known as Stadin Gimmat.

And on ice, age isn’t even a number; what matters is the number on the shirt. Together, Kemppainen (#23), Jalonen (#40) and Rantamäki (#11) complement each other, and the end result is greater than the sum of its parts.

“I’m probably the one building the game a bit to start with. Karo then brings in her confidence and Fanny, her technical skills,” says Kemppainen.

“Johanna is a defensive forward, so she gets the puck moving towards the opponent’s goal, and Karo’s the first one to be there,” she explains. “I try and keep up, take care of the finishing touches and add some artistic perspective.”

Chemistry is either there – or isn’t

Rantamäki points out that the trio has played together only since September. However, in the course of just a few months, they’ve managed to build a line in which players with all levels of experience can learn from each other.

Even so, Jalonen teases Rantamäki for being a legend – and rightfully so. As the most experienced player in the entire team and with various championship trophies on her list of achievements, many people in and out of the team look up to her.

Rantamäki, if anyone, understands the value of co-operation on ice. Throughout her career, she’s been a part of numerous teams and lines, and she knows that chemistry can’t be forced.

“Even if individual players are good, they might not play well together,” she notes. “If they don’t read the game in the same way, practice won’t change it. It would just take a lot of time and wouldn’t be natural.”

In ice hockey, situations come and go in a heartbeat. Thus, it’s incredibly important for members of the line to be able to trust each other, and to an extent, even read each other’s minds a little.

“There’s no time to start thinking and planning on ice,” the trio emphasises. “If you do so, you’ve already missed your chance and the game has moved on.” 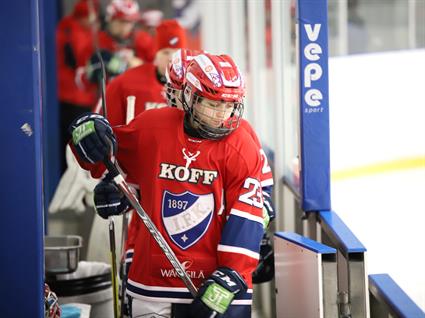 Although the action takes place in the rink, talking about it both before and after can be hugely beneficial both to the players and the entire team. Jalonen remembers Rantamäki from the time she played together with another legend, now retired Petra Vaarakallio.

“No one would want to play against you, as you were so good it was dangerous,” Jalonen tells Rantamäki.

“We had a really good thing going on,” Rantamäki responds. “We were really good friends, but we could also talk about ice hockey for hours and hours. It wasn’t just that we were similar players, we also worked for it and had endless conversations.”

Talking, the three women believe, can really make a difference. Rantamäki accentuates that it’s not enough for the coach to come and tell what and how to do; the players need to discuss between themselves and inspire and encourage each other. Some tips shared by more experienced players, even if it’s just a tiny change in trajectory, can take the team to a whole new level.

And it’s the team that matters.

“An individual player might win a match,” Rantamäki says, “but winning a tournament takes the entire team.”

The winner takes it all

Training with Stadin Gimmat is great fun. Kemppainen, Jalonen and Rantamäki enjoy coming to every practice knowing there’s a team brimming with enthusiasm, ambition, and more importantly, a sense of humour.

“We can be really straightforward with each other, but we also joke around a lot,” says Jalonen.

Initially, Kemppainen was the quieter one, and Jalonen admits wondering if her new teammate would ever open her mouth.

“Slowly but surely she’s warmed up to us,” she reveals laughingly.

Different personalities are just as important to the team as different strengths and skills in the game.

“It adds perspective and more varying points of view to the team,” Kemppainen explains.

Winning, the trio believes, is much more fun with a team around; and having friends around makes losing more bearable as well. Everyone in the team understands that mistakes can happen, and if someone drops the ball – or in this case, puck – momentarily, there’s usually someone else to pick up the slack.

“There’s no blame game,” all the three agree.

“Failing at times is just part of the game.”

Eventually, the first line of Stadin Gimmat wants to be so unstoppable that opponents are of scared them. Rantamäki believes this boosts confidence and even adds a little spice to the game. This can lead to goals, and in the end, winning.

“The ones who say winning isn’t important have probably never won anything,” Jalonen notes. “No one gets out there wanting to lose.” 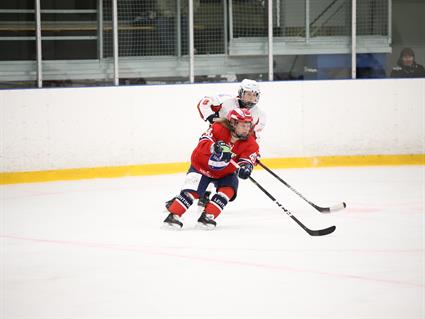