Project Seabin is now commercial. Its floating rubbish cans - that collect debris from seas – are on sale. We caught up with Pete Ceglinski, CEO of the project, to talk about how they navigated choppy waters to get here and what lies ahead.

Project Seabin is now commercial. Its floating rubbish cans - that collect debris from seas – are on sale. We caught up with Pete Ceglinski, CEO of the project, to talk about how they navigated choppy waters to get here and what lies ahead.

A lot happened in 2017 to the Seabin story. The year kicked off with a financial crunch. The crowdfunding money for the floating trash can - an invention that aims to collect litter from water in marinas, docks, commercial ports and yacht clubs - was running out. Then came May, a month that changed everything.

Seabin was chosen, along with nine other start-ups, from 790 applicants to participate in Booking.com’s Booster programme. The three-week intensive course made all the difference. “We learned a lot about ourselves and about our business. We found out that our weakest point was our team,” recalls Pete Ceglinski, Co-Founder and CEO of the Seabin project, who attended the course with the project’s Operations Manager Sascha Chapman.

“We had a manufacturer, a product, and a growing demand. But how we would operate and scale up to meet the demand was our weak link,” he explains.

Luckily the three-week period helped them identify their biggest problem and find a solution. By the end of the course Ceglinski and Chapman pitched their project to Booking.com.

“We ended up getting the second highest funding which was EUR 350 K and we also got a people’s choice award which was EUR 10 K. That really changed the whole game for us! We immediately decided to invest the money in scaling up the team,” says Ceglinski.

The result? The team now comprises people with digital marketing, and financial backgrounds, and also a science intern.

Catch of the day: cowboy boot and pineapples

Additionally, the project is collaborating with marine scientists. Every Thursday, these scientists take water samples and collect nanoparticles and microfibers from Port Adriano in the city of Mallorca where Seabin’s headquarters is located. The same has happened in five other countries for a three-month period.

“We have a lot of statistics and facts on what Seabins are catching around the world,” says Ceglinski.

The most caught item has been cigarette butts, followed by plastic particles and food wrappers. But, there are differences in the catch across countries. For instance, a Seabin in Port Adriano has caught 300–500 grams of debris per day while a Seabin in San Diego caught five–six kilos of debris.

What’s been the weirdest catch, though? “The Seabin in San Diego caught a cowboy boot and few pineapples one day,” says Ceglinski with a laugh.

The team is getting experimental now. It has been trialling oil pads, as well. “After all, Seabin is such a great application to get floating oil from the marinas,” says Ceglinski. The initial results have been good: the pads have been collecting oil. Unfortunately, the oil pads started deteriorating and the team and a supplier are working on ways to overcome the situation. 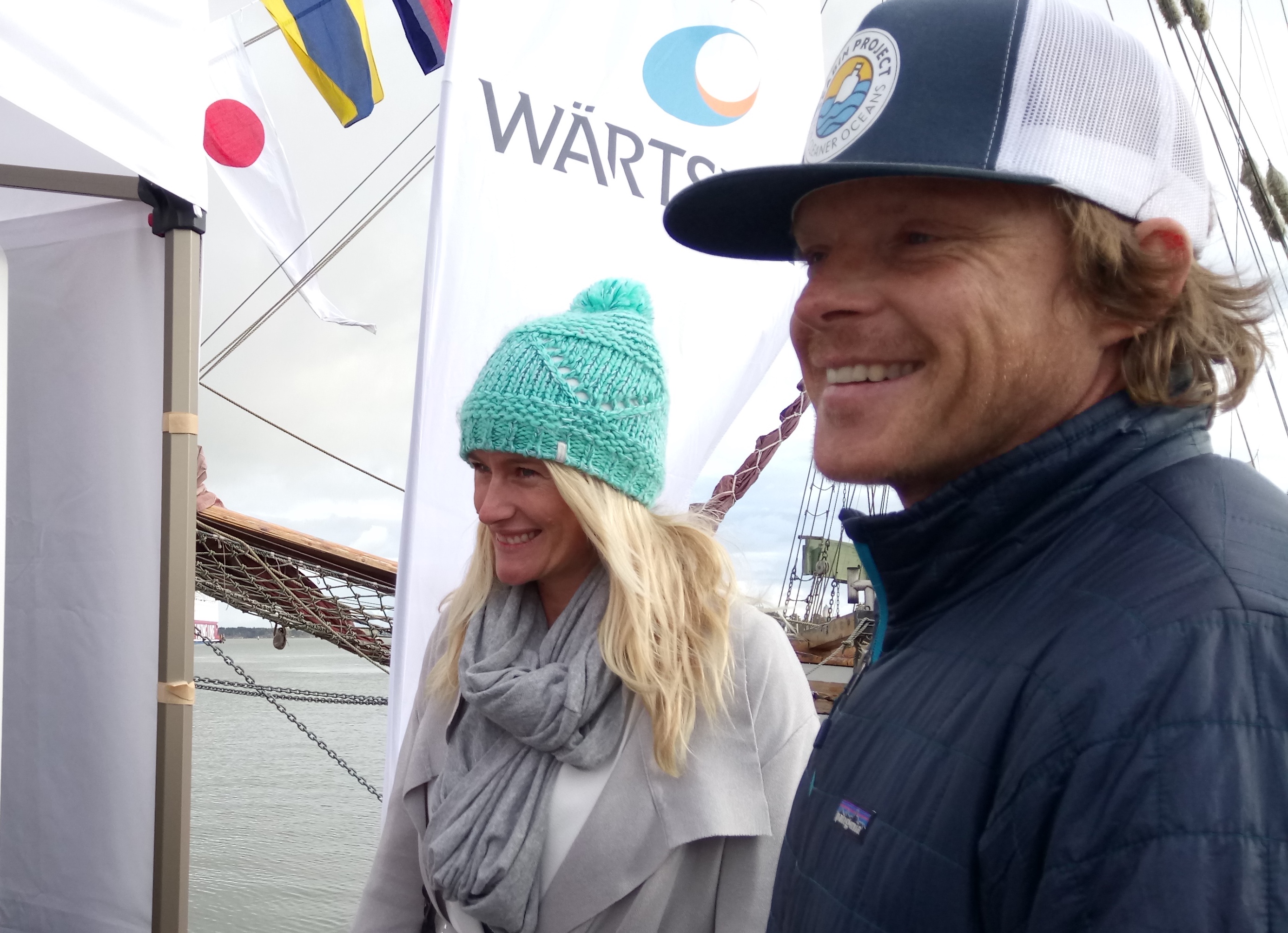 So, while great things happened this year, there are even more exciting things coming up.

“We will have 500 units open for the public. We are extremely excited about this!” says Ceglinski.

“Wärtsilä got 25 Seabins for 20 countries around the world and we will have a big internal roll out in December.”

Wärtsilä was the first corporate partner of the Seabin project. When Pete found out about the big efforts of this “gentle giant”, as he calls Wärtsilä, to make shipping and energy industries more sustainable he was “blown away and so impressed.” He still is.

“We feel very fortunate because there are a lot of technologies existing in the future that Wärtsilä will be using and we know that we can also apply similar concepts to the Seabins to make them more efficient. There are huge dynamics in this partnership.”

The collaboration with Seabin is part of Wärtsilä Corporation’s Finland 100-year centennial programme. So far, Wärtsilä has sponsored three Seabins: one has been installed in Helsinki, another in Turku and the third in Vaasa. “It’s a very noble and generous gift and we are extremely proud to have Wärtsilä with us and to be part of Finland 100.”

“One of the main initiatives for us and Wärtsilä is that we’d like to have more projects where we can involve school children and scientific research as well as the technology side of things. We are investing in the future generations.”

The floating trash bin interests many people. The Seabin project has over 120 K followers on Facebook and over 10 K followers on Instagram. “Many people are concerned for the environment and their health. They are interested in Seabin because the whole action of the Seabin is to get the plastics out of the water,” Ceglinski explains and continues: “We’re not only concentrating on technology but we’re also implementing educational and scientific side of things. We are addressing this as a whole solution.”

The philosophy behind the project is simple: “If we can involve children and school kids in this we can really change the culture and way of thinking so that the future generation will make an impact by stopping consumerism and recycle more.” And no, Ceglinski doesn’t think plastic is a problem but we, the end-users are. “We wouldn’t be doing anything if we didn’t have plastic. It’s just impossible to ban plastics in today’s world.” What really matters, is what we do with plastic.

“We’d like to have a system in place where we can reuse all the plastics that is being collected to make Seabins. If we can’t make Seabins we’d like to make pens, sunglasses or t-shirts. Wärtsilä has already some great initiatives where they are reusing plastics so that is what we’d like to discuss in our long-term projects.”

Seabin is going places. They are going to be installed in Cayman Islands, Bermuda, and in cities like Halifax, Alicante, Amsterdam and Ventura. There are already many ideas for the next products and by the end of this year European Seabin foundation should be operational. “Everything is coming together,” Ceglinski sums up.