Company
Home
Insights
A trash can for the seas

A trash can for the seas

Our seas are being consumed by litter. But if we can have a trash bin on land then why can’t we have one in the water? It was this thought that led to the founding of Seabin, a project that is trying to keep our waters litter-free. Find out how it works and what it means for our seas.

This summer, visitors to Uunisaari, a small island close to mainland Helsinki, will spot a round plastic bin bobbing in the water right next to the pier. The device, called a Seabin, is a floating rubbish can that collects plastics and other unwanted materials from the water.

“Plastic is such an amazing thing but we’ve now come to a point when we realise, ‘Oh my god, what have we done? We have polluted our oceans with plastics’” says Pete Ceglinski, CEO & Co-Founder of Seabin project.

Ceglinski, an avid surfer, witnessed first-hand how trash was taking over the seas.

“It’s time to fix the littering problem,” he asserts, as he leans over the railing on the pier in Uunisaari to look at the newly-installed bin that slowly bobs and sucks in trash from the water.

But Ceglinski wasn’t always this concerned about the environment. “I was a product designer and a boat builder. I wasn’t helping people or helping the environment. In the back of my head, I was always wanting to be a part of some kind of a movement. Then my business partner Andrew Turton told me about this idea. It was something I had always been waiting for.”

Seabin is a simple and feasible solution to clean the seas. But installing Seabins in marinas is only the first step. The Australian duo have bigger plans in store. 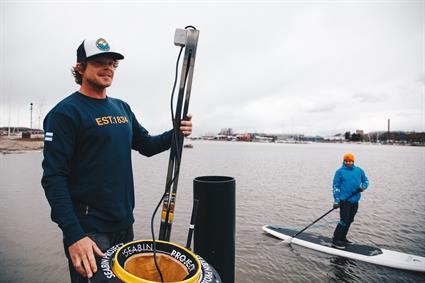 In Ceglinski’s vision, the plastics collected from the Seabins will be reused – think t-shirts, baseball caps and sunglasses. Perhaps the next generation of Seabins will be made of plastics gathered by the bins. One option would also be to  make fuel using the material.

This is where association with companies like Wärtsilä weigh in more heavily.

Wärtsilä is Seabin Project’s global pilot partner for the next three years. The company has donated the bin in Uunisaari and another bin, to be installed in June, to the city of Helsinki and the port of Helsinki, which will operate and maintain the bin. Wärtsilä is also planning to install four more bins in big port towns in Finland.

“We thought it would be great to have some smart people working with us”, says Ceglinski with a smirk as he talks about the collaboration with Wärtsilä.

While the initial phase aims to collect information from the partners on the specifics of trash collected in the bins - how much trash gets accumulated over what period of time, what kinds of plastics make up the trash, what other materials wash up, etc. – going forward there’s scope to improve the product and spread the knowledge. Partners like Wärtsilä will invite schools and groups to visit the bin and make their own projects.

“There are a lot of people with great ideas who don’t have the resources, and there are these large companies that can help. It’s like the bigger brother helping out the little brother.”

Ceglinski believes that the future will see a lot more collaborations with small groups and large corporations alike. 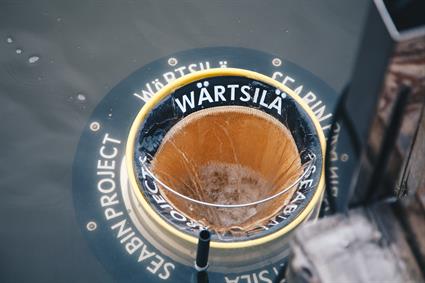 We all play a part

Starting this summer, Seabins will also be for sale. Ceglinski hopes that in the coming years, marinas around the world will have floating trash cans to keep the unwanted elements out of the water. However, he believes the bins themselves are not the final solution. People, in general, have a role to play in keeping our waters clean.

He is of the opinion that people should take action, even if it means picking up a plastic bottle when going to the beach or opting for non-packaged foods at the grocery store. Every small effort matters.

“It all comes down to changing our ways of thinking,” says Ceglinski. He takes one last look at the bobbing bin in Uunisaari and spots something.

“Look at that cigarette butt going in!” he says with excitement. The seas’ trash bin is at work.