Next port of call – the methanol bunkering station?

Clean burning, cheap to produce, widely available and with the potential to be 100% renewable – methanol checks plenty of boxes for the shipping industry as it wrestles with the increasingly pressing need to decarbonise. While making the switch means some changes onboard, conversion is a viable option, as the Stena Germanica ro-pax ferry – successfully running on methanol for the last six years – has proved.

Clean burning, cheap to produce, widely available and with the potential to be 100% renewable – methanol checks plenty of boxes for the shipping industry as it wrestles with the increasingly pressing need to decarbonise. While making the switch means some changes onboard, conversion is a viable option, as the Stena Germanica ro-pax ferry – successfully running on methanol for the last six years – has proved.

As we all know, the maritime industry is taking a hard look at what it’s putting in its tanks today and what it might be fuelling up on in the future to cut greenhouse gas and other emissions. The pressure is coming from all sides. Cargo owners are looking to vessel operators to help them decarbonise their supply chains; investors and financial institutions are placing increasing weight on sustainability in their decision-making processes; employees are attracted by the prospect of working for a sustainable company; and modern consumers expect corporate entities to act responsibly.

“One of the emerging alternative routes to decarbonised operations in the form of cleaner, greener future fuels is methanol. This easily and cheaply produced industrial alcohol has plenty of promise as a viable fuel for virtually any type of marine vessel.

“Methanol’s physical and chemical properties are ideal for combustion engines and it has excellent ignition properties,” explains Toni Stojcevski, General Manager, Sales, Project Services at Wärtsilä. “It’s one of the best alternative fuels to meet current and future emissions targets in terms of NOx, SOX and particulates. There’s a readily available global supply with over 98 million metric tons produced every year, 80% of which is already transported by ships, and production is easily scalable to meet future demands.”

A known quantity with carbon-neutral potential

Methanol has been shipped, handled and used in industrial applications for over a century; as an added bonus it presents a low risk to the environment because it dissolves in water and biodegrades rapidly. “In terms of infrastructure, because methanol is used so widely, storage and handling facilities already exist at most major ports, and since it is liquid at atmospheric pressure, existing fuel storage and transfer facilities only require minor modification in order to be able to handle it,” Stojcevski highlights.

What’s involved in making the switch?

Just like any other fuel conversion project, when considering adapting a vessel to run on methanol there are several factors to consider in the planning and design phases. “In a feasibility study we take a holistic approach that considers every aspect – the engines, piping, bunkering tanks, pumps, safety systems and so on – to ensure the best possible outcome,” says Francesco Campagnolo, Senior Product Manager, Wärtsilä.

Methanol conversion is a viable option for both main and, on larger vessels, auxiliary engines. “Space is needed for the additional storage tanks to hold the methanol fuel. A new, parallel fuel line connecting the bunkering tanks to the engine is also needed. “We take all these aspects into account during the design phase,” Campagnolo says.

“Methanol will not harm the ocean if there’s a spillage, meaning it can be stored in single-walled tanks. This means that valuable cargo storage space is saved because it’s possible to use existing void spaces or ballast tanks for methanol storage, for example. It is however important to remember that methanol is very different from HFO. It’s a low-flashpoint fuel so robust safety systems and procedures, particularly with regards to fire risks, as well as comprehensive training for crews are at the core of any conversion project,” Campagnolo continues. “The properties of methanol mean that particular attention has to be paid to the fuel injection system and ensuring that seals are properly designed to prevent leaks.”

In terms of the practicalities of performing the conversion, on vessels with multiple engines off-hire can be minimised by performing the engine conversion while the vessel is sailing, while installing new fuel tanks and bunkering lines might take a vessel out of action for a few weeks. 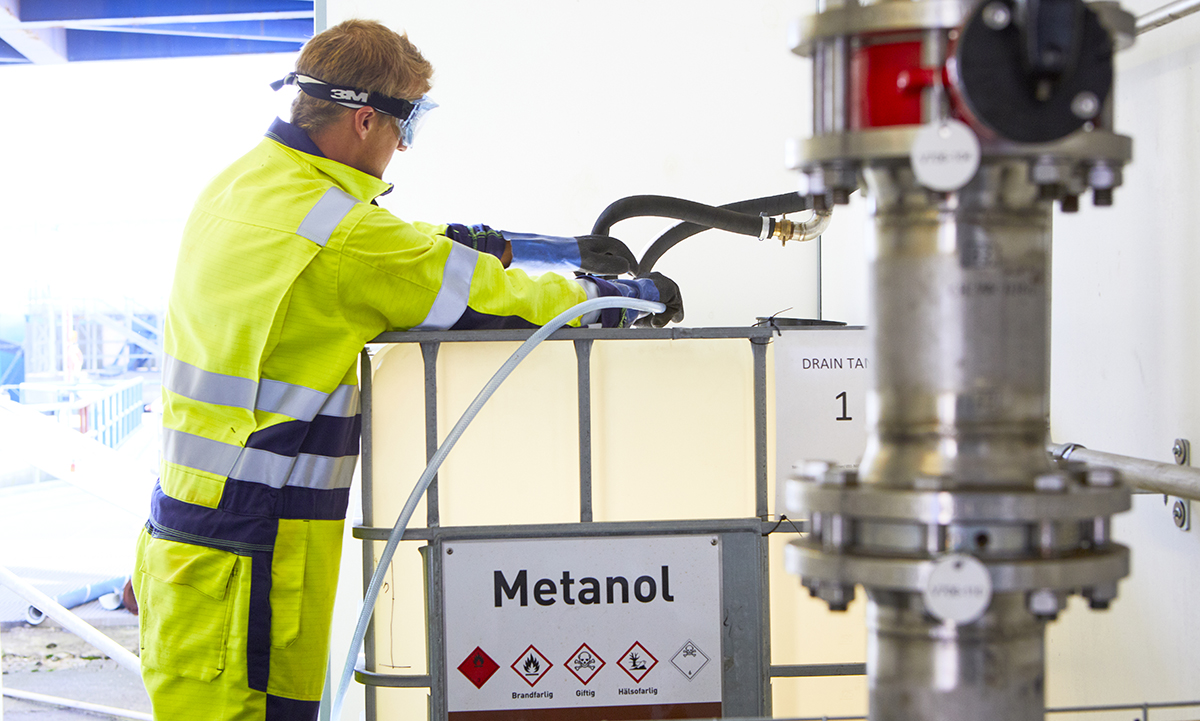 In early 2015 a co-development project between Wärtsilä, Stena Line, the Port of Gothenburg and the Port of Kiel, supported by Methanex Corporation, culminated in the world’s first vessel to run on methanol: the 240-metre-long, 24 MW ro-pax ferry Stena Germanica. The vessel’s Wärtsilä ZA40S 4-stroke engine was converted onboard to a fuel-flexible setup that enables it to run on methanol or traditional marine fuels. Stena Germanica began the world’s first methanol-powered sailings between Gothenburg, Sweden and Kiel, Germany in late March 2015. The conversion work was performed at Remontowa Shipyard in Poland.

“The Stena Germanica is an excellent example of Wärtsilä’s ability to bring to market innovative systems that increase efficiency and support environmental sustainability,” says Stojcevski. “The vessel has now clocked up six years of continuous commercial operation without any problems related to the use of methanol as a fuel. Importantly, switching to methanol has cut the Stena Germanica’s NOX emissions by 60%, SOX emissions by 99% and particulate emissions by 90%. When running on methanol alone the engines operate 55% below the IMO Tier II l NOx limit, and with methanol in general Tier III can potentially be achieved with no need for exhaust-gas treatment.”

“Being the owner of the world’s first ship to use methanol as a fuel represented a great step on our journey to become a leader in sustainable shipping, and is an achievement we are very pleased to share as we mark the six-year anniversary of Stena Germanica’s successful operation on methanol.

The project represented an important milestone for Wärtsilä in its quest to develop high-quality, reliable technologies that are helping to make a sustainable future for shipping a reality. “Our dedicated team has supported the customer from day one, and we are continuously gathering valuable data from the vessel to help fine-tune and improve its performance,” says Campagnolo. “The collaboration between all the partners involved has been seamless, and we have learned many valuable lessons from each other along the way. The vast amount of knowledge and experience we have gained from this project will be invaluable as we continue to develop systems and solutions that will support the wider adoption of methanol as a marine fuel,” concludes Stojcevski.