MS Megastar – pride of the Baltic

The MS Megastar, which recently entered service on the Baltic ferry route between the Finnish and Estonian capitals of Helsinki and Tallinn, features cutting edge Wärtsilä technology – and the Baltic’s biggest shopping mall.

The MS Megastar, which recently entered service on the Baltic ferry route between the Finnish and Estonian capitals of Helsinki and Tallinn, features cutting edge Wärtsilä technology – and the Baltic’s biggest shopping mall.

For many Helsinki visitors and residents, one of the most memorable and anticipated experiences is a cruise on one of the enormous ferries plying the Baltic routes to Tallinn and Stockholm. It’s almost a summer or pre-Christmas ritual for Finns to take the two-hour voyage to Tallinn, the capital of Finland’s Baltic cousin, Estonia, and to enjoy the shopping and entertainment on offer. It’s on the itinerary of many overseas tourists to do the same.

For the operators of these ships, the business is fiercely competitive. It’s important to offer the fastest, most comfortable and environmentally sustainable vessels to an increasingly discerning public. This was the background to the launch in late 2016 from the Meyer Turku Oy shipyard in southwest Finland of the MS Megastar, a fast ‘ro-pax’ (roll-on, roll-off passenger) ship.

The ship was ordered by AS Tallink Grupp for its Helsinki – Tallinn route, which carries well over eight million passengers annually, and entered into service in January 2017. Powered by Wärtsilä 50DF dual-fuel engines that run mostly on liquefied natural gas (LNG) and steered with the support of Wärtsilä navigation systems, the Megastar is one of the most modern, state-of-the-art vessels currently traversing the Baltic.

“I was involved in devising a major part of the nautical bridge equipment for this vessel,” says Alexander Vehrenkamp, Sales Manager, Systems & Solutions at Wärtsilä Electrical and Automation. “More specifically, I designed the navigation system including radar, navigational sensor, compass system and radio equipment.”

Alexander gives credit to the long and mutually trusting relationship between Wärtsilä and the shipyard. “Our work was done in close cooperation with Meyer Turku. The building specification for such a vessel is usually developed within a close triangular relationship between owner, ship designers and shipyard.” 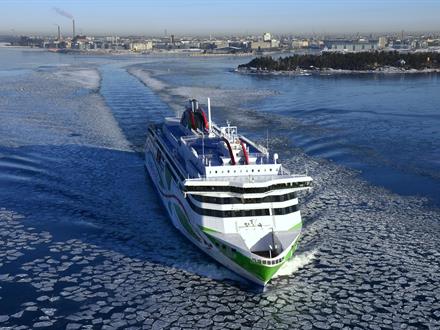 The Wärtsilä Electrical and Automation (E&A) sales team communicates with all stakeholders continuously, he continues, to give input about the latest available technology and to ensure the best position for systems and solutions as early as possible in the project. “This comprehensive approach, which might include activities from several entities within the group, is the key to success.”

The supplier for bridge equipment in a shipbuilding project is usually chosen at a later stage than, for example, the engines, since it has less influence on overall ship design and construction. “Just the same, we were in close contact with the owners in order to strengthen confidence in our systems. In the later stages of the sales process, I was in close discussions with the shipyard about optimising our scope of supply to cut costs, while being fully compliant with the building specification.”

Megastar is the first vessel in the Tallink fleet to carry the Nacos Platinum Integrated Bridge System, which simplifies and streamlines controls and monitoring on the bridge of a ship.

The ‘Platinum’ tag denotes the sixth generation of Nacos systems, which has its roots in requirements started by Finnish ferry operators, decades ago. “This heritage, in combination with constant innovation, is the reason why Nacos Platinum is often the first choice when it comes to complex navigational tasks. This mix of experience and innovation explains why we have, by far, the largest global market share in cruise ship and ferry navigation.”

Meanwhile, the use of natural gas as fuel significantly cuts noise and exhaust emissions. Compared to traditional diesel or heavy fuel engines, dual-fuel (DF) engines, such as those provided by Wärtsilä for Megastar, reduce carbon dioxide emissions by 25%, nitrogen oxides by 85% and sulphur dioxide and particulates almost entirely.

“The vessel has ‘traditional’ shaft lines and propellers provided by Wärtsilä,” says Mika Ojutkangas, General Manager, Wärtsilä Marine Solutions. “The vessel operates at a very high speed, but we have managed to provide propellers with record-breaking efficiency. The ice class makes this efficiency an even bigger achievement since this usually presents a challenge.” This is because thicker and stronger materials are needed for tackling the Baltic’s potential winter ice conditions.

Tallink is at the vanguard of progress towards cleaner shipping in the Baltic Sea, says Ojutkangas. “It is now clear that new large passenger vessels in the area will be powered with LNG instead of marine diesel. They have very low emissions and very high efficiency. There are over 200 vessels powered with our DF engines operating across the world. In the conservative marine market, all new things take time, but now we clearly see a change towards natural gas as a fuel.”

The Megastar is the first new ship in the Tallink fleet since the MS Star entered service eight years ago, and early feedback from both crew and passengers has been enthusiastic. Wärtsilä has signed a five-year maintenance agreement with AS Tallink Grupp for the Megastar. The agreement covers maintenance and optimisation of the ship’s engines, as well as the supply of spare parts and round-the-clock online support. With continuous monitoring and Wärtsilä Condition Based Maintenance service of the engines, the passengers can enjoy their voyage without any unexpected interruptions. For Tallink, predictability of the maintenance costs helps optimise operations.

The ship measures 212.2 metres from stern to bow, has a service speed of 27 knots, and can carry up to 2,800 passengers, who can delight in the shopping opportunities of the Traveller Superstore – the biggest mall on the Baltic.

Passengers might not be aware that they are guests on a ship that features, for example, Nacos Platinum navigation systems, says Alexander Vehrenkamp. But they can rest assured that the vessel is being guided by the most reliable navigation system available, using the most fuel-efficient engines with the lowest emissions on the Baltic.