A partnership between divers, authorities and companies is studying human impact on the marine environment.

On a windy night in December 1944, five German warships set out to lay a minefield in the Gulf of Finland. The squadron mis-navigated in a snowstorm, and two destroyers hit their own previously laid mines. Both sank in only a few minutes. Today, one of those warships is once again a threat, but this time because she might be leaking fuel. A team of amateur divers plan to help authorities keep an eye on the Z-36 and other wrecks like her.

The Baltic Sea is considered one of the world’s most polluted. It is connected to the North Sea by only narrow straits so circulation with the Atlantic is limited. Analysis by the Helsinki Commission identified seven major threats: eutrophication, hazardous substances, marine litter, underwater sound, non-indigenous species, overfishing and seabed loss. The last thing the marine environment needs is fuel oil leaking from old wrecks.

The fuel used decades ago had a much higher sulphur content than the fuel ships use today, and in World War II Germany used synthetic oil produced from coal which was even worse. The Z-36 had a capacity of about 835 tonnes of fuel oil, and as the ship slowly decays there is a risk that fuel will be released.

“It has been estimated that the fuel oil in sunken ships around the world is more than what was released during the Deep Water Horizon disaster in the Gulf of Mexico,” says diver Mauro Sacchi, who in his day job is Director for Business Development at Wärtsilä. 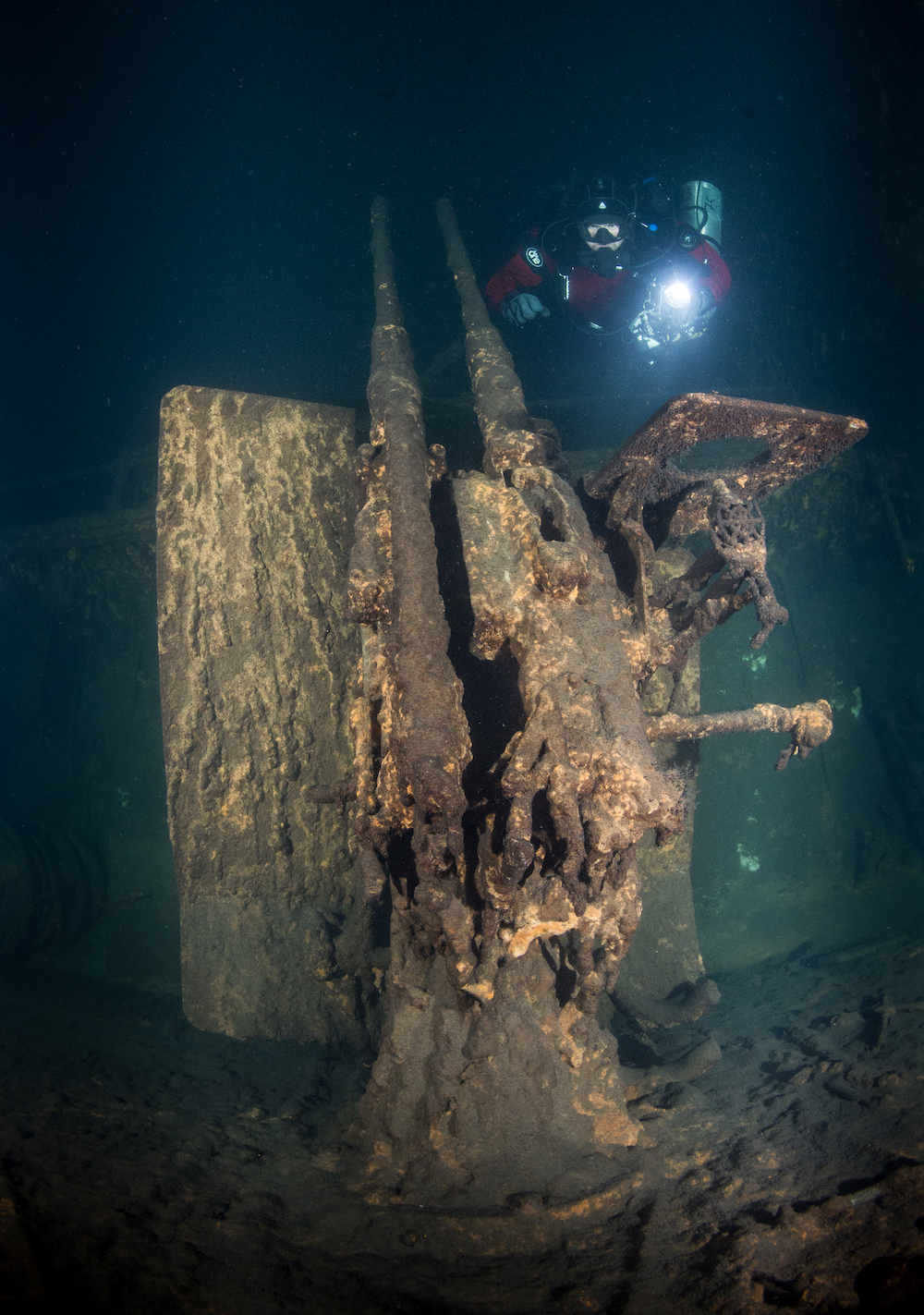 The Finnish Environment Institute SYKE has been concerned about fuel leaking from sunken ships for some time. In the autumn of 2019, they sent the research vessel Aranda to study two wrecks in the Åland archipelago between Finland and Sweden. Where feasible, the plan is to cut holes in the hulls and remove the remaining fuel oil. But the first step is to gather information: where are the sunken ships and which ones are leaking oil? Gathering such detailed information with limited resources is a difficult task. To solve the challenge a partnership has evolved between authorities, diving groups and companies.

“There are hundreds of sunken vessels at risk of leakage, but the authorities can’t monitor them all alone,” marine scientist Juha Flinkman explains. They asked the diving community for help and to report back what they discovered. “We wanted to develop a simple survey method that non-professional divers can perform: a visual survey including photogrammetry of the wreck, soil samples and the placement of sensors. Our goal is to test drive it with the Z-36 wreck as a start.”

One key partner in the project is the diving group Badewanne. They document shipwrecks in the Gulf of Finland and had a plan to expand their operations to more actively embrace the environmental aspects of shipwrecks. When SYKE expressed their concern about leaking oil the idea evolved to place hydrocarbon sensors on the wrecks, because leaking oil is often invisible to the naked eye.

Wärtsilä too has volunteered to help for this stage of the endeavour, as preserving the marine environment is central to their corporate mission. Since 2014, employees have volunteered in Project AWARE activities to clean up marine debris around the world, both above and below water. More recently, a group of Wärtsilians began setting up sensor stations to collect important underwater data documenting changes to these sensitive environments under the umbrella of Project Baseline.

“We’re concerned citizens and employees, not marine biologists. We have the passion but need direction from specialists,” explains Sacchi.

“The Baltic is rough, cold and dark, and some of the wrecks might be 50-100 metres deep. We had to start by training in an easier environment,” he says.

Flinkman has a major role in the initial training. A marine scientist and a development manager for research vessels at SYKE, he's been a key member of Badewanne for over two decades. Under his guidance, the Project Baseline team began working in calmer inland waters in Finland to gain the skills and experience necessary to tackle the tougher challenge of Baltic wrecks.

“We needed to train to dive as a team and develop methods for safely deploying the sensors in cold water,” says Mikko Gustafsson, Chief Project Engineer at Wärtsilä. “We needed to understand how to configure the sensors, install them and read the data safely before we move on to the harsher environment of the Baltic.”

In 2019 the divers began at a test site in Kaatiala, Finland. They placed three visibility boards for photos and two sensors at modest depths to record temperature and luminosity. Data was collected between May 2019 and March 2020 and sensors were reinstalled to test the life of the batteries. The experiment was a success; the sensors worked even better than expected, and the team refined the techniques needed to install them and retrieve the data.

“You deploy an array of sensors based on the questions you want to answer,” Gustafsson says. “We worked with SYKE to design a station suited to the task. This approach culminated with our first fully fledged station at Ojamo.”

The second inland site, Ojamo quarry, is just 60 kilometres from Helsinki. It was a calcite mine until the 1960s, and since then has filled with groundwater. It is one of the most popular diving sites in Finland, for professionals as well as amateurs. 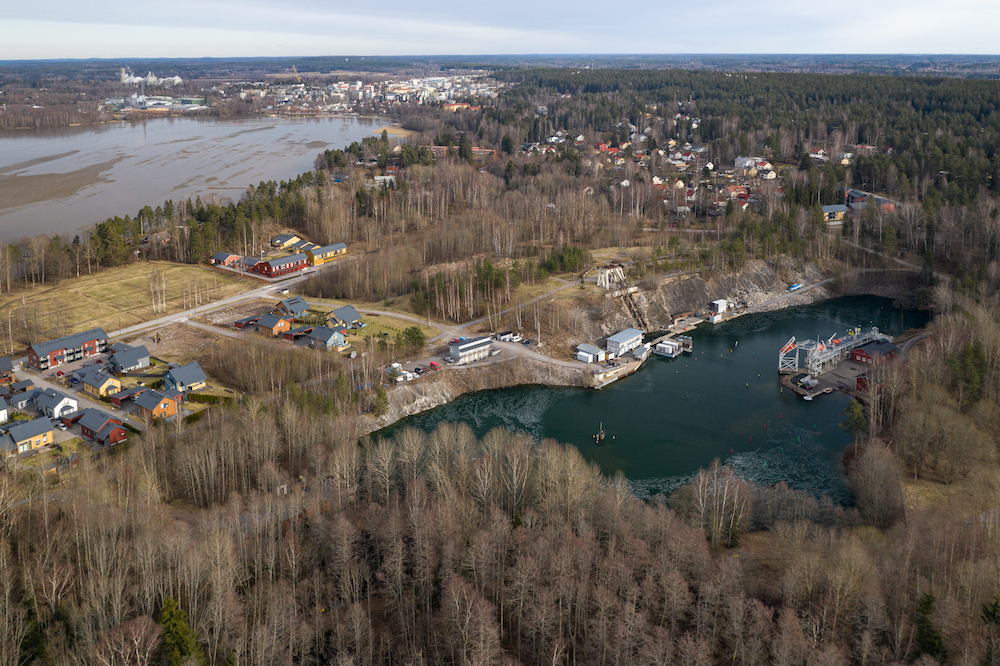 Ojamo quarry, a world-class mine diving destination is the perfect environment for practicing these kinds of dives. / Photo by Andrei Voinigescu

“The quarry is used by Luksia, a school for commercial divers, as well as Meriturva, a maritime safety training centre,” says Andrei Voinigescu, General Manager for Business Intelligence at Wärtsilä. “It is not a natural lake and has a lot of human activity, which makes it particularly interesting for us.”

The overall aim is to understand how humans impact the underwater environment, which made the Ojamo quarry perfect for a second deployment. If the team noticed a change in the data, they could consult with the other users of the site to link the change with specific human activity. They began deploying sensors at progressively greater depths and returning at regular intervals to retrieve the data.

“In two-and-a-half months we collected 33,000 data points, and we noticed interesting changes,” Voinigescu explains. “On 6 January the pH and dissolved oxygen levels began to change. Why? Was it some natural process, maybe changes due to the weather, or was it because of human activity, such as people practising underwater construction in the lake? Right now, we think there are clear connections between human activity and biological impact.”

At Ojamo, the divers also wanted to explore the “winter kill” phenomenon common in northern lakes. During winter, ice cover and snowfall stops oxygen dissolving into the water from the atmosphere while decaying organic matter uses up the existing oxygen. Fish suffocate and die due to lack of oxygen. With climate change causing milder winters, it is possible that “winter kills” will happen less frequently or be less severe, but scientists need hard data to be sure.

The Project Baseline team is happy to share the data with anyone who can use it. Luksia, the commercial diving school, is studying the data to understand how their construction activities impact the water environment where they practice. The nearby City of Lohja was also interested because groundwater drawn near Ojamo supplies the neighbouring community. The sensors in the quarry could be an additional data-point for their own water-quality monitoring. 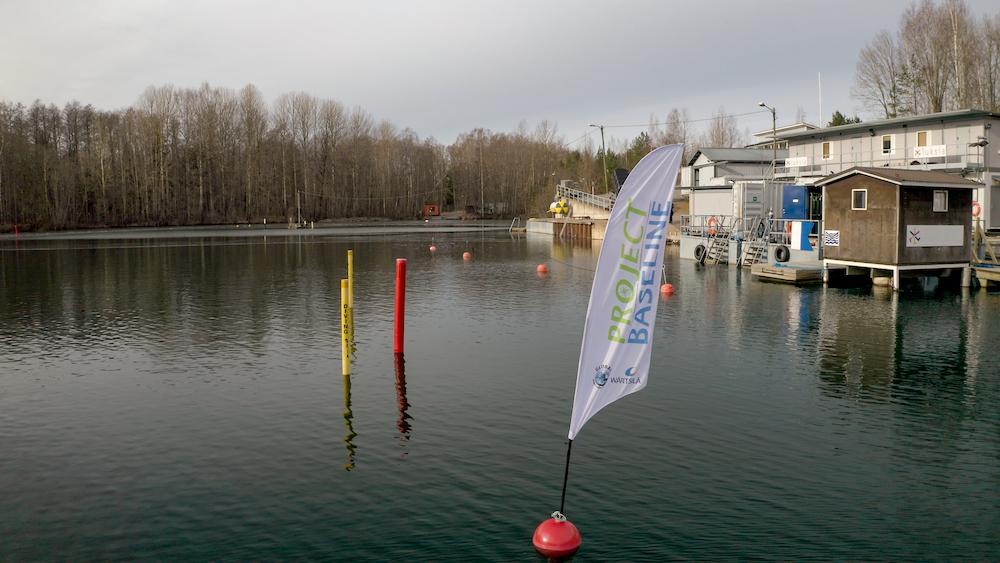 The Ojamo site is an important training environment for the Project Baseline volunteers. The quarry is deep, making it a good simulation for some of the conditions and decompression obligations they will face in the Baltic when they place sensors on sunken wrecks.

Natural cave diving is not possible in Finland, but the Ojamo site has old, flooded mining tunnels. The team can practice overhead environment diving skills in the tunnels, essential preparation to work in the confined spaces, poor visibility and great depths where the Baltic wrecks reside.

“For 2020, the plan is to go deeper and install more sensors in the tunnels,” says Voinigescu. “We want to monitor changes in dissolved oxygen and pH level from the ground water. This will provide a good comparison point to the readings from the open water pit, where rainfall and human activity have a more direct impact.”

“All the Wärtsilä volunteers completed Global Underwater Explorers (GUE) fundamentals training to safely and effectively operate as a team underwater,” Sacchi says. “We did the GUE Tech 1 course for managing greater depths and GUE Cave 1 course for managing line operations and poor visibility conditions. The environment is very challenging. Communicating underwater is challenging. Having every team member on the same page in terms of operating procedures is absolutely essential, and that’s what the GUE training ensures.”

The next step will be training on closed-circuit rebreather diving, which will be necessary for the Baltic dives.

A number of different private and public partners have joined the endeavour. Onset sensors have been used as water quality data loggers while Valtamer has supplied the group with underwater tablets to collect data. 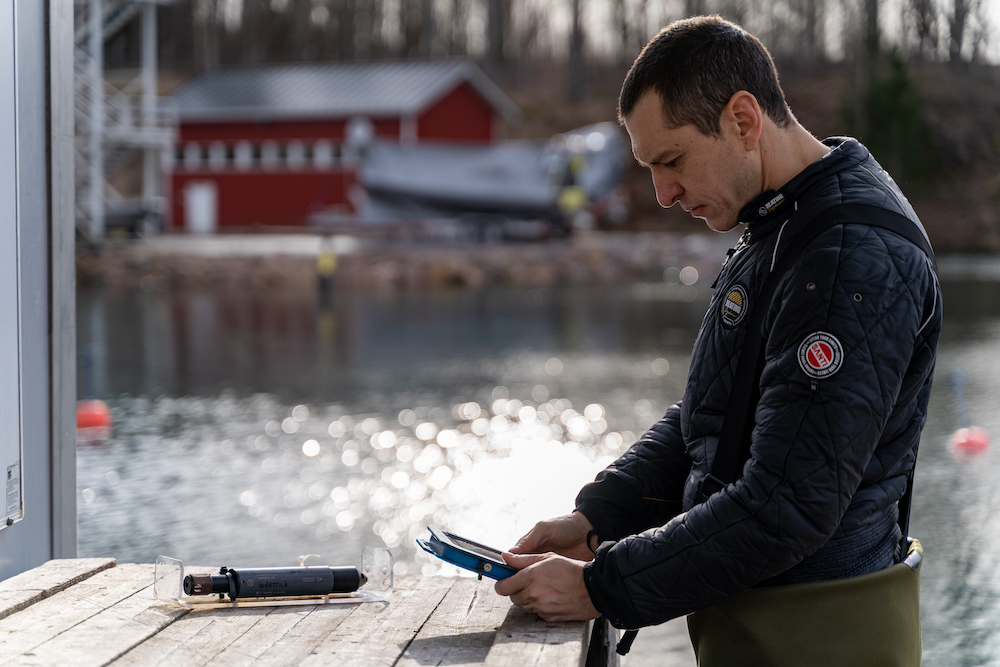 “When you have sensors at 50 or 60 metres in an overhead environment in 4 degree water, you don’t want to be doing multiple dives to remove and replace them every time you need to get the data offloaded,” said Jouni Leinikki, founder of Valtamer and Finnish member of the European Scientific Diving Panel.  “Having a tablet that can wirelessly download the data in-water eliminates a lot of logistical and safety challenges associated with back-to-back technical dives.”

The local diving community at Ojamo has been extremely helpful as well, volunteering to support the Project Baseline team. When they move to the Baltic, the dives will be conducted from the Badewanne expedition vessel.

“All of these partners are critical to conducting these activities in safety and with the right tools,” Sacchi says.

Exorcising the ghosts of WWII

The divers will continue running the Ojamo Project Baseline site, because it has created the right level of interests among many parties and it provides the perfect ground for practicing. But the goal for the entire project is to eventually move to the Baltic. Two missions are planned to visit old warships from WWII, but they are being visited for different reasons.

The M-103 is a Soviet submarine which disappeared in mid-August 1941. It was discovered 57 years later during a NATO minesweeping training exercise and now lies covered with trawling nets on the seafloor.

These “ghost nets” are a worldwide problem. They can entangle fish, birds, marine mammals or even human divers. SYKE collaborates with the Finnish Fishermen’s Association to locate abandoned nets in the Gulf of Bothnia, the large body of water between Finland and Sweden. Badewanne divers have mapped and even already removed some of the nets. With their help, the Wärtsilä Project Baseline team plans to clean the ghost nets off the M-103 wreck.

They’ll also place sensors on the wreck of the German Z-36 destroyer to detect the presence of hydrocarbons and monitor marine conditions. If the old ship is leaking fuel, the authorities can act, but for that, they need reliable data. The volunteer divers are ready to help obtain that data.

“It is important to take this project step by step. We need lots of practice to do this correctly, and we will move on to the next stage only when the team is ready. We are very happy that Wärtsilä is supporting us on this multi-year commitment.”

The goal is to train as a team while deploying boards and sensors.

The goal is to deploy full stations to test human impact on marine environment and to expand dive training.

The goal is to begin monitoring old wrecks and to help clean them where possible.