Royal Caribbean Cruise Lines’ 362-metre Harmony of the Seas, launched last May, not only sets the record as the world’s largest passenger ship, it also sails past most rivals in terms of dazzling experiences and novel amenities offered on board. What can this floating pleasure palace tell us about changing passenger expectations and other key trends in the rapidly evolving cruise industry?

Royal Caribbean Cruise Lines’ 362-metre Harmony of the Seas, launched last May, not only sets the record as the world’s largest passenger ship, it also sails past most rivals in terms of dazzling experiences and novel amenities offered on board. What can this floating pleasure palace tell us about changing passenger expectations and other key trends in the rapidly evolving cruise industry?

A pair of tube slides plunging 10 storeys downwards, a zip line nine decks in the air, two surf simulators, two rock-climbing walls and an ice rink. Harmony of the Seas is definitely not your grandma’s cruise ship.

The list of impressive offerings further extends to, among other things, a 1400-seat theatre for Broadway shows, a waterslide complex, an escape room, a Boardwalk Arcade, a ‘Central Park’ complete with live trees, seven distinct ‘neighbourhoods’ and 20 dining venues.

Naturally, packing in so many flash features requires a lot of space, which goes a long way to explain how this massive ship came into being. Many of today’s passengers – a decidedly more age-diverse group than their counterparts of 15 years ago – are expecting onboard action and adventure between ports of call. The bigger the ship, the more ‘wow’ experiences it can hold.

“Having this kind of volume is really what enabled us to build the ‘neighbourhoods’ and have these offerings throughout the entire ship, from forward to aft, top to bottom,” explains Janne Lietzen, Associate Vice President for New Building at Royal Caribbean Cruise Lines. The super-sizing came with other important advantages, not least of which were economies of scale, ultra-smooth handling and ‘world’s biggest’ bragging rights. But, according to Lietzen, RCCL’s key impetus for building Harmony boils down to one thing: meeting customer expectations. It fits with the company’s long-held strategy of incrementally increasing the ship size to both generate and accommodate an ever-growing thirst for onboard fun.

Harmony is, in fact, the third nearly identically sized ‘Oasis-class’ vessel that the company has launched since 2009. A fourth is due to arrive in spring 2018. Each outdoes the last for headline-grabbing attractions.

“It’s obvious that, with the larger ships and the bigger concepts, you can widen your product offering a lot. That’s how you can feed the expectations that are coming from the guests,” says Lietzen. 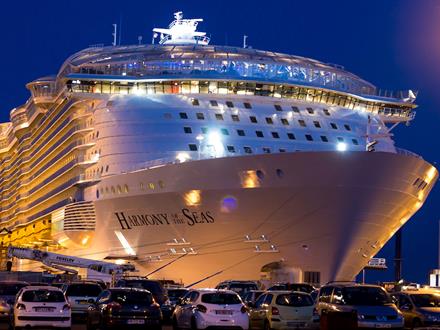 Providing these seemingly over-the-top features might still seem like overkill to outsiders, especially considering the exotic ports of call included in the cruise ticket price. To better understand the dynamic, it’s helpful to look at cruising’s place in the travel market as a whole.

As Fred Danska, Wärtsilä’s Director for Cruise Business, points out, cruise lines are competing directly with land-based vacations like trips to Orlando or New York, but have so far grabbed a relatively tiny market share. “As one of the cruise executives said, it’s one of the best-kept secrets in the vacation world. You get the most bang for your buck when you spend money on a cruise,” he says, referring to the all-inclusive nature of the offer.

To compete more successfully, the cruise lines have constantly been upping their game with new destinations as well as with the onboard thrills and comforts. Evidence shows that their efforts are paying off. Worldwide passenger numbers have shown a strong, steady growth over the past three decades. Cruise Lines International Association (CLIA), the world’s largest cruise industry trade association, expects the figure to hit a record 25.3 million in 2017 – a growth of 21% over the 2012 figure.

Launching large ships like Harmony helps, Danska says, not only because of the attention they generate, but because the market is capacity-driven. Build a ship and travel agents will work deals to make sure every cabin is filled, which also guarantees a secondary revenue stream from onboard spending. 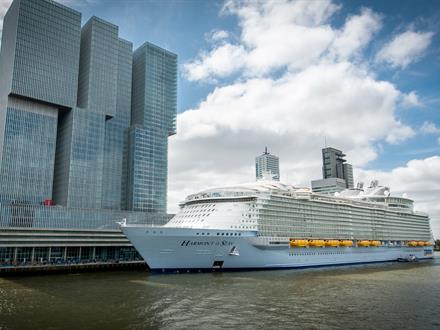 Bells, whistles and beyond

Of course, the strategy of reeling in customers with ever-bolder and more sophisticated forms of onboard entertainment requires constantly dreaming up new concepts and making them workable from a technical standpoint. In Wärtsilä, that task falls to Wärtsilä Funa, the company in Marine Solutions responsible for entertainment systems.

Maik Stoevhase, Director of Automation, Navigation, Communication & Integrated Systems at Marine Solutions Electrical & Automation, says that the creative work is an eternal process. “We never stop looking for innovative solutions on the entertainment side.”

Sometimes Funa will suggest concepts for an up-and-coming vessel. Other times the shipowners themselves will come to Funa with an idea they want turned into reality. “It’s both push and pull,” Stoevhase notes. In either case, he says, it’s critical that Wärtsilä’s design teams work closely with the shipowners’ design teams to bring the ideas to life.

While Wärtsilä Funa’s role in the Harmony of the Seas project itself involved less attention-grabbing systems such as architectural lighting and CCTV, in other builds it has taken centre stage. Funa’s repertoire includes, for instance, a motorised kart track with state-of-the-art sound and control systems for Norwegian Cruise Lines and a unique system of LED balcony lights that allows Genting Dream, Asia’s first luxury cruise ship, to display messages across its sides.

In Harmony, on the other hand, the most impressive Wärtsilä tech supplied is the kind that the passengers will likely never see. This includes Nacos Platinum, a cutting-edge navigation and dynamic positioning system that brings together all the latest functionalities such as intelligent route planning, state-of-the-art human-machine interfaces and more. It’s the favourite among cruise shipowners because it delivers gains in efficiency and scores high in the one area they care about above all else – safety.

There’s a lot more Wärtsilä engineering under Harmony’s hood, including the six main engines that give the ship close to 100 MW of power, four of the world’s most powerful bow thrusters and the world’s largest SOx scrubbers.

Harmony of the Seas is decidedly a product of the trend towards larger, more experience-packed cruise ships, and considering that the industry shows no signs of slowing down, one has to wonder how far the trend can go. Is the future of the industry really going to be mammoth, floating amusement parks?

Not likely, according to both Danska and Lietzen. While the average size of new builds may be getting larger, these experts note that we’re now approaching the upper boundaries of practical ship size given limitations in ports and available dry-docking facilities.

And as Cindy D’Aoust, president and CEO of Cruise Lines International Association (CLIA), points out, there are other trends in the industry that need to be taken into account. “While it is clear that larger ships are often able to offer consumers the latest and greatest features, each traveller is looking for their own unique experience which doesn’t always equate to a larger ship.”

For instance, there’s river cruising, which continues to grow in popularity, as does the luxury cruise market. Younger generations, D’Aoust says, are looking for more authentic experiences which may not equate to crowds, water slides and 3D cinema.

There may soon also be cultural perspectives to consider. While the Caribbean, where Harmony and most other mega-ships roam, is the still world’s most popular cruising destination, the real growth story right now is in the third-place Asia market. Passenger volume there jumped from 775,000 to nearly 2.1 million between 2012 and 2015, according to CLIA data. Only as that market develops further will it become clear how passenger expectations in the region are shaping up.

Only time will tell, of course, what new trends emerge in the industry in coming decades and what new areas of the world come online as enticing new destinations. For those already established now, in any case, the outlook is promising.

“The order book continues to be at all-time high, with 26 new ships (ocean, river, and speciality) in 2017, and an even more impressive 97 new cruise ships expected to be introduced to our industry from 2017 to 2026,” says D’Aoust. “So right now is an extremely exciting time for the cruise industry.”