Company
Home
Insights
DC or not DC, that is the question

DC or not DC, that is the question

What are the advantages and disadvantages of DC hubs? When are they useful and what problems can arise when incorrectly applied?

With the rise of fully electric and hybrid vessels, a new integration concept for powertrains known as the DC hub has emerged. What are its advantages - and what problems can arise when it is incorrectly applied?

Ship owners opting for diesel-electric propulsion today can choose from several different concepts for electrical distribution, ranging from low voltage systems for smaller power ranges like those seen on ferries or bulk carriers to medium voltage for larger power ranges like those on a large container or cruise vessel. What unites these concepts is that the power producer is an engine with a connected generator producing electricity at alternating current (AC).

The rise of the DC hub

Typically, electricity has been distributed to other consumers in AC and converted to direct current (DC) for consumers that need it – usually smaller onboard electrical systems, as opposed to the bigger systems such as electric propulsion that require AC. But as fully electric and hybrid vessels have become increasingly popular, a new electrical integration concept that uses DC for electricity distribution, known as the DC hub, has become a hot topic.

DC distribution clearly makes sense when the main power source is a battery producing DC because you can eliminate a transformation step, but it is increasingly being applied on larger hybrid systems and even pure diesel/gas-electric powertrains. This can present challenges in terms of electrical losses.

Time to cut your losses?

If your main power source onboard is a diesel generator that produces AC and your main consumer is an electric motor or the hotel load, both of which require AC, pure physics tells you that converting the power to DC and then back to AC produces heat and creates additional electric losses.

For propulsion power, the conversion losses with a DC hub are 3.5 to 4%, while with a classic direct front-end AC distribution system the losses measured between the generator and the motor are just 1.5%. For auxiliary power and hotel load a DC hub suffers losses of between 5 and 9% between the generator and the AC grid, while with an AC system the losses are just 1%.

One of the arguments put forward to counter this is that the DC Hub’s additional electric losses are offset by the efficiency gain offered by variable-speed gensets. A classic diesel-electric powertrain uses between three and six gensets to meet onboard power demand; when demand rises another genset is simply brought online to make up the shortfall. But if the system is poorly designed, the gensets will only run at 45 to 50% load, increasing vessel fuel consumption. Variable speed gensets on the other hand adapt their speed to the load and have a higher efficiency at low loads and the same efficiency as a classic diesel-electric powertrain at high loads.

DC distribution has one potential advantage over traditional AC arrangements when it comes to using variable-speed gensets. Many small consumers – from pumps and fans in the electrical system to coffee machines and photocopiers – rely on fixed frequency electricity and may not work optimally with the variable frequency. DC hubs deliver electricity to small consumers at a fixed frequency, meaning they can then be optimised independently. The calculation is whether this efficiency offsets the energy losses inherent in the electricity conversions.

To back up the argument for DC hubs, proponents will typically use a comparison curve from a high-speed engine, where the gap between fuel consumption at variable speed and constant speed is greatest. However, medium-speed engines are typically used for DC hubs, so in reality this gap is smaller.

In a hybrid propulsion system, where a battery is added into the mix, the case in favour of DC hubs becomes even weaker. If you add the electrical losses already mentioned to the variable-speed genset-specific consumption, the constant-speed genset is better at loads above 60 to 70%. The auxiliary load losses caused by the DC/AC converter are in addition to this.

In diesel-electric systems the separate propulsion chains – let’s say two propellers for a RoPax ferry or six thrusters for a wind turbine installation vessel – are connected via a circuit breaker. In a well-designed AC system there are no losses, but DC systems will suffer additional losses of 0.6% to 3% due to the DC circuit breakers. If you run your wind turbine installation vessel’s six thrusters with two of the six gensets in dynamic positioning mode, these losses are fourfold. 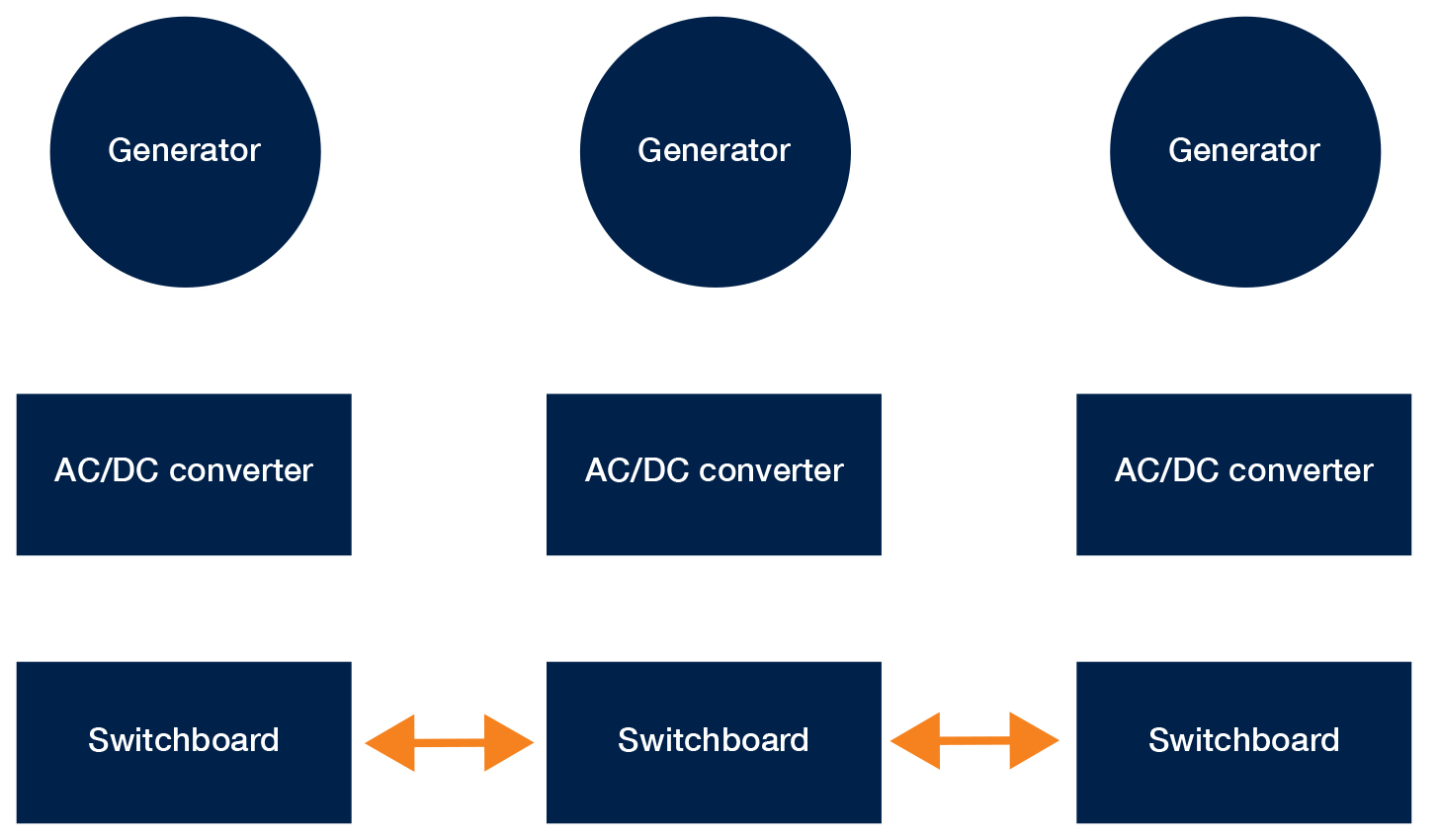 DC hubs are no silver bullet

It is clear that DC hubs can make sense for fully electric battery-driven vessels or smaller hybrid vessels with small high-speed engines. However, it is also clear that they are not an optimal solution for high-powered vessels with many engines or large medium-speed gensets, or for larger hybrid vessels. For these types of applications the optimal solution is to combine the best of both worlds by connecting the gensets to an AC grid and connecting the batteries and selected consumers separately to small DC hubs that are part of the total diesel-electric hybrid power train.