Container ships emit on average around 170 decibels at source, about the sound of a loud rock concert. Underwater noise emitted by ships is increasingly seen as a form of pollution that needs to be reduced. Could Wärtsilä's EnergoProFin be the solution? Vancouver Port Authority definitely thinks so.

Container ships emit on average around 170 decibels at source, about the sound of a loud rock concert. Underwater noise emitted by ships is increasingly seen as a form of pollution that needs to be reduced. Could Wärtsilä's EnergoProFin be the solution? Vancouver Port Authority definitely thinks so.

For whales, dolphins and narwhals, the arrival of noisy container vessels, bulk carriers and other marine traffic into their habitats can be fatal.

These animals, like other marine mammals, use sound to communicate with each other (and even locate prey), underwater. Their sensitive hearing could be easily damaged by loud underwater noise.

“When the noise level is really high for them, they get confused. Their navigation systems fail, they get lost and can't find food, and then they die because they can’t eat,” says Carlo Pestelli, Wärtsilä's R&D Manager in Noise & Vibration. “It is sadly that simple.”

Underwater noise can damage the ears of marine mammals, causing profound hearing loss. The impact on other marine life is much less well-known, but it is undoubtedly significant.

Tragically, the amount of underwater noise is growing almost everywhere. A 2014 study found that global marine traffic had increased fourfold since 1992.

“The noise is increasing by 3dB per decade. We can say sort of doubling every ten years,” Pestelli says.

Container ships emit an average of about 170 decibels of sound at source, equivalent to 111 decibels in air. This is about the same as a medium-sized helicopter or a loud rock concert.

The seismic air guns used for geological surveys, for oil exploration globally, emit up to 260 decibels, which one 2017 study showed was enough to kill two-thirds of zooplankton for more than a kilometre on either side.

“And there’s no sign of it decreasing because there’s not any strong regulation in place, yet,” notes Pestelli.

There may be no regulation in place, but it is certainly coming. The IMO in 2014 approved guidelines on reducing underwater noise from commercial shipping.

The Vancouver Fraser Port Authority this year included measures to reduce underwater noise in its EcoAction programme. Launched in 2007, the programme offers discounts on harbour dues to commercial cargo ships meeting voluntary environmental best practices that reduce emissions, underwater noise and other environmental impacts. These practices include obtaining third-party environmental designations, using cleaner fuels, and noise-reducing technologies. From the start of this year, ships fitted with Wärtsilä's EnergoProfin device will be entitled to a 23% discount on port fees.

“It’s really coming from Canada, but if they do a good job I think it will spread to the rest of the world,” he says. “In the old days, people only thought what came out of the funnel was an emission. Nowadays underwater noise is also regarded as an emission from the ship.”

Technology for a new pollution

Wärtsilä has had a head start in supplying solutions to the problem. Between 2012 and 2015, Pestelli and other Wärtsilä researchers collaborated with other equipment suppliers and academic researchers on the EU-funded SONIC project, which aimed to develop tools to investigate and mitigate the effects of the underwater noise generated by ships’ propellers.

Engines can also be a source of marine noise, but that problem is easy to solve by using resilient mounting. This isolates the ship’s hull from the vibration coming from engines.

Propeller noise is more challenging though. Most propellers generate a hub vortex in their slipstream. This rotates so fast that the pressure in the inner core becomes low enough for water to evaporate, a process called ‘cavitation’. When the pressure begins to increase again, the vapour bubbles collapse.

“The collapse of the vapour bubbles creates an enormous amount of noise that can travel a long distance,” explains Anton Voermans, Manager of Hydrodynamic Design at Wärtsilä.

This is where EnergoProFin can help. The propeller cap looks like a small extra propeller mounted behind the actual propeller. 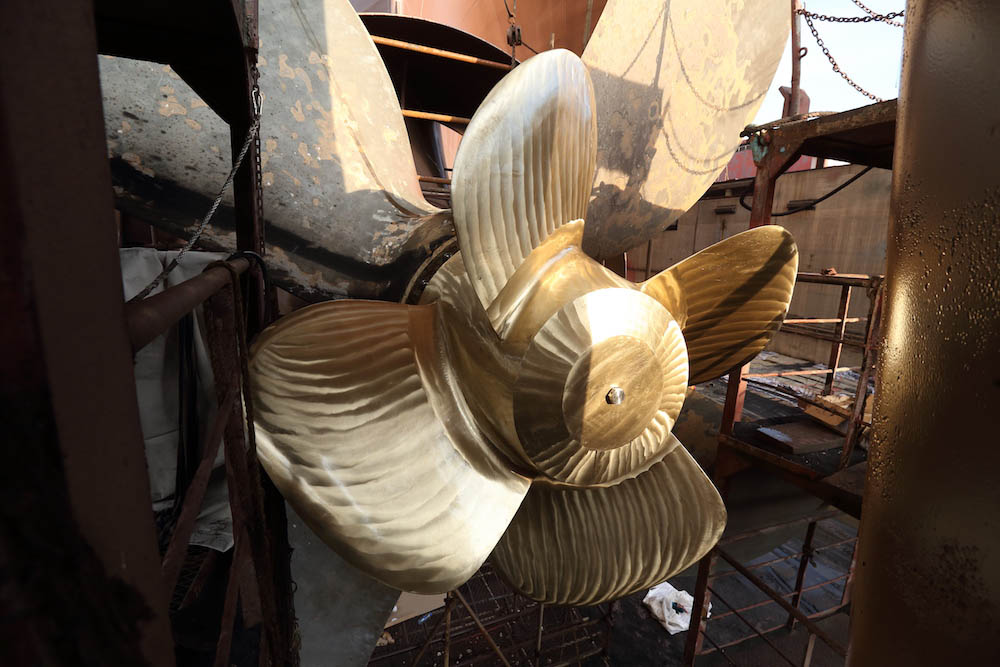 EnergoProFin was initially designed to increase the efficiency of the propeller by about two percent by regenerating the energy lost to hub cavitation. But as a side effect, it also makes the propeller quieter.

Voermans’ team has also produced a second efficiency-boosting device, EnergoFlow. which reduces propeller noise. EnergoFlow  is a set of stator blades fixed to one side of the hull to direct the flow of water into the propeller (in technical terms, a 'pre-swirl stator'). This reduces the 'sheet cavitation' caused by the tips of the propeller.

“You have a much better inflow into the propeller. That leads to higher efficiency, but it also leads to a quieter propeller,” says Voermans, technical lead on both projects.

EnergoFlow is still at the pilot stage so it has not yet been put forward for the Port of Vancouver's EcoAction program, but similar products have been approved.

Both the devices improve efficiency and reduce noise, a win-win that is unusual in propeller design.

“In general, measures to control cavitation come at the cost of efficiency,” Bulten says. “They're conflicting. The highest efficiency propellers will also be very noisy.”

Next steps for future compliance

Bulten expects regulation over noise emissions to follow the pattern set by sulphur and nitrogen regulations, starting in sensitive areas and then spreading and tightening from there.

Pestelli’s noise and vibration research team is already in discussions with customers about developing sensors in future which could measure the underwater noise produced by the ship in real-time. These could then be put together with control mechanisms allowing the crew to adjust speed to keep cavitation to a minimum, and make their ship compliant when entering controlled waters.

Wärtsilä has already supplied an ultra-silent propulsion system for a Faroe Islands’ research vessel, the propellers of which produce next to no cavitation. Frigates and submarines have also long been equipped with quiet propellers. But doing this means sacrificing perhaps four to five percent in propeller efficiency, a price no container vessel operator could currently pay unless forced to by regulation.

“Once they are willing to do so, then we are more than happy to design silent propellers for container ships and bulk carriers, because we have sufficient skills to do that,” Voermans says.