It was big news for the automotive industry when hybrid cars became production models rather than a hypothetical concept. The marine industry is now moving in the same direction, thanks to Wärtsilä’s groundbreaking new hybrid power module for ship propulsion.

It was big news for the automotive industry when hybrid cars became production models rather than a hypothetical concept. The marine industry is now moving in the same direction, thanks to Wärtsilä’s groundbreaking new hybrid power module for ship propulsion.

Hybrid propulsion for ships, as such, is nothing new. After all, a hybrid combination of sails and steam was used long ago, and it is more than 100 years since submarines with diesel-electric drive were introduced. However, the new Wärtsilä HY is the marine sector’s first hybrid power module of this type ever produced, and it sets a new industry benchmark in marine hybrid propulsion.

It would be, one can assume, only a matter of time before ships progressed into the world of hybrid propulsion running on a combination of conventional engines and energy storage systems. But the task has not been easy for various reasons, and the set of aims is rather broad. For example, not only does hybrid ship propulsion improve fuel efficiency and reduce exhaust emissions, it also needs to attain efficient power management, flexible layout solutions, and reduced noise and vibration. The Wärtsilä HY has been developed to meet all these needs.

The need to lower fuel costs and reduce emissions is common to owners and operators around the world. But compliance with strict environmental legislation is a becoming a global requirement. By being able to switch from a conventional engine based energy source to electrical storage power when sailing in harbours or close to population centres, for instance, legislative restrictions can be overcome and fuel can be saved. It is widely expected that hybrid propulsion solutions will represent a significant percentage of all contracted ships within the next ten years. 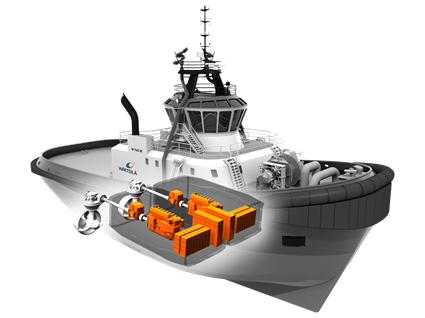 The introduction of the Wärtsilä HY marks the beginning of a new era in marine propulsion, and an important step along the road towards optimal operational efficiency. Development of the groundbreaking Wärtsilä HY has been made possible by the company’s unique position as a total solutions provider. With extensive and unmatched in-house capabilities in developing and controlling both the engine technology and electrical and automation (E&A) systems, the company has been able to combine these competences to create a deeper level of product control.

The result is an unprecedented innovation leap in this field. The hybrid power module produced combines engines, an energy storage system, and power electronics through a new, highly sophisticated, and fully integrated energy management system (EMS).

This latest generation, specifically designed EMS, works as the overall ‘brain’ for the Wärtsilä HY product. It not only controls the energy flows between the different power sources, but also adds performance optimisation features with respect to emissions, trim and route, and the monitoring of long-term vessel performance. Furthermore, it creates an entirely new level of interaction with the ship’s onboard systems, thereby providing enhanced operability and greater predictability.

Giulio Tirelli, who is Director of Marine Engineering at Wärtsilä Marine Solutions, is emphatic about the impact on the industry that the Wärtsilä HY will have. “This development opens the door to a new era of marine technology that would have been unimaginable until very recently. It is made possible by Wärtsilä’s unmatched product portfolio and extremely broad range of in-house expertise, which, together, give us the possibility to combine technologies from quite different fields. This in turn strengthens our leadership position in front-end innovation, which provides unrivalled benefits to our customers and partners.”

By utilising a propulsion system with multiple operating modes, the system’s response to differing conditions can be optimised, while the vessel’s fuel efficiency and overall performance are notably enhanced. The glaring difference between the Wärtsilä HY and other hybrid systems is that performance enhancement can be guaranteed with the former. At the same time, a higher level of redundancy compared to conventional solutions promotes increased safety. Wärtsilä’s advanced logic control technology enables better fuel consumption performance than with conventional systems, even when the load varies. Importantly, there is instantaneous load acceptance with rapid response to step-load changes.

The list of customer benefits provided by this latest Wärtsilä innovation is indeed long. Central to all of these advantages is the increase in operational efficiency, which in turn has a direct beneficial effect on fuel consumption and exhaust emissions. In fact, in “green” mode, there are zero emissions, while in all modes – from start-up to full power output – the operation is smokeless, thanks to a new Wärtsilä patent pending procedure. Additionally, the reduced engine operating time lowers the maintenance requirements while also extending the intervals between overhauls. The Wärtsilä HY also comes with entire system certification.

Clearly, the exact needs and operating criteria of vessels vary tremendously, depending upon the type and the sector being served. For example, one could hardly expect that the requirements for harbour tugs are the same as those for a cruise ship. Thus, a single solution that suits all vessels probably means that it is not entirely suitable for any particular type of ship.

For this reason, the Wärtsilä HY will have dedicated versions specifically designed for each category of vessels. The first versions being made available will be adapted to suit the exact needs of tugs, medium sized ferries, and medium sized cruise ships. It represents the first new product launch for this type of product where each individual version is dedicated to a specific market. Wärtsilä will follow these initial introductions with dedicated versions of the Wärtsilä HY for other vessel segments in due course. This approach is quite unlike the typical product introduction, where the aim is to reach as many markets as possible with a single unit.

As Giulio Tirelli, Director of Marine Engineering at Wärtsilä Marine Solutions, points out: “Stay tuned, additional versions are coming, and with this new product we are moving the shipping industry from being on the brink of hybrid propulsion to a position where it is truly viable. The Wärtsilä HY will, I believe, prove to be the catalyst for establishing a new way of thinking in the industry.”