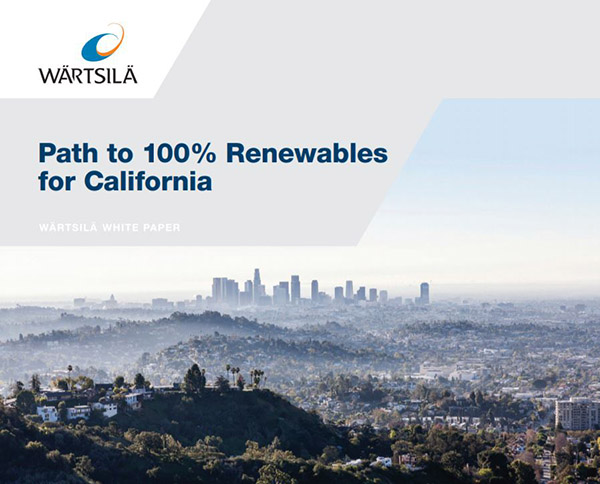 State-of-the-art power-system modelling reveals that California can reach its renewable energy and emissions targets faster than planned while saving ratepayers billions of dollars. Energy experts delivered the details and an accompanying white paper during a webinar, California’s Faster, Cheaper Path to 100% Clean Power, hosted by the technology group Wärtsilä on 18 March. The event was part of the Path to 100% initiative, which is building a community of experts who support moving toward 100% renewable energy.

“Results of our PLEXOS power-system modelling shows California can reach its renewable electricity target by 2040 instead of its current goal of 2045, while also ensuring Californians a steady and reliable flow of power,” said Antti Alahäivälä, Manager of Business Development at Wärtsilä Energy Business.

California gets about 30% of its electricity from renewable sources. To compensate for renewables’ variability and keep the grid balanced, the state depends on fossil-fuel-powered plants. These traditional gas power plants are inflexible. They cannot switch off quickly when the sun shines brightly and then switch back on a few hours later; rather, they must stay online all the time. So in California, solar energy is being curtailed and at the same time fossil-fueled power plants are operating. Until this issue is addressed, there is a limit to how much renewable energy the grid can handle.

“Powering California using solar, wind and battery storage is technically possible, but extremely costly,” said Heikkinen. “By 2045, providing the state enough reliable electricity without relying on fossil fuels would require battery storage of 410 GW/ 1624 GWh, which is more than 1,000 times the existing U.S. battery storage fleet. But the optimal alternative — adding flexible gas generation to this mix — would reduce the need for battery to 158 GWh, reducing electricity generation costs by 61%.“

The Optimal Path would use curtailed solar and wind power to produce renewable carbon-neutral fuel. This fuel could be stored for use in flexible generation plants, which are designed to switch off and on quickly and run only when needed to balance the power system when renewable energy is not available.

Adding this flexible generation from renewable fuels would help California avoid overbuilding renewable generation and battery storage: it would cut solar and wind capacity requirements by 8 GW compared to renewables plus battery storage alone. That would reduce the amount of land needed for solar panels and wind turbines by hundreds of miles, cut costs, alleviate land-use conflicts, and mitigate environmental concerns such as habitat loss.

Wärtsilä Energy Business in brief
Wärtsilä Energy Business leads the transition towards a 100% renewable energy future. We help our customers unlock the value of the energy transition by optimising their energy systems and future-proofing their assets. Our offering comprises flexible power plants, energy management systems, and storage, as well as lifecycle services that ensure increased efficiency and guaranteed performance. Wärtsilä has delivered 72 GW of power plant capacity in 180 countries around the world.
https://www.wartsila.com/energy/

Wärtsilä in brief
Wärtsilä is a global leader in smart technologies and complete lifecycle solutions for the marine and energy markets. By emphasising sustainable innovation, total efficiency and data analytics, Wärtsilä maximises the environmental and economic performance of the vessels and power plants of its customers. In 2019, Wärtsilä’s net sales totalled EUR 5.2 billion with approximately 19,000 employees. The company has operations in over 200 locations in more than 80 countries around the world. Wärtsilä is listed on Nasdaq Helsinki.
www.wartsila.com