Inspired by the Refugee Olympic Team in Rio last year, Wärtsilä and the Finnish peace broker organisation Crisis Management Initiative gave the annual ‘Philanthropy in Sports’ award to be used to promote sports opportunities for refugees. The award was accepted in the Finnish Sports Gala in Helsinki on 17 January 2017 by the team’s “Chef de Mission” and the 2016 UN Person of the year, Tegla Loroupe and one of the team’s athletes, Yiech Pur Biel from South Sudan.

As the chairman of the International Olympic Committee Thomas Bach has said, the Refugee Olympic Team is a symbol of hope for all the refugees in the world. It makes the world better aware of the magnitude of this crisis. “It is also a signal to the international community that refugees are our fellow human beings and are an enrichment to society. These refugee athletes show the world that despite the unimaginable tragedies that they have faced, anyone can contribute to society through their talent, skills and strength of the human spirit.”

The Refugee Olympic Team was formed for the Olympic Games in Rio de Janeiro in 2016 as a joint initiative by the International Olympic Committee and the United Nations Refugee Agency. The team comprised of ten athletes from Congo, Ethiopia, South Sudan, and Syria, competing in athletics, swimming and judo.

As a child, Yiech Pur Biel, one of the Refugee Olympic Team’s athletes, fled without parents from his home in Sudan to escape a civil war. In 2015 he was selected to join the Tegla Loroupe Foundation that holds athletic trials. Nowadays Tegla Loroupe herself trains him in Kenya, along with four other middle-distance runners from South Sudan selected for the Olympic refugee team. Biel praises the work Loroupe does for the refugees: “Tegla is our mother, not only our leader. Most of us run because of war. We can forget what happened before. We can celebrate. We can have hope, like everyone else.”

Philanthropy in Sports award
Finnish Sports Gala (Suomen Urheilugaala) wants to emphasize the importance of charity with the special ‘Philanthropy in Sports’ award. The annual award of 10,000 USD is donated by Wärtsilä and given in cooperation with Crisis Management Initiative, to be used to a charity target of the receiver’s choice.

The Crisis Management Initiative (CMI)
CMI is an independent Finnish organisation that works to prevent and resolve violent conflicts through informal dialogue and mediation. As the lead partner since 2011, Wärtsilä supports the activities of CMI and creates partnership programmes with CMI in selected areas across the globe. 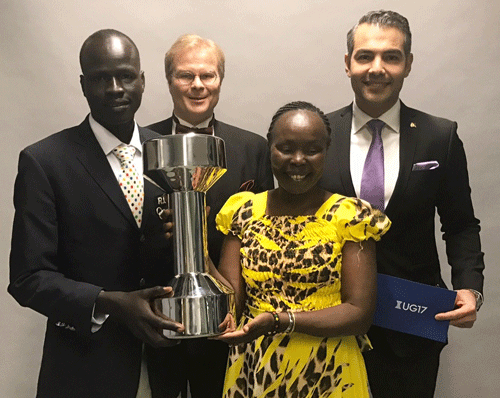 The award was handed over by Hussein al-Taee from CMI, and Atte Palomäki from Wärtsilä.