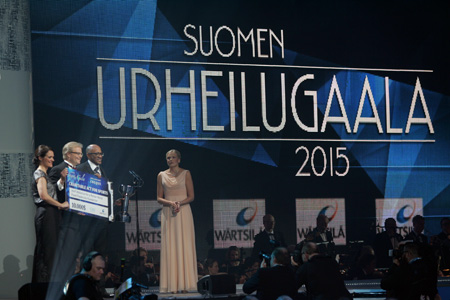 The ”Athletics for a Better World” programme by the International Association of Athletics Federation (IAAF) received a special Sports Philanthropist award in the Finnish Sports Gala in Helsinki on 13 January 2015. The award was donated by Wärtsilä and given together with the Finnish non-governmental organisation Crisis Management Initiative (CMI).

The “Athletics for a Better World” is a social responsibility programme that supports health, environment, social inclusion and peace with the help of sports. The donation of 10,000 USD will be forwarded to the Frank Fredericks Foundation, which will use the money to educate Namibian athletes in fields like healthy living, HIV and drug awareness.

The award was accepted at the Sports Gala by Namibian sprinter legend Frank Fredericks, who is a member of the boards of both the International Olympic Committee and the IAAF. The award was handed over by Laura Seppälä from CMI, and Wärtsilä’s Executive Vice President, Communications & Branding, Atte Palomäki.

Fredericks appreciates the donation greatly. “Through charity we can create a better world. We will use this donation to the benefit of the youth in Namibia, to give them the opportunity to be better athletes in the future,” he said.

Wärtsilä is committed to being a good corporate citizen, emphasizing the importance of business responsibility and support to the societies where it operates. As part of this work, Wärtsilä is a key partner to the peace building work of CMI since 2011.

“Wärtsilä has a wide and longstanding presence on the African continent. We are proud and honoured to give back to the society there by supporting in the valuable work of the Athletics for a Better World and the Frank Fredericks Foundation,” Atte Palomäki comments the donation. 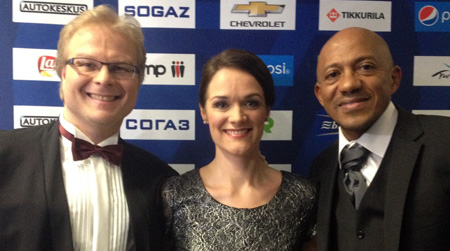 Frank Fredericks
Frank Fredericks is a former sprinter from Namibia. He ran to World Championship in the 200m in 1993. He is also a three-time silver medallist in World Championships and two-time Olympic silver medallist in 100m and 200m. At the World Indoor Championships in 1999 he came first in the 200m. He still owns the Indoor World Record in 200m (19.92) from 1996. Fredericks ended his successful career in 2004 when he finished fourth in the Athens Olympic Games 200m final.

Read more about Athletics for a Better World programme and about the Frank Fredericks Foundation. 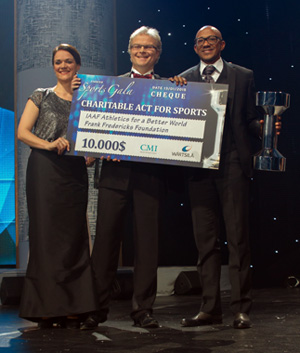