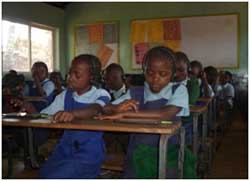 Kenyan first graders in two schools are learning to read this month using a new eLearning application with Wärtsilä support. The application called GraphoGame was originally developed in the University of Jyväskylä, Finland. Wärtsilä is now financially supporting a pilot project in Nairobi which is part of a larger effort to launch the game in several African countries.

GraphoGame has been in use in Finland for almost ten years and has over 250,000 registered users. It aims to teach first graders the very basic language skills which are crucial for learning to read. At present the university and its international research collaborators are working to extend the service to new languages and countries. The Kenya project which Wärtsilä is now supporting is the first effort to localize the game for an African language.

“We are confident that the GraphoGame approach that has been taken into use in Finnish schools can help also Kenyan children to become fluent readers. It is important to learn the first steps in the local language and we can help with that,” says Professor Ulla Richardson (technology-enhanced language learning) from the University of Jyväskylä.

“Learning has improved in the classroom. The game should be introduced to the whole school as it helps learning a lot especially in classes with huge number of pupil,s, states teacher Ms Faith from Kibera primary school, Kenya. 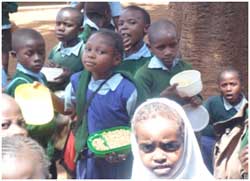 Students, who also get a free lunch during the project with Wärtsilä support, seem to agree: “I now like coming to school because I can play the game,” tells 1st grade student called Timothy from Kibera school.

“The game is helping me to learn to read.” tells Juma girl from Ayany Primary school, Kenya.

Part of the funding for the school project was provided by Wärtsilä Corporation as part of its corporate charity program. Developing training and education is one of the three key action areas in Wärtsilä’s charity program. Other key areas are youth and student activities and environmental protection.

GraphoGame was originally designed at the University of Jyväskylä together with the Niilo Mäki Institute (an organization focusing on children’s learning difficulties. GraphoGame™ is a registered trademark.