The installation of controllable pitch propeller (CPP) blades with an innovative design along with a new control system on the MV Henrike led to fuel savings of hundreds of litres a day.

When  the general cargo ship MV Henrike went into dry dock to repair damage to its propeller, owner ATR Landhandel saw an opportunity to address ongoing propulsion issues. The vessel had been running very inefficiently, with high fuel consumption and a loud propeller. In fact, the propeller saw damage after just a year due to cavitation. ATR Landhandel reached out to Wärtsilä to see what could be done.

Between April 2017 and July 2018, Wärtsilä installed a set of new design controllable pitch propeller (CPP) blades alongside a more modern control system with the option to use a combinator mode controls system using a combinator curve. This functionality enables the propulsion system to run with optimum efficiency thanks to optimised pitch settings.

The original analogue control system – which controls a combination of propeller pitch deflection and revolutions per minute (RPM) – only had one knee point on which the propeller pitch curve could be narrowed to the engine limit curve, leading to a lot of noise and vibration. With the new digital system running in combinator mode, there are more knee points available for use, producing an optimum propeller speed and pitch relation.

“Because you can put a lot more points in for each handle position on the ship, you can always choose the optimum RPM and pitch – resulting in fuel savings,” explains Arne van de Mortel, hydrodynamic design engineer at Wärtsilä Netherlands. 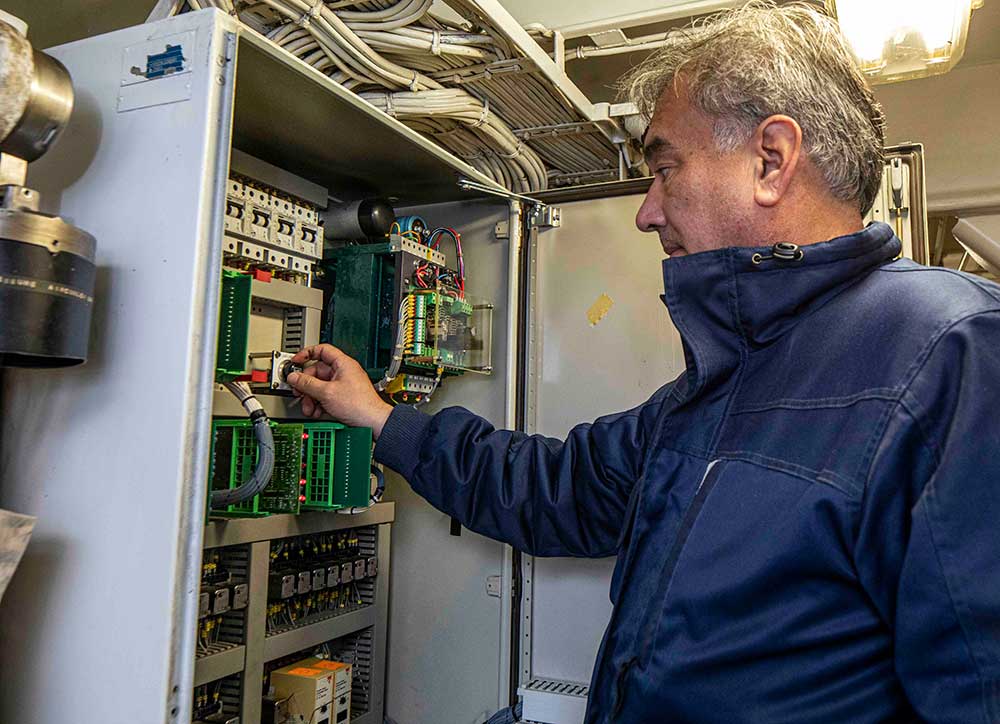 The upgraded control panel on the MV Henrike.

The results were a greater than expected fuel saving of 800 litres per 24 hours, equalling a reduction in emissions of roughly two tonnes of CO2 per day. Given that the ship can spend approximately 210 days on the water a year, this can represent a saving of 170,000 litres of fuel per annum, according to ATR Landhandel.

“We couldn’t believe that we could save 800 litres per 24 hours while keeping the same speed,” says Michael Hinz, shipping manager at ATR Landhandel. “We didn’t go slower or faster, we kept at 9 knots. So we have the same power output on the water, but with 800 litres less fuel. My boss didn’t believe it.”

Benefits for those on board and the environment

The quieter engine and decreased vibration in the new system provided other benefits as well. Those on board have a smoother journey and there is less disruption to the underwater environment.

Additionally, there is less pressure put on the ship’s structure.

“When you’re constantly running your main engine on full revolutions and then drive the pitch propeller into an inefficient working window, the pressure pulses get higher and shake the whole vessel,” says Stephan Bolln, sales manager, propulsion service sales at Wärtsilä Germany. “Then you come to the point your cup of coffee is moving off the edge of the table. This is also not beneficial for the rest of the material, as you can imagine.”

This lack of wear and tear on the ship structure after the upgrade is reflected in the fact that ATR Landhandel has not seen cavitation damage on the propeller blades, which would normally have to be repaired every two years.

But it wasn’t just the team at Wärtsilä and ATR Landhandel who were surprised at the success of the retrofit. One night, while the MV Henrike was navigating the Kiel Canal, the captain came running on to the bridge in his underwear because he thought the main engine had stopped. It hadn’t – it was just running so quietly that it caught him off guard.