Wärtsilä HY is the first, integrated hybrid power module in the marine market. An alternative to belching smokestacks, this green and efficient propulsion module was developed by maximising synergies in the group. With Wärtsilä as a single supplier, it is a new benchmark in alternative propulsion.

Wärtsilä HY is the first, integrated hybrid power module in the marine market. An alternative to belching smokestacks, this green and efficient propulsion module was developed by maximising synergies in the group. With Wärtsilä as a single supplier, it is a new benchmark in alternative propulsion.

For vessels like tugs, ferries, dredgers and others, this single Wärtsilä HY hybrid power module represents a giant stride towards achieving a greener international fleet, cutting costs and improving vessel performance and services.

Wärtsilä HY was unveiled in May 2017 at the Nor-Shipping trade fair in Norway and has already achieved the ‘Approval in Principle’ classification with Lloyd’s Register.

At the event, the Genoese tug operator Rimorchiatori Riuniti, the biggest tugboat operator in Italy and the Mediterranean, signed a historic deal with Wärtsilä to contract the Wärtsilä HY integrated hybrid power module for its fleet of 60 harbour tugs, 18 offshore vessels and three ocean going ships.

Some key macro trends are responsible for the Wärtsilä HY roll-out today. For one, the automotive industry has for years championed the use of hybrid technology, or battery-assisted propulsion. As a result, battery costs have dropped while their performance has increased, shoeing in hybrid technology into other fields such as shipping, where traditional engine technology is now quite mature.

Boosting ship performance has been on the wish list of many operators. Stricter environmental demands are also looming ahead for the industry.

Hybrid propulsion is expected to be the technology of choice for a substantial part of the shipping industry in the near future. Technological advances have reached such a level that the incremental improvement of conventional diesel engines is just not enough anymore as any small gain requires disproportionate resources. What is required instead is a drastic change of mindset to go beyond the physical limits of the individual product. And this is where Wärtsilä HY comes into play.

What is Wärtsilä HY?

The Wärtsilä HY integrated power module consists of a smart and well-driven combination of mechanical power and energy storage. It is the culmination of Wärtsilä’s industry-leading expertise in both engines technology and electrical and automation systems, including hybrid applications, and is the result of a unique range of in-house competencies.

What differentiates the integrated Wärtsilä HY module compared to a traditional hybrid system is that Wärtsilä delivers the whole package so that all the elements can seamlessly work together controlled by one integrated software system, the Energy Management System, or EMS. Some call it the ‘brain’ of the system.

Using batteries for marine propulsion is not new per se, but the Wärtsilä HY marine hybrid power module is special because it is a single innovative product steered by the EMS software. This core or ‘brain’ of the Wärtsilä HY makes the electrical components one integrated product, whereas previously this integration was an afterthought stitched together by different suppliers. This harmonisation creates an entirely new level of interaction between its internal components and with the ship’s onboard systems, thereby providing enhanced operability and greater predictability.

Specifically, this unified EMS means that the energy flow is optimized to achieve the best performance in each operational mode. This kind of total control was not possible when an energy storage system was simply added to the mix without all the corresponding components working in unison.

In order to match the specific demands of different market segments, Wärtsilä HY comes in highly customizable forms which is made possible by tuning the proprietary EMS software and by optimally sizing the internal components.

The standard mechanically-driven configuration includes a main engine with clutch, an in-line shaft generator/motor, an energy storage system, DC link and power drives and the EMS. The standard electrically-driven configuration includes a generating set, an energy storage system, a DC link and power drives, and uses the EMS as well. 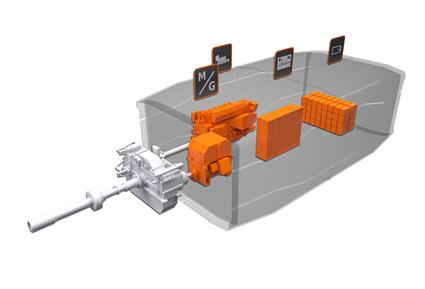 The Wärtsilä HY is a fully integrated hybrid power module in a diesel-mechanical configuration.

The Wärtsilä HY configuration is based not only on the maximum power demand of the ship, but also on its specific operational profile (i.e. how much power for how long, mode of operation, etc.). The time factor also enters the equation, and the dimensioning approach evolves from power-based to energy-based. And an optimal balance between engine power and energy storage leads to a more compact design which requires fewer cylinders running at a higher efficiency loading rate. This of course reduces maintenance costs in the long term.

In its Diesel-mechanical version, Wärtsilä HY uses two separate key components: an internal combustion engine and an electric motor/generator, the latter being connected to the electrical grid (hence to the energy storage system). These components work in synergy with each other allowing for instant load-taking, green mode, start&stop, peak shaving, power boost, hence more redundancy, higher safety, less engine running hours and higher efficiency. All these features can be obtained with even more ease in the Diesel-electric version, where the combustion engine can directly generate electrical power through a generator.

Furthermore, the EMS is finely tuned to the vessel’s design and operational profile throughout its lifecycle. This guarantees that every specific ship is designed and operated in the best possible way, according to the actual operating profile.

Generally, hybrid power systems improve fuel efficiency and reduce emissions quite simply because batteries are used to do some of the heavy lifting instead of diesel engines. In the case of Wärtsilä HY, the package is optimised for specific operating profiles be they tugs, ferries or dredgers allowing ship operators to attain efficient power management, flexible layout solutions, and reduced noise and vibration, among other benefits.

With the Wärtsilä HY onboard, directed by the EMS‚ a tug for example can sail out of a densely populated port in ‘green mode,’ i.e. powered exclusively by the batteries, and then assisting operations can be carried out with the diesel engines on and the batteries then cover all the load peaks and power instantaneously. The air quality impact of shipping in populated areas is thus reduced.

Another finesse of Wärtsilä HY is the cold-systems start-up, which essentially does away with the need to wait for the engines to warm-up prior to operations. This is instead overcome by the energy storage system leading to instant ship readiness. This instant availability of energy stored in the batteries is also a safety measure. This stable and efficient engine loading is due to the EMS peak shaving function where load fluctuations are absorbed.

Central to all of these advantages is an increase in operational efficiency, which in turn reduces fuel consumption and emissions.

In fact, in “green” mode, there are zero emissions, while in all modes – from start-up to full power output – the operation is free of visible smoke, thanks to a new Wärtsilä patent-pending procedure. Additionally, the reduced engine operating time lowers the maintenance requirements because the engines are running fewer hours in total.

To summarize, Wärtsilä has leveraged its technological leadership in both engines and electrical & automation systems to set a new industry benchmark in marine hybrid propulsion. Through combining its unique range of in-house competences, Wärtsilä has turned a complex system into an innovative single product that delivers unrivalled and guaranteed performance. The module is tailor-designed for individual vessel market segments and can be optimized for specific operating profiles, thanks to EMS. And with Wärtsilä as a single supplier for all this, performance is guaranteed.

Wärtsilä’s new portfolio of tug designs emphasises environmental sustainability. They draw inspiration from Wärtsilä HY technology – which provides flexibility and efficiency to the operation of the tug – and the company’s proven LNG technology.

The Wärtsilä HY Tug designs have been created in close cooperation with the ABS, BV and Lloyds Register classification societies, and have received the Approval-in-Principle (AiP) certification. The new tug designs feature a very distinctive outlook while providing the power and manoeuvrability for practical tug operations. Its total installed main engine power is less than the conventional hybrid tug designs, while maximum bollard pull is achieved via power boosting from the batteries.

The technology represents a unique innovation in marine propulsion systems. Through its in-house expertise in engine design and electrical & automation (E&A) systems, Wärtsilä has developed a fully integrated hybrid power module combining engines, an energy storage system, and power electronics. These are all optimised to work together through a newly developed energy management system (EMS). It is the marine sector’s first produced hybrid power module of this type, thereby establishing a new industry benchmark in hybrid propulsion.

Applying hybrid technology is expected to reduce harmful emissions of up to 50 percent and achieve significant operational cost savings by reduction in engines running hours by 58 percent when compared with conventional tug designs. In addition to the hybrid technology, LNG-fuelled engines and thrusters, Wärtsilä will also provide shafting and control systems, meaning the entire propulsion system will come from a single supplier. This enables full integration of the overall system for greater efficiency, while also reducing possible scheduling risks for the owner and shipyard.