In the price-sensitive field of electrical power generation, efficiency and flexibility are the hottest commodities. Wärtsilä's newest engine marks a step change in both, delivering an industry-leading efficiency of over 50 percent. The secret to its success is a ground-breaking new design, conceived entirely from scratch, that makes it tough enough to withstand the heavy mechanical loading associated with two-stage turbocharging.

The internal combustion engine has been through a lot since its advent roughly 200 years ago. It's fascinating to consider that, despite all the advancements made through decades of tinkering and tweaking, this 18th-century concept continues to be the basis of so much power production today. And the consensus is that there are still more avenues for design improvement that simply need to be worked out and tested.

It was with this thinking, six years ago, that engineers at Wärtsilä set out to do something that is quite rare among manufacturers of large engines. Rather than improving an existing design, they started from a completely blank slate to develop a new engine family that would be considerably more efficient than anything that had come before.

The result: Wärtsilä 31, available in diesel, dual-fuel and pure gas variants. The last of these is the spark-ignited Wärtsilä 31SG, the 20-cylinder version which produces 12 MW of power. When the first Wärtsilä 20V31SG rolled off the production lines this year, it became the world's most efficient simple-cycle internal combustion engine ever built.

The Wärtsilä 31SG's defining feature is its ability to reach efficiencies surpassing 50 percent – a milestone within the industry. By comparison, simple-cycle gas turbines typically have an efficiency of around 40 percent. Wärtsilä's existing generating sets had already far surpassed that mark, but this new engine widens the gap even further, representing a significant cost savings potential for power producers, as well as lower emissions.

Designing a new engine entirely from the bottom up gave Wärtsilä’s engineers the unique opportunity to examine all of the various factors that contribute to engine efficiency, making improvements in each to achieve the most possible gain. Combustion quality, engine parameters, heat and flow loss prevention, and internal friction were among the issues exhaustively explored and addressed to their fullest.

The most critical advance in the Wärtsilä 31SG, however, was an engine structure designed expressly to accommodate two-stage turbocharging. While the considerable boost in efficiency associated with two-stage turbocharging was well known – the industry had already been experimenting with it for quite some time – no existing engines were capable of taking full advantage of the effect. They simply could not stand up to the loading and strain that results from the step change in firing pressure. To overcome this, engineers gave Wärtsilä 31SG's entire engine structure a very robust design with an unprecedented break mean effective pressure (BMEP) of 30 bars.

Naturally, having a design that incorporates efficiency-boosting concepts is one thing while bringing a new engine to life is another. Development of the Wärtsilä 31SG was a long and complex process that involved extensive computer simulation, testing on a single-cylinder experimental engine then testing on a number of multi-cylinder engines. All this was carried out to guarantee that the efficiency gains would be realized and that the final product would meet the highest standards of reliability. 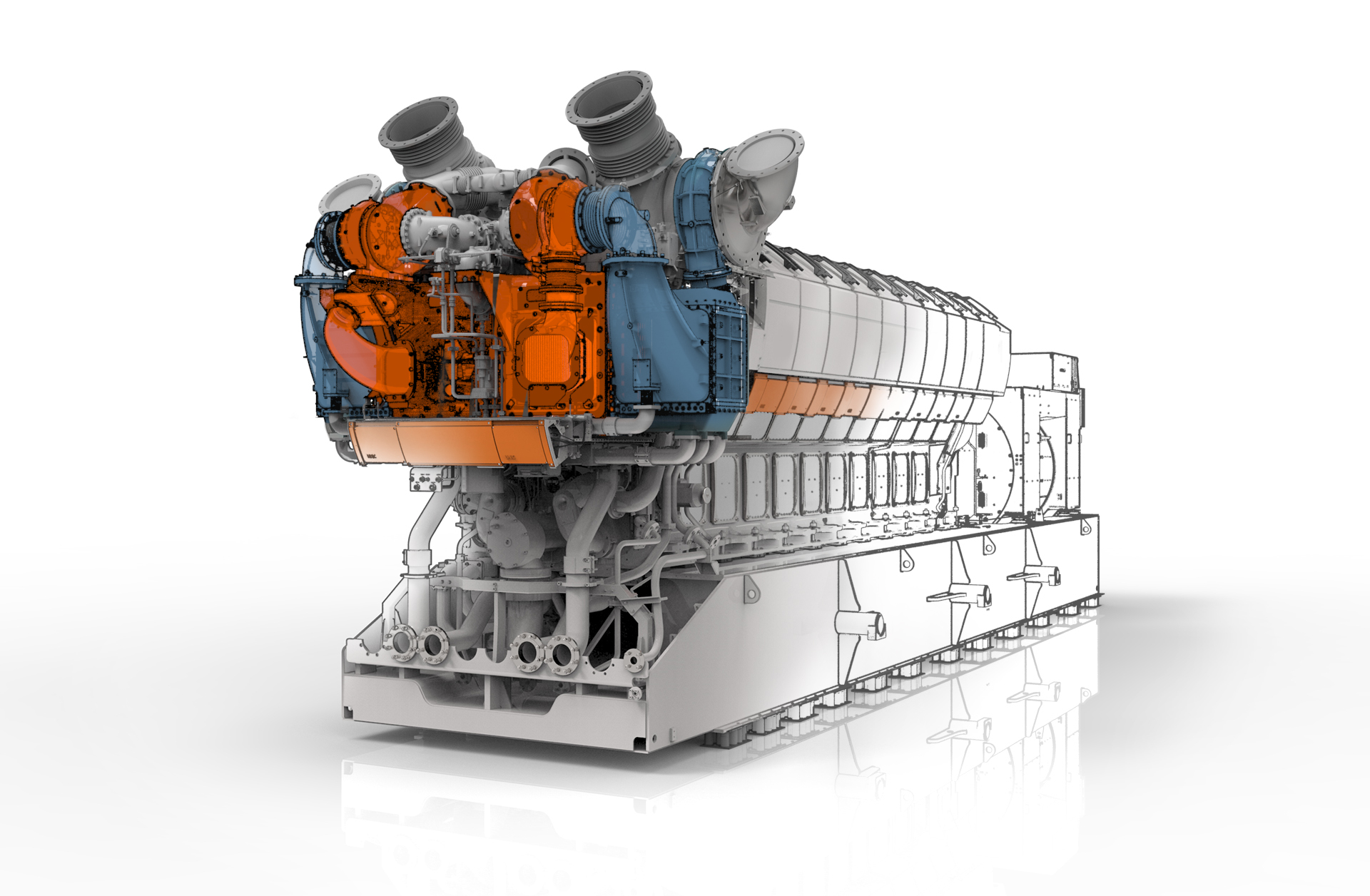 A fundamental advantage of the Wärtsilä 31SG is its flexibility

A fundamental advantage of the Wärtsilä 31SG is its flexibility – its ability to start up quickly and maintain high efficiency throughout the entire load range.

This is extremely important in today's power generation landscape, where the aggressive growth of renewable sources has triggered a disruptive change. Conventional baseload is disappearing as power generators take on the new role of intermittently backing up the grid when the output from renewables dips. This shift represents a huge challenge for plant owners. Combined cycle power plants cannot cope with the daily starts, stops, and continuously changing load patterns that are becoming the new norm.

An internal combustion engine, on the other hand, is just the right tool for the job thanks to its dramatically more flexible operating profile. Needless to say, engineers wanted to push the Wärtsilä 31SG's flexibility to the cutting edge.

A major contributor to the engine's increased flexibility is its completely redesigned valve actuation method. The new design replaced the mechanical, rocker arm-driven valve mechanism of previous models with a hydraulic system, similar to those used in the car industry. This feature allows very smooth and precise control of valve timing to ensure that the fuel-air ratio in the cylinder is optimised at all times. It's in this way that the engine can take maximum advantage of the boost provided by two-stage turbocharging, specifically so on partial loads.

The level of flexibility found in the Wärtsilä 31SG is hard to overstate. The engine can be continuously operated at 10 percent load and can reach full load within as little as two minutes of the start command. 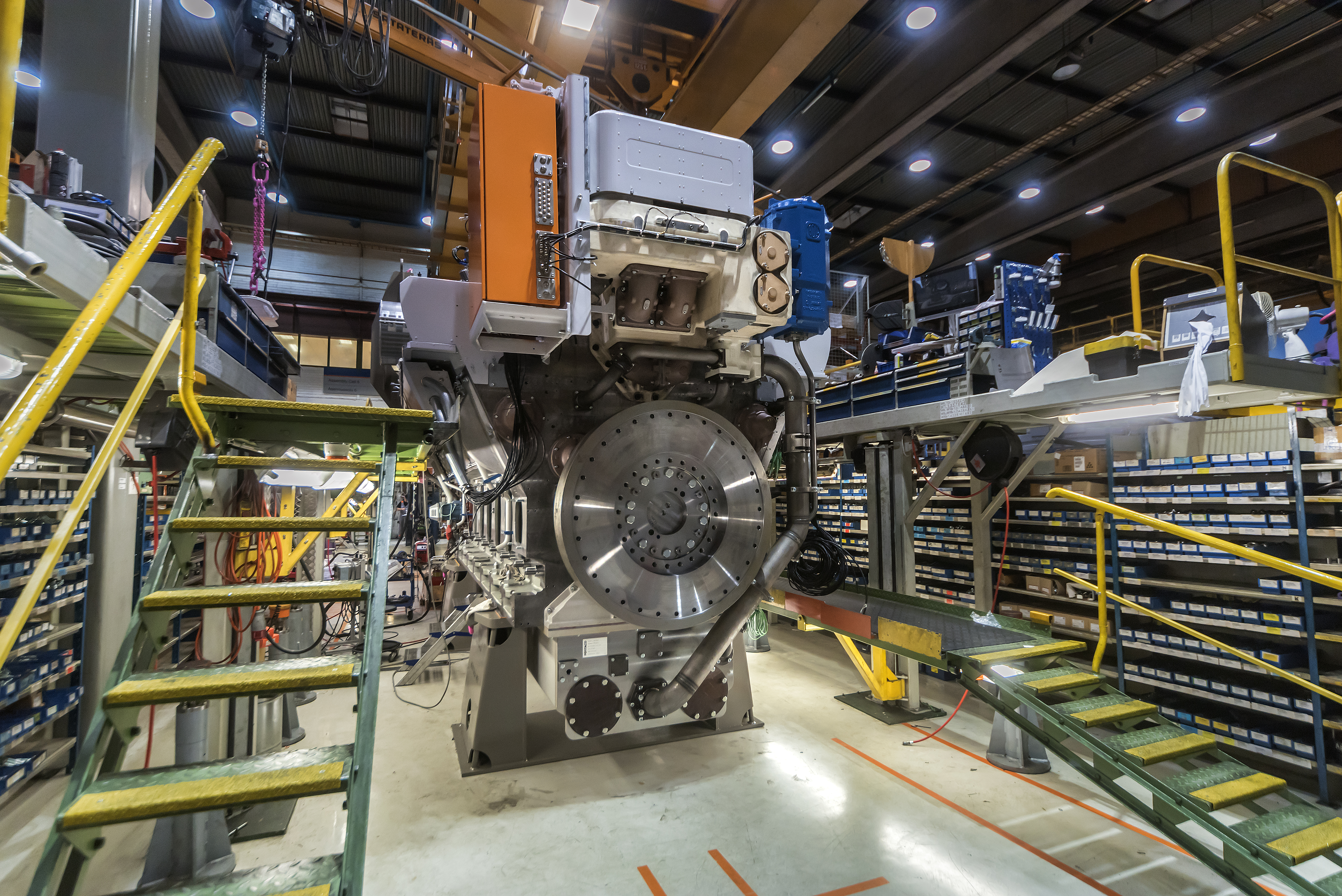 Automation is a key element of any modern gas engine, underpinning efficiency, safety and flexibility, but there are particular requirements for a machine as advanced and complex as the Wärtsilä 31SG. With 20 cylinders each firing six times per second and so many variables coming into play, the ability to easily harmonise and control every aspect of the operation is absolutely vital. Accurate, cylinder-specific control algorithms are essential for a gas engine operating with firing pressures this high.

For this reason, as part of the development of this engine, Wärtsilä went to great lengths to create a next-generation automation system, which is integrated into the engine itself. The engine automation system was built entirely in-house based on new hardware and software.

The engine automation system is distinctive for its wide implementation of digital controls, which regulate valve timing, gas admission, ignition, coolant temperature and various aspects of the turbocharging. It's this high degree of automation that allows the Wärtsilä 31SG to account for differences in fuel as well as run at various loads without compromising efficiency.

The new automation hardware is modular and integrated. All sensors are connected directly to the control ports, without going through connectors or junction boxes – a change that reduces the likelihood of faults. The equipment was also subject to rigorous vibration and heat testing to ensure that it would stand up to the difficult environment of an engine room, further boosting reliability.

The advantage of a more efficient engine like the Wärtsilä 31SG is obvious at times when fuel prices are relatively high. Yet interest in the engine has been strong in all of our markets, despite the fact that gas prices in certain regions are fairly advantageous at the moment. Today's investors recognise that an engine of this type is a long-term investment and that fuel prices can fluctuate radically from year to year, from decade to decade. These investors take a holistic approach, seeking both the lower lifecycle costs associated with prolonged maintenance intervals, and a buffer against potential shifts in the fuel markets.

On a more general scale, the world is likely to see a dramatic reduction in fossil fuel-burning power generation in the coming decades. This change will come about not only because of higher fuel prices, but also from political pressure leading to legal limits on emissions. The solutions that survive the test of time will be those that are most flexible and efficient. In both these categories, the Wärtsilä 31SG has a clear advantage. This is an engine built for the future.