Wärtsilä 31 the most efficient engine in the world

Welcome to a brand-new generation of engines. The Wärtsilä 31 is setting a new standard for energy efficiency, delivering the lowest level of fuel consumption of any four-stroke engine worldwide. It also offers an unprecedented level of operational flexibility and can easily be adapted to accommodate different fuel types and operating profiles. Over the lifetime of the Wärtsilä 31 engine you will enjoy the best support for parts, field service, technical questions, conversions and Service Agreements. The Wärtsilä 31 is quite simply the most fuel efficient, user friendly, versatile engine ever developed.

Welcome to a brand-new generation of engines. The Wärtsilä 31 is setting a new standard for energy efficiency, delivering the lowest level of fuel consumption of any four-stroke engine worldwide. It also offers an unprecedented level of operational flexibility and can easily be adapted to accommodate different fuel types and operating profiles. Over the lifetime of the Wärtsilä 31 engine you will enjoy the best support for parts, field service, technical questions, conversions and Service Agreements. The Wärtsilä 31 is quite simply the most fuel efficient, user friendly, versatile engine ever developed.

The Wärtsilä 31 is not one single engine, but rather a platform consisting of three different products – a diesel engine, a gas engine and a dual-fuel engine. The engines can operate on a wide variety of available fuels, such as Heavy Fuel Oil (HFO), Marine Diesel Oil (MDO), low viscosity or low-sulphur fuels, Liquefied Natural Gas (LNG), ethane gas (LEG) or petroleum gas (LPG).

Ulf Åstrand, Wärtsilä’s Director for Product Development Programs, has overseen the introduction of all the new technologies contained within the new engine. He explains that this is the first time an engine platform has been developed concurrently for all its fuel variants.

“Previous engines were initially developed to run on diesel and subsequently adapted for gas,” he says. “This made it impossible ever to fully optimize their performance and fuel efficiency for the gas or dual-fuel modes.”

“This is a brand-new engine that we’ve developed from scratch,” adds Giulio Tirelli, Director, Engines Portfolio & Applications. “It’s the result of almost ten years of development work and contains the most advanced technologies, opening doors to further future developments.”

The new Wärtsilä 31 is the most fuel-efficient four-stroke engine currently available on the market. The diesel version of the engine consumes on average 8–10g/kWh less fuel compared with the closest competitor across its entire load range. At its optimum point this number can go as low as 165g/kWh. Translated into operating costs, the daily saving for a reference Anchor Handling Tug Supply (AHTS) would reach about EUR 10,000 a day in fuel expenses.

“A fuel efficiency improvement of this magnitude has never been delivered in one single step change,” says Åstrand. “And we did it in one go.”

“Today, fuel efficiency is the ultimate mark of technological advancement,” agrees Tirelli. “And delivering a 10g/kWh upgrade in a single product launch is a dramatic improvement. This engine has reached a level of efficiency that, just a few years ago, was not considered physically possible.” 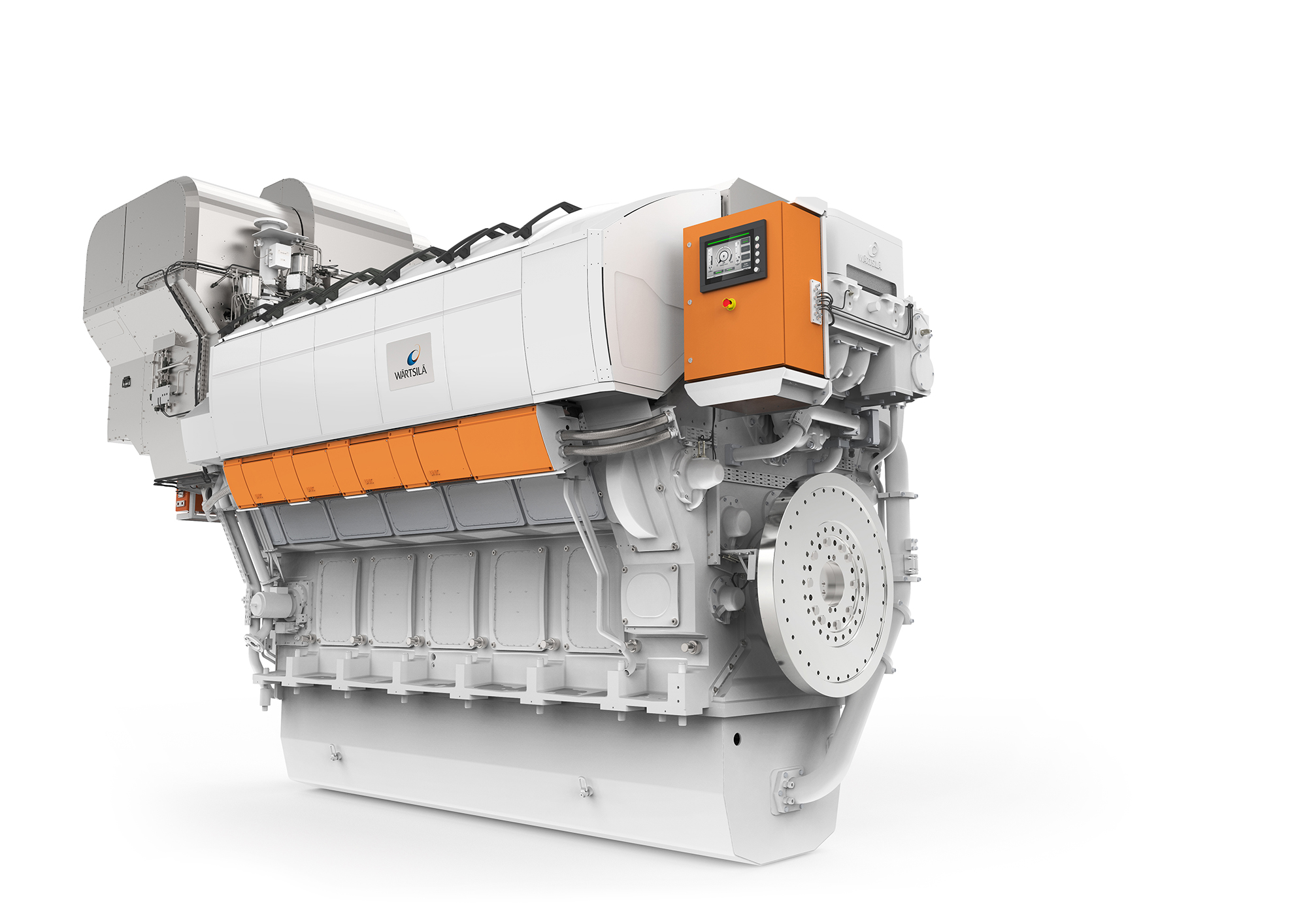 As emissions are caused by burning fuel, it is only natural that an engine that consumes considerably less fuel also produces significantly fewer emissions. The brand-new Wärtsilä 31 not only complies with the existing IMO Tier II emission standard, it also meets the IMO Tier III legislation that will come into force in 2016. Moreover, the dual-fuel concept allows vessels easily to switch between diesel and gas, depending on where they are operating.

“As the market leader in fuel efficiency, the vessel will produce a significantly lower amount of CO2, CO, THC and SOX. With the dual-fuel version, it can operate on diesel in a Tier II area and then switch to gas when it enters a Tier III area (such as an Emission Control Area, or ECA). The switch is instantaneous – there’s no need to wait for the change-over – the vessel can just carry on sailing at the same speed.”

As regards maintenance, the costs associated with the new Wärtsilä 31 have been reduced by approximately 20%. Whereas standard engines of similar output require a first maintenance stop after about 1,000 operating hours, the first stop on the new engine takes place after 8,000 hours.

“Because we know how crucial uptime is to our customers’ profitability, reducing the need for maintenance was one of our top priorities for this new engine,” explains Åstrand. “Not only do its components have a longer lifetime, we’ve also invested a great deal of energy in reducing the amount of time needed to maintain it.”

Remote access to operational data enables advanced support and immediate response from Wärtsilä to ensure the vessel´s or power plant’s safe operation regardless of its location. A dedicated expert with senior level technical experience gives advice to the crew via phone and e-mail. This reduces unscheduled maintenance visits on board.

The modular design of the new Wärtsilä 31 allows for entire engine modules easily to be taken out and replaced. This reduces maintenance time as a module can simply be exchanged, instead of dismounting each individual part.

When an engine requires maintenance, downtime will be drastically reduced as an entire module can simply be taken out and replaced by an exchange unit. The exchange modules are listed in the spare part manual and available from stock.

Operational flexibility is a major concern for offshore applications as many vessels operate at low load but also require fast power-taking capability. Operators need to ensure that they can operate at low loads while maximising fuel efficiency and profitability. The Wärtsilä 31 can easily be adapted for different operating profiles, with a variety of tunings, thanks to the advanced engine automation system combined with the flexibility of the fuel injection and air admission systems. Further improvements for low load operations can also be achieved by installing the low load efficiency package, which includes some mechanical changes.

“Thanks to an extremely high level of automation, we’ve been able to optimise several points that we wouldn’t have been able to adapt in the past,” explains Tirelli.

“Many mechanical systems couldn’t be tuned for different operating profiles, but modern electronic and hydraulic systems are easy to adapt to match the operating needs of the customer,” agrees Åstrand, adding that if an owner wants to change the way an existing vessel operates, it can always be re-tuned to match the new requirements.

Modular design does not only facilitate quick repairs, it also supports future upgrades. According to Ulf Åstrand, it makes the engine “future proof”:

“In the future, when we develop a new technology, the ship owner can simply install the module containing the upgrade. This will be particularly useful when new emission standards are introduced, but may also apply to future fuel types. We’ve designed a product that can easily be adapted for any future eventualities. I call it a ‘future-proof’ engine.”

The work to develop the new Wärtsilä 31 started back in 2010. Wärtsilä’s engineers set out to create an engine platform with a high level of commonality between the three engine variants.

“The three engines are almost identical,” says Giulio Tirelli. “A technician who’s been trained on one will find it very easy to operate the other two, while owners with more than one engine type will reduce spare parts stocks, thanks to high commonality of parts. In addition, an engine that was initially bought to operate on, say, diesel, can easily be adapted to become a gas or dual-fuel engine if the customer’s requirements change over the course of the product lifetime.”

“Due to the modular design and use of common technologies on the different variants, the engine can be converted from one variant to another with only minor mechanical changes,” adds Åstrand. “This makes it a reliable choice for the future irrespective of changes in fuel availability or potential major fluctuations in fuel prices.”

Energy efficiency. Consumes on average 8–10g/kWh less fuel compared with the closest competitor across its entire load range, giving daily savings of up to EUR 10,000.

Cost efficiency. Maintenance costs have been reduced by approximately 20%.

Operational flexibility. Fully operational, everywhere. The dual-fuel engine enables an easy swith to gas when entering a Tier III area without any change in speed. The Wärtsilä 31 can easily be adapted for different operating profiles and any future eventualities.