Medium-speed combustion engines have the highest efficiencies of all simple cycle solutions, can run on clean fuels, and their flexibility is unmatched. While they have different applications, from big baseload plants to local power plants, to small combined heat and power plants, there are situations, where these cannot be used. The new Wärtsilä Modular Block can change that. See how.

Medium-speed combustion engines have the highest efficiencies of all simple cycle solutions, can run on clean fuels, and their flexibility is unmatched. While they have different applications, from big baseload plants to local power plants, to small combined heat and power plants, there are situations, where these cannot be used. The new Wärtsilä Modular Block can change that. See how.

Generally, two classes of reciprocating engines are used in the modern power industry: high-speed and medium-speed. The high-speed engines, typically 1500 or 1800 rpm (for 50 and 60 Hz systems respectively), have simpler designs. They are smaller, lighter, also somewhat less expensive per unit output. On the other hand, the medium-speed engines (most typically 750/720 rpm, although there are designs with speeds like 1000 rpm or 500 rpm), are heavy duty machines characterised by considerably better efficiencies, better dynamic performance, lower maintenance costs per unit of produced energy, and considerably longer service life. This comes at a higher investment cost and generally heavier and bulkier design.

Medium-speed engines are also larger in terms of single-engine output as it is not feasible to build small engines of this class. Typically, the vast majority of commercially available engines below 5 MW of output are high-speed designs, while those above 5 MW are medium-speed units. All Wärtsilä engines, for instance, currently offered for the energy market are medium-speed designs. 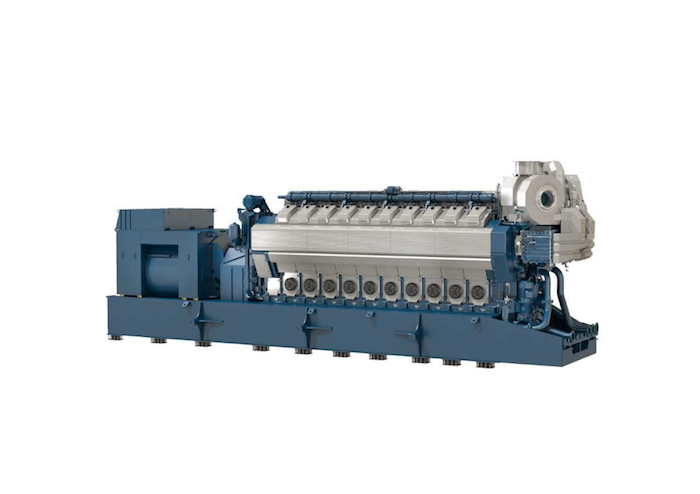 Because of all these factors, medium-speed engines are typically used in larger commercial and industrial power plants, while really small facilities, for which medium-speed technology is not available, have to rely on less efficient high-speed technology. There are also some applications, where both technologies may be a good solution, and the choice there depends on a project’s specific requirements. There are, however, also situations, where a project could greatly benefit from medium-speed technology, but its deployment proves too complicated, forcing investors to satisfy themselves with the less efficient option. This is because of the physical properties of medium-speed engines: they are relatively large and heavy.

So far, the main method of installing the medium-speed engines involved building a solid power house around them: quite a simple structure compared to other power generation technologies but nonetheless requiring a considerable amount of engineering and time. In the case of commercial power generation projects, this typically does not matter, as an engine power plant construction times are still much shorter than in case of other technologies. But there are applications, where this need to build a solid power plant around the engines may prove prohibitive. Those can, for example, be facilities such as data centres or some industrial plants, where adopting a custom-designed power plant concept would require extending the construction time of the whole facility beyond acceptable limits. There are also situations, where power generation is only needed for a limited time, for example, several years, and then assets need to be relocated.

Finally, there can be situations, where for a variety of reasons, it is desirable to minimise the amount and duration of on-site works, due to the cost of local labour, scarcity of qualified workers or security concerns. All these may lead to a preference for inferior high-speed engine technology only because it can come to sites in an easy-to-install, containerised form. 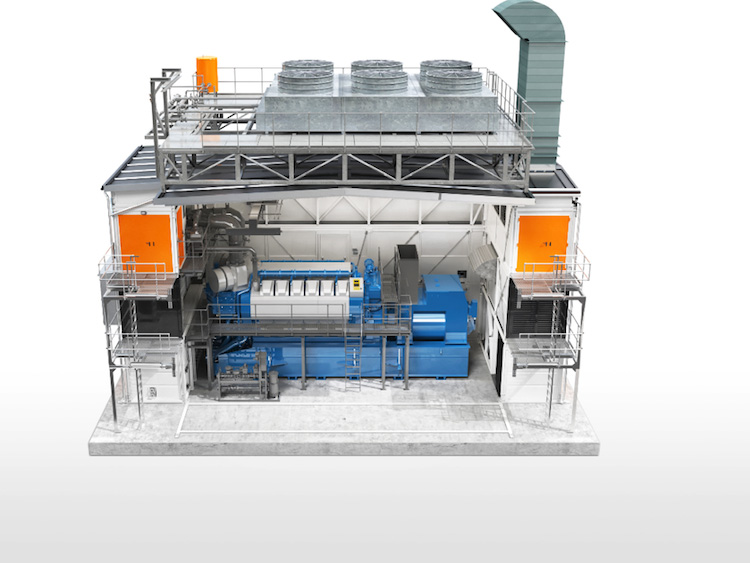 Figure 2. A view inside a Wärtsilä Modular Block with a Wärtsilä 12V34SG engine. The engine-generator set is connected to auxiliary systems contained in the modules forming walls of the enclosure. Note the maintenance platforms and ladders, providing access to all components as needed for maintenance. The cooling radiators are installed on top of the Wärtsilä Modular Block, creating a fully closed engine cooling system, requiring no water supply.

Wärtsilä has been facilitating the installation of medium-speed engine power plants for many years. This has led to standardised general power plant designs, standardised auxiliary modules and equipment, layouts etc. This enabled very competitive delivery times even for large power plants. However, the need for building a structure around all this equipment, and the associated costs and time, still proved to be a challenge. The new Wärtsilä Modular Block is a way to overcome that barrier.

It is a fact that it is not possible to install a high-efficiency generating set inside any form of transportable one-piece enclosure – it is simply too big for that. In the Wärtsilä Modular Block, nearly all auxiliaries needed to operate a generating set, are placed inside box-shaped modules already at the production facility. Modules are then transported to the site with the generating set, and stacked around it, thus forming a modular enclosure.

The individual modules of the Wärtsilä Modular Block have a dual role: they are ‘process’ modules containing process equipment, such as compressors, heat exchangers, valves, fans, air filters, pipelines, cables etc., and elements of a weather-proof enclosure. Once on site, the modules are set and connected with simple bolted joints, with no welding required. The amount of on-site works is therefore considerably limited. It is only necessary to prepare a simple concrete foundation (the generating set’s base frame is designed in such a way that it does not transfer any dynamic loads), with ducts for cabling, and embed in it a special positioning frame, which is a part of the Wärtsilä Modular Block delivery, and to which all other modules are later bolted. Then the actual modules are delivered as containerised cargo. Three modular walls are set up using three ‘module layers’ each, and then covered with a prefabricated modular roof, also supplied in containers.

After this partial structure is completed, the generating set is slid into the created chamber, and connected to auxiliary systems, and finally, the fourth wall is built, closing the module. Certain external systems still need to be attached, most noticeably a short exhaust duct with a stack, and fuel supply system (gas pipeline). The generator needs to be connected to an external medium voltage switchgear providing power off-take; this switchgear may be delivered as a prefabricated containerised unit. The Wärtsilä Modular Block can be used to build both a single-engine facility and a multi-engine power plant: further engines may be added with further extension blocks alongside the first one (as shown in Figure 3). In such a case, each new engine only gets three new modular walls and shares the fourth one with the previous unit, which reduces the cost and footprint of a multi-engine plant.

A multi-engine plant may be built in stages, and further modules may be added when the previous ones are already in operation, as all the auxiliary systems needed for the operation of the engine are engine-specific. It is worth emphasising, that while the Wärtsilä Modular Block is a completely new design, in process engineering terms it follows the same general designs as standard Wärtsilä modules used in other power plants – they are simply spatially rearranged to fit the limited space of the modules. This means, that although it is a new product, it relies on years of experience with proven process designs. 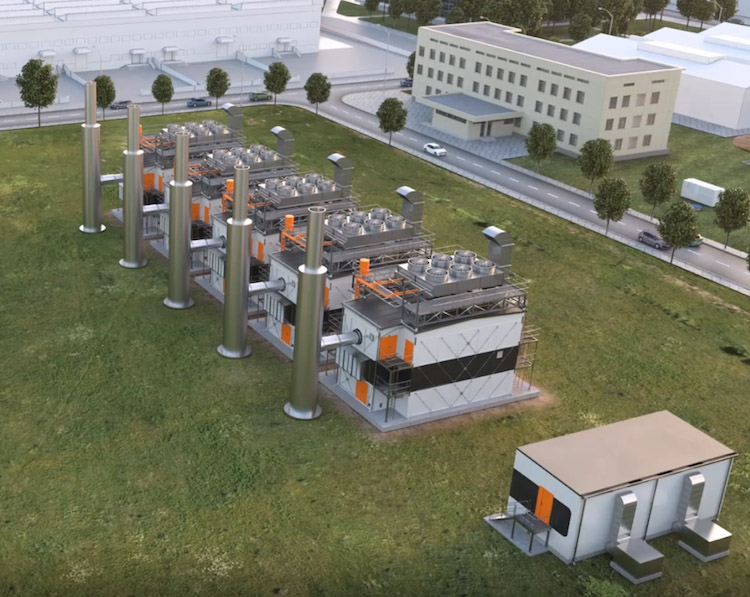 Figure 3. A site with five Wärtsilä Modular Block Compact units, each with a Wärtsilä 12V34SG engine. All units are connected and share their middle walls but remain functionally independent. The stand-alone building in the lower-right corner is a medium voltage switchgear building used as a point of interconnection between the generating sets and the public power grid.

While the exact amount of time required will invariably change depending on site conditions, labour laws, the number of personnel (shifts) involved, and other local constraints, the assembly of a complete Wärtsilä Modular Block, excluding the foundation construction, may be accomplished within around five weeks. It also does not require specialised equipment with a relatively simple crane being all the heavy machinery that is needed.

Despite being very compact, the Wärtsilä Modular Block is designed to ensure easy maintenance of the engine. Personnel access is provided to all components which require human intervention at any stage of a plant’s lifetime. As is standard in other Wärtsilä power plants, the engine and generator remain within the block during operation and are never removed from the site for maintenance – only engine components are replaced or transported to a local Wärtsilä service workshop for reconditioning, as prescribed by the engine maintenance manuals. Each engine cell is also provided with an overhead travelling crane with the capacity sufficient to lift all engine components which might require replacement during overhauls. Doors and laydown areas are provided, so it is not necessary to dismantle the enclosure for scheduled maintenance. Dismantling is, however, perfectly possible, in case the owner likes to relocate (or sell) the plant at some point in the future.

This makes the Wärtsilä Modular Block a good product for medium and long-term rental; after dismantling all the components, except for the concrete foundation, it may be transported to another site and reassembled.

The Wärtsilä 34SG is currently the most popular medium-speed gas engine in the world. It is characterised by very high efficiency, low environmental footprint, and ultimate flexibility. A standard engine of this type can reach full power from standstill in just two minutes, and a specialised version for data centres, which is compatible with the Wärtsilä Modular Block as well, can do so in less than one minute. Thanks to this feature, a Wärtsilä Modular Block can be used as a clean alternative to emergency diesel generators for critical infrastructure such as data centres, hospitals or airports.

Thanks to its clean fuel and low emissions, such a backup generating set can also be used for regular power supply – alone, together with the grid (generating power whenever grid electricity prices go up) or in conjunction with local renewable resources (firming up wind or solar power generation).

While the Wärtsilä Modular Block is a highly standardised prefabricated product, it nevertheless can be customised to a considerable extent, to meet requirements of a specific project. Customisation options include:

In its current form, the Wärtsilä Modular Block is designed for sites with ambient air temperatures from -25 to +40°C. The design follows relevant European (EN) standards for structures, and EU directives for pressure equipment and electrification. The modules are manufactured in the European Union.

With the Wärtsilä Modular Block, investors for whom simple, standardised and quick on-site installation process is critical, get access to the highly efficient medium-speed engine technology. This new innovative solution enables the construction of even bigger power plants with ease, with minimal amount of project-specific engineering.

This makes it an attractive option for various projects where high-speed engine technology with its inherent lower efficiency used to be the only possible solution. It may also be a cost-effective alternative to standard power plants with medium-speed engines in those locations, where site works are expensive, and reduction of installation time can bring cost savings to the entire project.