The key drivers of energy trends are decarbonisation, innovation and extreme weather, believes Christoph Frei from the World Energy Council.

The key drivers of energy trends are decarbonisation, innovation and extreme weather, believes Christoph Frei from the World Energy Council.

The world is undergoing a grand energy transition. Energy experts gathered in Helsinki, Finland at the Nordic Energy Forum to discuss what is happening in the world today and how we can meet our energy and climate goals. Christoph Frei, secretary general of the World Energy Council, began the event by speaking about global energy trends.

“We see three possible scenarios,” Frei says. “The first is what we call the jazz scenario. This is an environment driven by the market and consumers, who demand cheap and abundant energy. This is mainly driven by trade agreements.”

“Originally, we only had two scenarios, but then we realised something else was happening,” Frei continues. “We call this the hard rock scenario. It is driven by fragmented, local policies. Examples of this are Brexit and the US withdrawing from the Paris climate agreement.”

The idea of the nations of the world fragmenting and each going their own way, as in the hard rock scenario, may seem almost dystopian. Will we be able to arrest man-made climate change if this is the direction the world is heading?

“Actually, I see more of the jazz scenario, along with a bit of symphony thanks to the Paris agreement,” Frei says. “Many people were very worried about the US withdrawal from the Paris climate agreement, but interestingly we have seen a counterbalance. American cities and states have pledged to uphold the agreement, even when the federal government wants to withdraw.” 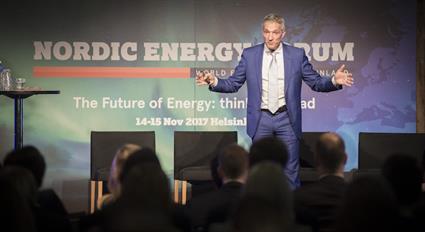 The drivers of change

“We are not doing enough for decarbonisation,” Frei admits. “Our current carbon capture and storage efforts are not good enough to meet the global goal of limiting the world’s temperature increase to 2 degrees.”

While our work towards decarbonisation is insufficient, Frei is much happier with the innovations he is seeing. He cites several examples which make him optimistic.

“Solar is expanding rapidly and costs are plummeting,” he says. “Also, think of the possibilities of smart homes. They can turn off your refrigerator for one hour in the middle of the night, as long as the temperature remains in a specified safe range. This would save enormous amounts of energy.”

Another key driver in global energy trends is the risk of extreme weather events. Both the frequency and severity of extreme events are increasing. Puerto Rico’s energy grid was badly damaged by Hurricane Maria in a disquieting omen of what our future might hold.

“One way to approach this is to think of how nature responds to extreme events,” Frei says. “An oak is very rigid and strong, but it can snap in high winds. On the other hand, a reed is supple and can bend in the wind. We need a similar approach. Locally empowered and resilient infrastructure can be flexible enough to handle these new risks.”

The conclusion Frei draws is that the world is in a grand energy transition. We are facing a profoundly different world than what we envisaged just a few years ago. While there are many reasons for concern, he remains optimistic.

“History shows that we are continually taking steps towards our goal,” Frei says. “One thing I am optimistic about is our technology. We have underestimated the power of technology, the power of our ingenuity. Look at solar. We deeply underestimated how big solar could get. I am confident we will unleash even more new solutions.”