The evolution of wireless charging

Power cords may soon be a thing of the past. Everything from mobile phones to coastal ferries can be charged using wireless charging systems. Find out why this could be a game changer.

Power cords may soon be a thing of the past. Everything from mobile phones to coastal ferries can be charged using wireless charging systems. Find out why this could be a game changer.

For our lives to work, our devices and technologies must be inexorably tethered to unsightly electrical umbilical cords. Obtrusive and expensive, these power cords are heavy tangled messes – think phone chargers tucked into backpacks, bulky cables for charging electrical vehicles, overhead power lines for a tram. In whatever form, many claim they are the bane of our modern existence.

Going wireless is a natural evolution. We already have wireless routers, headsets and gaming consoles, not to mention driverless cars, but these remain tethered to a power source – a battery or a home base station. What about charging the battery wirelessly?

According to Boulder, Colorado-based Navigant Research, formerly Pike Research, a market research and consulting firm that provides in-depth analysis of global clean technology markets, the global wireless charging market (charging a device by proximity instead of a cable) could hit USD 11.8 billion by 2020. This of course includes the burgeoning market for wirelessly charging smartphones by simply placing them on a pad.

“How many power cords have you had in your lifetime?” he asks. “They are often unique, incompatible and fast become obsolete gathering dust in a drawer. A strong driving force across many industries is to implement some kind of standard, and even do away with power cords altogether.” 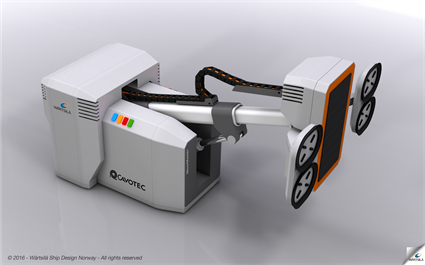 For Wärtsilä, this wireless charging revolution focuses on coastal ferries, a segment of the transportation industry which is well-suited to the technology because of short stop-and-go schedules.

Sørfonn is the chief architect of Wärtsilä’s wireless induction charging effort which is just now seeing the light of day after several years of prototyping on a ro-ro ferry in Norway.

The hope of course is that this innovative Wärtsilä case, including a few patent-pending solutions, will help standardize the market creating norms and best practices across the coastal ferry industry, which right now is still concentrated in Norway.

The specifics: Folgefonn is a double-ended, 85-metre-long, ro-ro hybrid-powered passenger ferry servicing Jektevik-Hodnanes, Norway. It carries 76 cars and 300 passengers and is owned by Norled, which operates 45 car ferries across Norway.

Folgefonn was built as a diesel powered ferry in 1998 and retrofitted into a hybrid diesel/electric vessel in 2014. According to Sørfonn, other hybrid-powered ferries in Norway are looking at shore-based wireless induction charging solutions primarily to increase and optimise their usage of renewables. Safety reasons also play an important role.

In practice, this means that a hybrid-powered ferry like the Folgefonn can dock for a few minutes at a time and get a charge without plugging in fat electrical cables, a challenging task in harsh Norwegian seas. On the Folgefonn, the charging plates are about two square-metres in size and send an electrical charge without physically touching, at a distance of 40-50 centimetres. The physical stability of the ferry is accomplished by an innovative vacuum-mooring system developed by Cavotec. 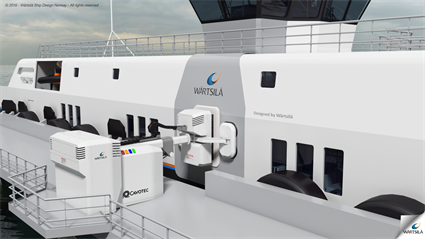 Vacuum pads connect the charging station to the vessel.

A matter of scale

But wireless induction technology isn’t new per se and dates back to the days of Michael Faraday and Nicholas Tesla. What is new is scaling it up to dimensions big enough to power a ship.

Wireless charging makes inherent sense in many industries, and in the coastal ferry market in particular. But there remain many obstacles to its widespread adoption. One is the standardization of the technology and its integration into new ship builds.

“Since the introduction of the technology, there has been interest from many market areas and industries such as road vehicles, military applications and demanding transfer applications where time restrictions and safety aspects are dominant”, explains Sørfonn.

“The focus area for us was coastal ferries, where new contract demands require strict targets for use of energy and release of climate gases. This is a new trend in this market segment and is driven by regulatory demands, political visions and incentives, and a more sustainable way of running this business.”

The evolution has begun.