Using ships as floating warehouses, tug boats as charging vessels, and creating a maritime emissions credit currency were just some of the radical ideas to come out of an open innovation session held by Wärtsilä, in April, in Norway.

Using ships as floating warehouses, tug boats as charging vessels, and creating a maritime emissions credit currency were just some of the radical ideas to come out of an open innovation session held by Wärtsilä, in April, in Norway.

Ever since the dawn of the industrial revolution, technology-led innovation has had a dramatic effect on how we do business. Today, connected technologies are rapidly accelerating the pace of change, and nowhere can this be seen more than in the maritime industry.

But as vessels change, so will service as we move towards a smart marine ecosystem. At the recent Future Innovation Day held by Wärtsilä in Norway, attendees put their heads together to look at what services of the future might look like, and how we can get there.

The question posed was simple. How can Wärtsilä use and leverage an intelligent, digital layer above marine operations to help its customers, and their customers? While the likes of artificial intelligence, augmented reality, and blockchain-enabled smart contracts could change business as we know it, Wärtsilä’s customers are in the business of transportation, not technology.

Melvin Mathews, Wärtsilä Services 4.0 Director of New Businesses, was happy with the results of the workshop, particularly the concept of using ships as floating warehouses. “Instead of having centralised warehouses, we could take advantage of ships that are travelling all around the world, most of which have spare capacity on board and in their storerooms,” he says.

The team developed the idea further, considering the potential business model and trust issues among competitors. “Each vessel wouldn’t need to carry unnecessary extra sets of spares. This is already being undertaken by some prudent ship operators, where spares are distributed and shared between similar ship types, but why shouldn’t this be opened up across companies to benefit all?” asks Mathews.

For everyone were to benefit from lower costs, it would mean trusting the competition, and the team felt this would mean time spent educating the industry about the possibilities with such cross-industry cooperation. 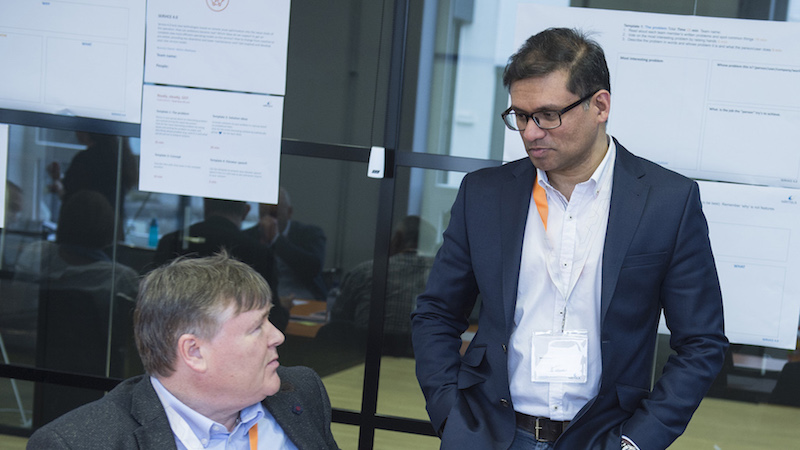 Melvin Mathews (right), Wärtsilä Services 4.0 Director of New Businesses, was happy with the results  of the workshop.

The importance of radical ideas

Other ideas generated during the workshop ranged from tweaks on existing technology – such as tug boats acting as charging vessels – to more radical ideas such as launching an emission credit currency. “I love these radical ideas as regardless of the feasibility of any one idea, it gets people thinking in the right way by challenging the status quo. It’s only ideas like these that will truly change the industry,” says Mathews.

Wärtsilä’s Vice President of Services for North Europe Tamara de Gruyter says she was intrigued with the discussions around future business models. “Today we do maintenance, which means spare parts and people on board, but as we move towards a service-oriented industry, optimisation becomes more important,” she says.

“There will always be a need for maintenance, but as that maintenance becomes ever more intelligent, it opens up a whole new set of potential business models,” says de Gruyter, who added that such was the success of the day, Wärtsilä will look to replicate the workshop model in other markets.