Celebrating its 50th anniversary this year, the Golden Globe sailing race will see contestants spending almost 300 days alone at sea, limited to similar yachts and equipment to what was available in the original race.

Celebrating its 50th anniversary this year, the Golden Globe sailing race will see contestants spending almost 300 days alone at sea, limited to similar yachts and equipment to what was available in the original race.

The Golden Globe Race, one of the world’s most gruelling sailing events, has only been held once before, in 1968. It was the first ever attempt to sail around the world single-handed, non-stop. Out of the nine sailors that started the race, Sir Robin Knox-Johnston was the only entrant to complete the route and circumnavigate the world via the Great Capes. As the sole finisher, he was awarded both the Golden Globe trophy and the £5,000 prize for the fastest time.

In honour of Knox-Johnston’s achievement, 18 skippers set sail on 1 July from Les Sables-d’Olonne in France to replicate the legendary journey, among them Finland’s Tapio Lehtinen. Wärtsilä is the main partner on Lehtinen’s journey around the world. The partnership is closely linked with Wärtsilä’s global presence and commitment for a clean environment and the future of the seas.

Lehtinen says that taking part in the race has been a lifelong dream that was put aside, but now the timing and the nature of the race seemed perfect:

“I love sailing and enjoy being at sea. This time I will spend less time with computers at the navigation table and be more at one with nature. I’m looking forward to that,” he says. You can read more about his thoughts just before setting sail.

The 30,000-mile race course is an east-about circumnavigation, which will take the competitors down the Atlantic from North to South, passing four rendezvous gates along the way. The entrants may not enter port or receive any outside assistance at any time during the race.

One of the main goals of the organisers has been to set up a race that is truly open for any committed sailing enthusiast worldwide, regardless of age or experience. This year’s entrants represent 13 countries and an age range between 28 and 73. The youngest competitor, Britain’s Susie Goodall, is also the first female to take part, while the father figure of French solo sailing Jean-Luc van den Heede is already a 5-time circumnavigator. 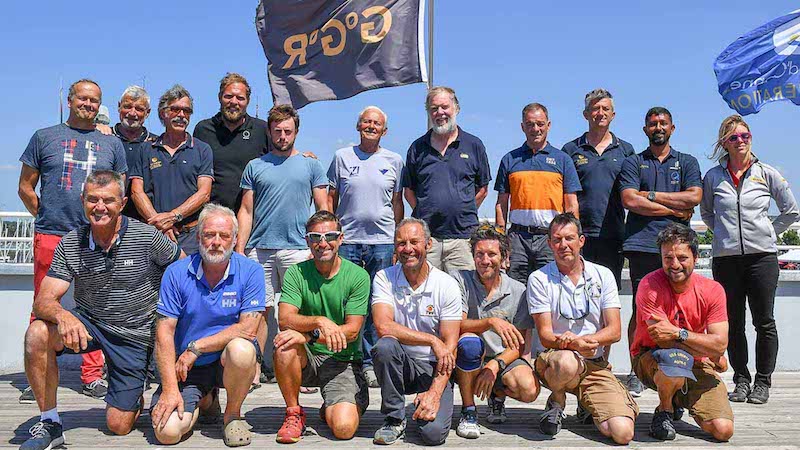 Since the idea of the race is to take the competitors back in time to the “Golden Age” of solo sailing, entrants can only use similar equipment that was carried on board Sir Robin’s yacht Suhaili. This means the skippers will be navigating with a sextant on paper charts, without electronic instruments or autopilots.

Although the participating vessels will be tracked 24/7 by satellite, the competitors will not be able to interrogate this information unless an emergency arises, and they break open their sealed safety box containing a GPS and satellite phone. In such a case, the entrant will be deemed to have retired from the race.

Competitors must sail in production boats of fibre reinforced plastic construction, between 32ft and 36ft overall (9.75 – 10.97m). They must have been designed prior to 1988 and have a full-length keel with rudder attached to their trailing edge. These yachts are heavily built, strong and sturdy, similar in concept to Sir Robin’s vessel. The Suhaili, now on display at the National Maritime Museum Cornwall in the UK, is a two-masted ketch built of teak, without any computers, GPS, satellite phone or water-maker.

In the spirit of the original race, the anniversary event intends to offer sailors an opportunity to rely on their skills and traditional seamanship alone, rather than modern technology or support crews.

The first Golden Globe Race quickly became legend due to its epic tales of human triumph and tragedy when facing the great oceans of the world. Besides Knox-Johnston, five sailors retired, and one man, Donald Crowhurst, reportedly took his own life. His story was portrayed in the recent film The Mercy, starring Colin Firth. Crowhurst sailed circles in the Atlantic Ocean and transmitted fake coordinates, hoping to fool the world, but ultimately suffered a mental breakdown.

Convinced that he was being closely chased by Crowhurst, skipper Nigel Tetley neglected the repairs needed on his slowly disintegrating vessel, The Victress, and continued to sail as hard as he could. With 1,200 nautical miles (2,200 km) left to go, Tetley’s boat broke up and sank, leaving him to be picked up in his life raft the following day.

As for the French entrant Bernard Moitessier, he achieved the fastest circumnavigation time towards the end of the competition with his yacht, Joshua, and was the likely winner for the fastest voyage, but chose to abandon the race. Moitessier rejected the idea of the commercialization of long distance sailing and decided not to return to the start line in England, but continued until he reached Tahiti, after circling the globe one and a half times.

The historic Golden Globe Race has since inspired countless adventurous seafarers and ultimately led to the founding of other popular round-the-world races, such as the BOC Challenge and Vendée Globe competitions. 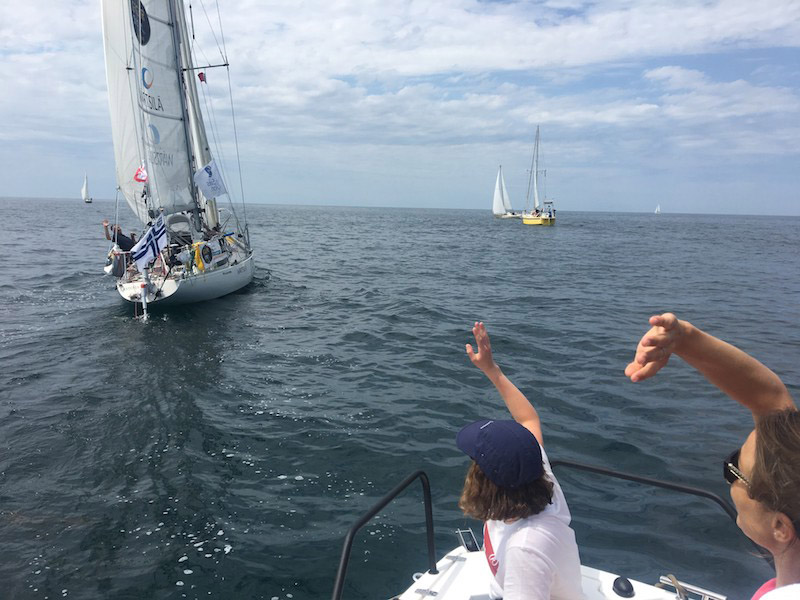 Wärtsilä is the main partner on Lehtinen’s journey around the world.

Message in a bottle

Although travelling alone, the entrants will not be completely cut off from the outside world. Competitors will be provided with a two-way satellite short text paging unit for 100-character text reports every 24 hours and satellite phones for weekly safety checks to race headquarters. According to race regulations, they are also free to speak to media, family, friends and sponsors by radio at any time during the event but must not be given any form of weather routing. However, communications between other competitors and vessels at sea are not restricted, though limited to radio or hailing.

The only stop during the race will take place when the vessels reach the rendezvous gate at Storm Bay in Tasmania. The entrants will drop sails and drift, or anchor for 90 minutes. Media, family and friends may then interview and chat without touching the entrants, films and letters can be passed off the boats, but nothing must go onto the vessels. After the break the contestants will continue to Cape Horn.

While Sir Robin took 312 days to complete the first solo non-stop circumnavigation, this time the winning yacht is expected to travel the same distance in 260 days. The official prize ceremony and dinner will be held on 22 April 2019; 50 years to the day that Knox-Johnston finished his voyage.

When the competitors return to Les Sables-d’Olonne next year, they will join the famed ranks of around 200 individuals that have so far sailed alone around Cape Horn and other Great Capes in the Southern Ocean.

Follow the race online via #GoldenGlobeRace and LiveTracker. Visit the official website of the Golden Globe Race for more details.

Wärtsilä is the main partner of Tapio Lehtinen as he participates in the historic Golden Globe Race 2018-2019 with his sailboat, the Asteria.

The Golden Globe Race started from Les Sables-d’Olonne, France on 1 July 2018 and is expected to last around 260 days. The historic race will see competitors sail solo across 30,000 miles around the world unassisted. Participants will return to Les Sables-d’Olonne in April 2019.

Lehtinen will travel around the world in his 1965 S&S Gaia 36 sailboat. As an experienced sailor, Lehtinen has circumnavigated the globe before – however this was with a crew of ten people some 30 years ago. This time, the 60-year-old from Helsinki will be sailing solo and without the benefit of modern technology.

As Lehtinen’s main partner, Wärtsilä, a global leader in smart technologies and complete lifecycle solutions for marine and energy markets, aims to raise awareness on the importance of improving and creating smart marine ecosystems and reaffirming the company’s commitment to a clean environment.

Over the past five decades, the shipping and marine industry have grown tremendously. As an established leader in the marine industry, Wärtsilä provides services and solutions for global commerce across the world’s seas and oceans. A clean maritime environment is an important common responsibility that affects all marine industry operators and stakeholders navigating the oceans today. Through this sponsorship, Wärtsilä’s values of energy, excellence, and excitement come together in the best possible way.

You can follow Tapio’s progress aboard the Asteria, both on the Wärtsilä website and social media throughout the race. Be sure to also check out the Tapio Lehtinen Sailing Facebook page.