Research vessel Polarstern is a true icon of the Arctic. Last year, Wärtsilä was commissioned to perform a retrofit project to keep Polarstern going full steam.

Research vessel Polarstern is a true icon of the Arctic. Last year, Wärtsilä was commissioned to perform a retrofit project to keep Polarstern going full steam.

Commissioned on 9 December 1982, the research vessel, Polarstern, has logged almost three million kilometres, while remaining one of the most advanced and versatile polar research ships in the world. In fact, Polarstern is described as the most important resource for German polar research as well as the flagship of the owner, the Alfred Wegener Institute.

Nevertheless, even legends need some upkeep from time-to-time. In 2017, Wärtsilä was commissioned to perform a retrofit project on Polarstern. The scope of the project included two sets of shaft generator systems, assembly of shaft generators inside the vessel, project management and construction engineering as well as delegation of commissioning team.

Nam Nguyen, Project Manager for Power Conversion Hamburg at Wärtsilä’s Shaft Generator Systems, says the project was planned in close contact with the customer in order to optimise the delivery time as well as shorten the commissioning phase. This meant, for instance, that small work packages were conducted while the vessel was at sea.

“During the first execution phase, we had an idea to build the system without 450/660VAC transformer. After intensive investigations, we decided to follow up on this idea,” Nguyen explains the origins of the project.

Within the next eight weeks the old system was removed from the vessel and the new system was installed and tested. “Furthermore, sea trials were performed with classification organisation DNVGL,” says Nguyen. After the sea trials, the training of the crew started in earnest.

According to Nguyen, the project was very much a team effort: there was, for starters, close cooperation and intensive internal communication between Wärtsilä’s Shaft Generator System and Cargo and Marine Service.

“There was mutual assistance between Shaft Generator System and Cargo and Marine Service during commissioning. We also received support from development department together with our vendor, which helped to improve the system,” he says, pointing out that building a system without the transformer required “all hands on deck” mentality.

“In fact, this was our very first 660V Direct Front End Converter Application for shaft generator without a transformer,” he says.

There were other challenges as well. The tight commissioning period and fixed delivery schedule meant that every step along the way needed to be planned and executed effectively.

“Despite the tight schedule, we still improved the system during project execution phase. Without the transformer, the system took a leap forward in energy efficiency and reduced the total weight of our whole system.”

Still, as the existing system was more than 30 years old – and the vessel type so specific – the Wärtsilä team certainly had to proceed very carefully throughout the retrofit. The new system had to be fitted to work seamlessly together with all the other systems on board.

Overcoming all obstacles, Wärtsilä’s team of experts finished the project on schedule. On 28 December 2017, the project Polarstern Retrofit Shaft Generator System was handed over to the owner.

Polarstern wasted no time in returning to those icy seas. The latest news from the vessel (in early March 2018) is that after a visit in Antarctica – checking in on permanent station Neumayer III and the penguins – the ship was heading north towards South America. 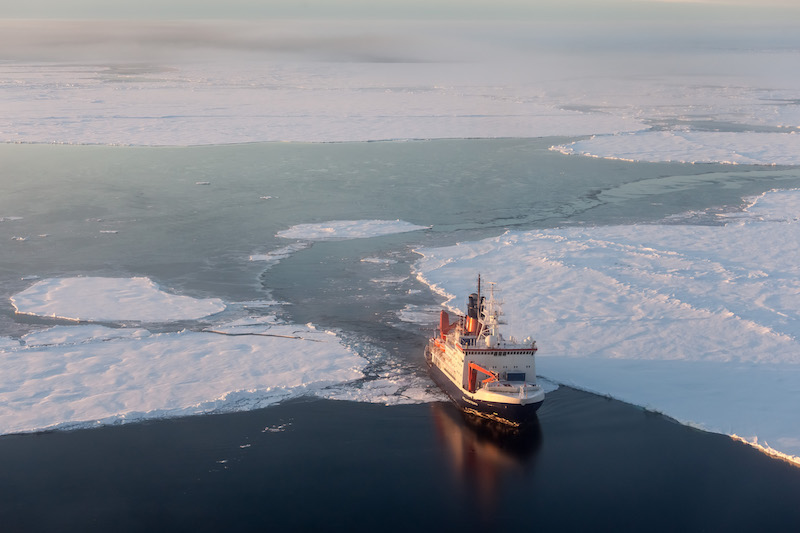 RV Polarstern operates an average of 310 days a year.

As it turns out, Polarstern is crucial to the very survival of Neumayer III station: if the ship doesn’t resupply the base – delivering everything from fresh vegetables to nuts and bolts needed for routine maintenance – the scientists at Neumayer III would have no choice but to pack it in and go home.

Wärtsilä’s retrofit project makes sure that Polarstern can keep making its polar rounds for many years to come. Before that, there was a major overhaul from 1999 to 2001 as the ship was refitted to implement the latest technologies available at the time.

RV Polarstern operates an average of 310 days a year. During a typical year, she cruises in the Antarctic from November to March and conducts research in the Arctic during the summer months. Every year, she covers ca. 50,000 nautical miles – the equivalent of two trips around the Equator.

The powerful research icebreaker can even operate in the pack ice zone: a double-walled steel hull and 20,000 HP allow her to easily break through 1.5-metre-thick ice; if the ice is thicker, she can resort to ramming. Furthermore, Polarstern is equipped to sustain operations at temperatures as low as -50° celsius.

In October 2008, Polarstern rose into a class of her own when she became the first research ship ever to travel through both the Northeast Passage and the Northwest Passage in one cruise, thus circumnavigating the North Pole. 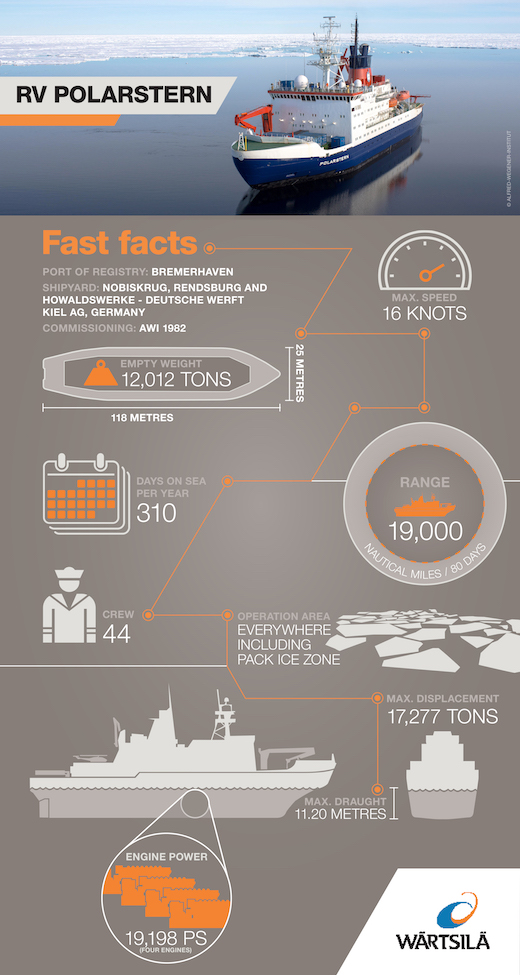