Propulsion Control on the Norwegian Gannet

November 2018 saw the launch of one of the world's most advanced sailing fish factories, the Norwegian Gannet, which features a state-of-the-art Wärtsilä propulsion control system among its many innovations. Here, the ship's chief engineer, Idar Vaulen of Hav Line AS, shares his initial experience of the equipment with Twentyfour7.

November 2018 saw the launch of one of the world's most advanced sailing fish factories, the Norwegian Gannet, which features a state-of-the-art Wärtsilä propulsion control system among its many innovations. Here, the ship's chief engineer, Idar Vaulen of Hav Line AS, shares his initial experience of the equipment with Twentyfour7.

When it comes to propulsion, there's not much that's conventional about the Gannet. The 90-metre ship makes history as the first salmon processing and transportation vessel in the world to use hybrid power, that is, a Wärtsilä 31 diesel main engine supported by an electric drive and batteries. The ship also uses a Wärtsilä two-speed gearbox that enables lower propeller speeds to optimise propulsion efficiency during transit, as well as a controllable pitch propeller, Sternguard sterntube seal and nozzle. Thus, the vessel, which is designed by Wärtsilä Ship Design, is geared up for a minimised environmental footprint, bringing both financial and environmental gains.

Tying this equipment together in an intelligent way is the job of the Wärtsilä Propulsion Control System (PCS). Its human interface, ProTouch, comprises a set of levers and touch screens designed for maximum ease of use.

“My first impression was that it looks very compact. The operating HMI (Human-Machine Interface) is approximately the size of an iPhone,” says Idar Vaulen of Hav Line AS, speaking shortly after the ship's maiden voyage from Spain to Denmark, where it will be put into service. Vaulen contrasted the small footprint of the PCS interface with others he has used, which sometimes take up 50 to 60 cm of valuable real estate on the console.

TheGannet uses the “extended” version of ProTouch which, in addition to the usual 4.3-inch operational display beside the 18 cm lever, also includes a 10-inch main display for supervision and control. Its PCS can in fact be operated from any one of four ProTouch stations on the ship – three positioned on the bridge and one in the engine control room. 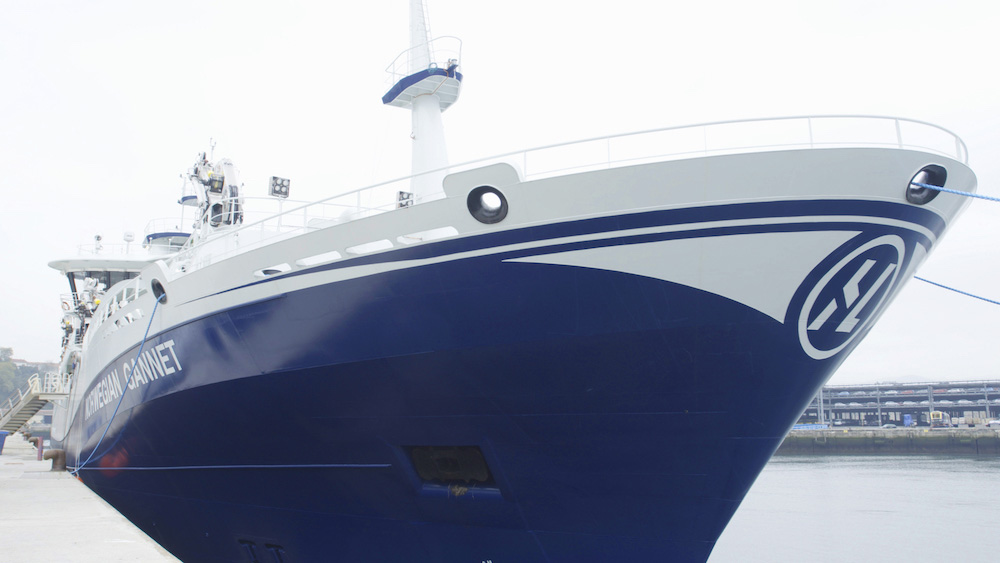 “You also operate it more or less like an iPhone, scrolling up down and sideways,” says Vaulen. “There are five different windows that tell us things like pitch, propeller revolutions per minute (RPM) and the load on the engine. Each window is clearly marked so you immediately know which one you are in.”

For Vaulen, the fact that the interface is entirely touchscreen-based and so intuitively designed is what sets it apart from any other PCS.

“I've been on systems where you have lots of push buttons and bulbs which you have to change from time to time. If you are an engineer and have months to learn the system, you can operate it, but for a new engineer on board, it is really a challenge to get to know how to run the system by pushing the buttons. You have to do it in a particular sequence or the system stops, maybe freezes, and you have to start over again,” he explains.

Another feature of the system Vaulen says he likes is that it can be used to control the main engine, if needed. “If you want to do a start-up from the ECR, for some reason you want to test something on the engine, you can do it on the Wärtsilä PCS, that's no problem.” 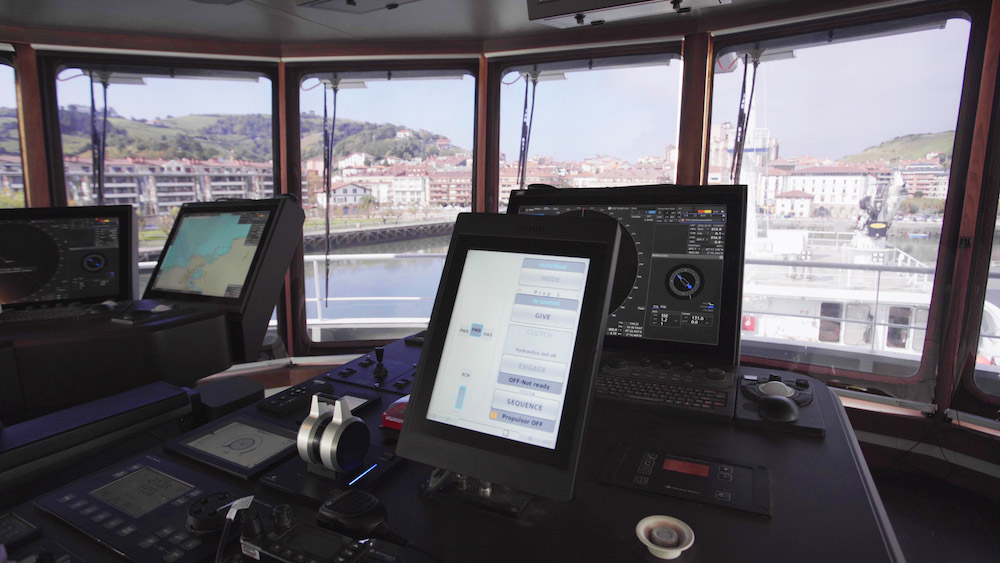 The Gannet uses the “extended” version of ProTouch which, in addition to the usual 4.3-inch operational display beside the 18 cm lever, also includes a 10-inch main display for supervision and control

Vaulen says he'd never experienced a two-speed gearbox before, but considering the Gannet's mission profile, he considers it an invaluable feature.

“This is a fish factory vessel. After we process the fresh salmon, we have to deliver it to the shore facilities as quickly as possible where it's packed in boxes and sent off by plane or truck. For that, we need the fast speed. If we have time on our hands, we can go slow and save a lot on fuel,” he says.

Either speed can be used in any of the four different sailing modes that are pre-programmed into the PCS: Diesel, PTI (power take-in), PTO (power take-off) and boost.

“In each mode there's a defined pitch and RPM curve in the system. You select the mode, and you get the curve that's designed for that mode,” explains Robert de Lange, Product Manager, Propulsion Controls at Wärtsilä.

“All the logic comes together in the side display. The operator can just select the mode and the system starts a semi-automatic sequence together with the power management system and clutches. The operator just has to confirm that he wants to engage a certain clutch and then he enters the mode,” de Lange explains.

Vaulen points out that whenever a mode is unavailable given the technical circumstances, it's greyed out on the display menu, which prevents the operator from selecting it by mistake.

“That's the beauty of the ProTouch,” says de Lange. “It guides the operator in what to do. There's no need for the operator to understand all the things that are happening. It's the system taking over.”

De Lange noted other factors that he believes make the Wärtsilä PCS a good choice. For one, installation at yards is made quick and easy thanks to the equipment being field-bus driven.

More than that, what helps is that it is one eco-system: the PCS system has a deep knowledge of the equipment it controls. In the case of the Gannet, that would include the abovementioned Wärtsilä 31 engine, Wärtsilä 2-speed gearbox and controllable pitch propeller. The Wärtsilä package also included generating sets and the Electric and Automation system.

“We have a PCS that understands all the components in our large product portfolio and we have knowledge of how ships are operated. That boosts the value proposition of our PCS,” de Lange says. 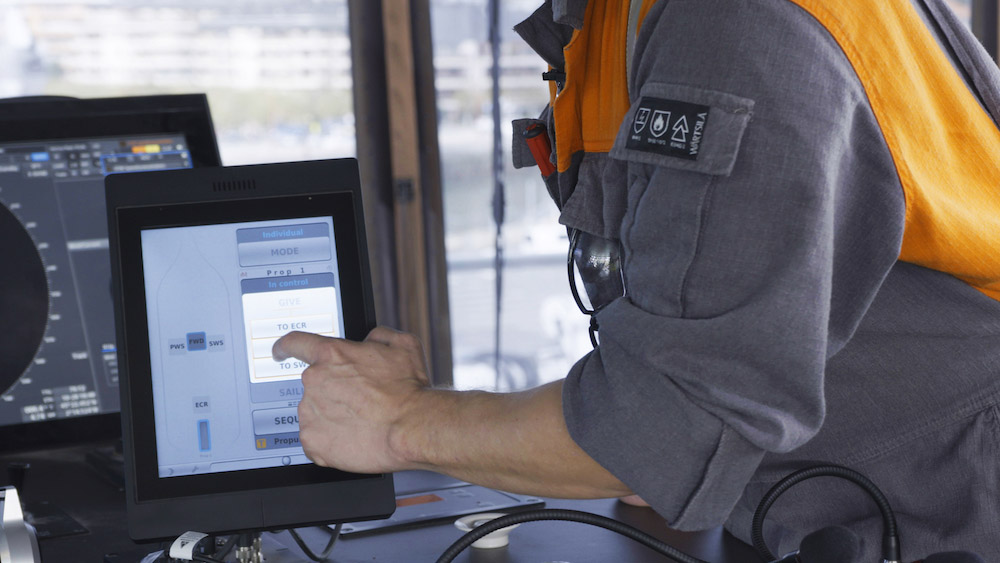 “A major concern for ship-owners, especially in these days of rapid technological development, is obsolescence. For this reason, Wärtsilä has a long-term strategy to support users of the PCS,” explains Martijn Rondeel, Superintendent at Wärtsilä Netherlands.

“Wärtsila is ensuring better lifecycle of hardware and software by guaranteeing 15 years of component availability,” he says. After that, the company can provide an updated PCS solution for the existing equipment.

“Maybe in 15 years, we'll have a new system that follows up on the ProTouch. We can take it out and deliver a completely new system to the client without having to change everything in the machinery.”

Rondeel touches on the subject in the video above, which was filmed aboard the Gannet during its sea trials. The video gives viewers a glimpse into the work of Wärtsilä service engineers and their commitment to ensure customer value through the lifecycle of the equipment.