Technology front-runner Eidesvik has become the first offshore services company to replace a gen-set with a hybrid energy system in an offshore supply vessel. The conversion takes just three weeks. To know more, read on.

Technology front-runner Eidesvik has become the first offshore services company to replace a gen-set with a hybrid energy system in an offshore supply vessel. The conversion takes just three weeks. To know more, read on.

Less than four weeks in the yard, a 15%-20% cut in annual fuel consumption, and engine-running hours reduced by a third. Few retrofits have results as dramatic as those Eidesvik Offshore expects from the Wärtsilä containerised hybrid energy storage solution it installed this autumn.

Wärtsilä replaced one of four LNG dual-fuel engines on the Viking Princess offshore supply vessel with a battery pack – altering the vessel’s engine and power system so it more or less functions like a hybrid car.

“When the vessel climbs a wave the battery will support the additional energy needed so the engines can run on a stable optimal load – and when the vessel falls off a wave it will gain power surplus, returning surplus energy back to the batteries,” explains  Sindre Utne, Manager, Projects & Operations, for Wärtsilä Services. “It's the same principle as with electrical vehicles: when they run down hills, it will charge up the batteries.”

When the vessel is travelling, the battery provides top-up power to meet load peaks, allowing the dual-fuel engines to hum along at maximum engine efficiency, producing the lowest possible emissions and consuming the least fuel.

When it is using dynamic positioning near a rig, the battery works in combination with one engine, always carrying sufficient charge to take the vessel to a safe zone should the engine fail. When in harbour the vessel aims for maximum usage of batteries as sole power source, reducing emissions and noise to a minimum. 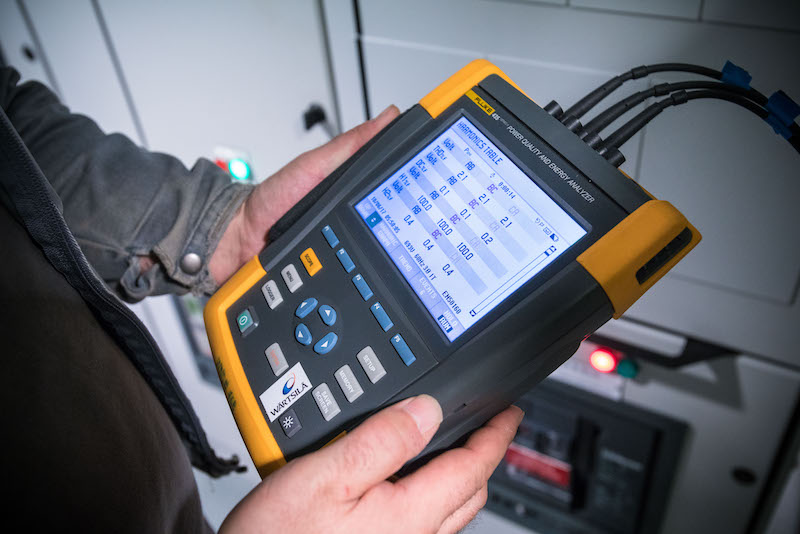 But that's not what makes the installation unique. The Norwegian vessel is the first ever offshore supply vessel in which batteries have replaced a generator, which in this case had malfunctioned.

“What's really special in this one is that we are replacing an existing four-stroke engine gen-set,” says Tore Markhus, GM, Wärtsilä Electrical and Automation Services. “We are removing one engine and replacing it with a battery energy storage system.”

The project is the latest fruit of the long technological collaboration Wärtsilä began with Eidesvik in 2003 when its ship Viking Energy became the first offshore supply vessel powered by LNG, and again in 2012 when the Viking Lady became the first OSV to have a hybrid energy system.

“Eidesvik has always been a front-runner ship owner,” says Giulio Tirelli, Director of Marine Engineering for Wärtsilä Marine Solutions. “In 2003, they started pioneering LNG, now they are one of the first pioneers of hybrid systems in the marine business.” 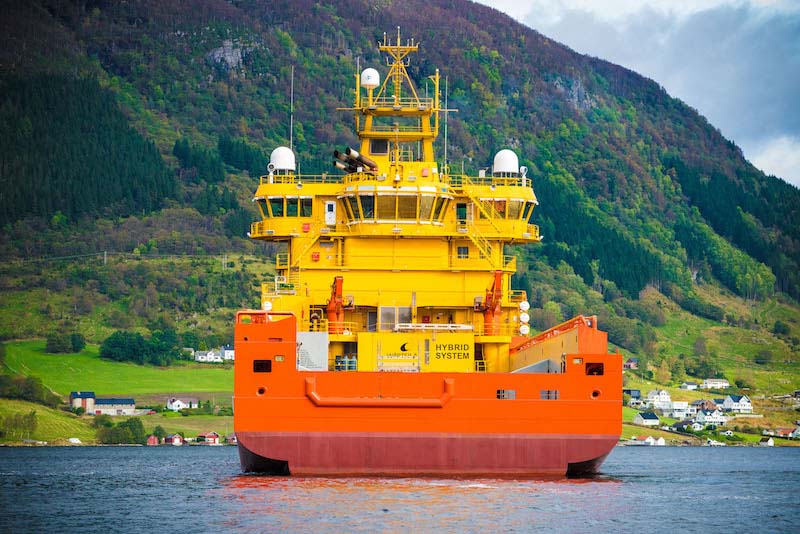 Wärtsilä replaced one of four LNG dual-fuel engines on the Viking Princess offshore supply vessel with  a battery pack.

Wärtsilä is also now in process of installing a hybrid energy system on the North Sea Giant, a construction vessel owned by North Sea Shipping – this time installing the system in the vessel’s engine room, rather than in a container on deck.

Tirelli says the current level of interest from ship owners in hybrid solutions is remarkable.

“The hype on the hybrid business is booming, both on new building and the retrofit business, the interest is getting bigger and bigger,” he says. “I’m today working, I would say, 50% to 80% on hybrid projects.”

Most of this centres around the Wärtsilä HY power module.

The advantage of integrating the system, as is being done with North Sea Giant is that all the equipment is kept in one place. But the containerised hybrid energy system is integrated with Wärtsilä’s Integrated Automation System, so crew can control and monitor it from the same screen.

The containerised solution is also quicker to install, reducing the time the vessel is unavailable for charter. Crucially for compact OSVs, it does not require space to be found for equipment below deck. And it makes it easier to switch to new technologies in the future.

Wärtsilä has worked closely with the class society DNV GL to develop the specifications which would allow an offshore vessel to replace a generator with a battery system while still being classed as a DP2 vessel, which means its dynamic positioning system can be powered by two independent sets of generators.

“We are treating this battery system as we would with any other traditional engine gen-set, so we have the same tests that we need to do, and need to show to the class,” Markhus explains.

According to Markhus, there has been strong interest from vessel owners since Wärtsilä and Eidesvik announced the completion of the Viking Princess’ conversion in October 2017. Most serve the offshore oil industry, but others operate ferries, cruise, and fishing vessels.

“On the offshore side, we are of course in a market that is struggling, but we see that for some of the charts that are out for grabs these days, it's a clear requirement that it should be a vessel with a battery hybrid solution, so if they want to win those charts, they have to have vessels with this technology on board.”

Tirelli expects Wärtsilä to become the leading supplier in the marine hybrid business.

“The distinctive point that Wärtsilä has in the business is given by the fact that we have the knowledge and the capacity, in house, in both the engine and the electrical automation side. That we have these capabilities combined is something unique in the market to benefit the customers.”