Kenya’s power market is at a point of big change. The country aims to have universal access to energy by 2020 even though nearly 30% of its population still has no access to electricity. Is this bold target the start of an energy revolution?

East Africa’s largest economy, Kenya, is quite literally in the midst of a power tussle between consumers and Kenya Power, the country’s sole electricity distributor. Consumers have been upset over rising electricity prices and the state has stepped in to take control of the situation via a tariff review process that resulted in an eight percent drop in electricity prices in bills since July this year.

Recently, the Electricity Regulatory Commission (ERC) Chief Executive, Pavel Oimeke told the Parliament that they are working jointly with Kenya Power to ensure that future tariffs are predictable and consumers are not charged for any fixed costs when they do not consume power.

The ERC has also proposed a new energy bill to license new companies to sell power.

This would mean Kenya Power may soon see its monopoly coming to an end. While the legislation is still pending presidential approval, it will take away Kenya Power’s absolute control over the dispatch centre and ensure that different energy sources feed the national grid.

According to a World Bank report released in May this year, Kenya’s energy access rate is growing at the fastest pace in all of East Africa. Increasing private participation will help enhance this further. It is estimated that the new bill has the potential to reduce electricity tariffs from the current US 17 cents per unit of electricity to as little as US 7 cents per unit.

“Kenya is advantageously positioned because it opened up its power sector to private producers, way back in the mid-90s. It has abundant resources, credit worthy power agreements, and a good track record. But transmission and distribution networks are old and weak. The new energy bill, if passed, will change that and make the market more competitive and efficient,” explains George Oywer, Business Development Manager, Wärtsilä Energy Solutions.

Wärtsilä has been part of Kenya’s energy story since 1997. Its installed base of 442 MW account for nearly 18% of the country’s total installed base of 2.36 GW. The company has installed plants in the region for a variety of needs including baseload power generation, grid stability and peaking and industrial self-generation. Its hybrid, flexible, efficient and environmentally advanced energy solutions are enabling Kenya’s power market to become more sustainable and environment friendly.

Some well-known installations by Wärtsilä include 116 MW for Kip III of Kenya Electricity Generating Co, 80 MW for Gulf Power, 80 MW for Rabai Power 80 MW and 55 MW for Iber Africa.

“We are working actively on a number of solar projects in the country and hope for success in the near future,” says Joost Bos, Business Development Manager, Wärtsilä Energy Solutions. 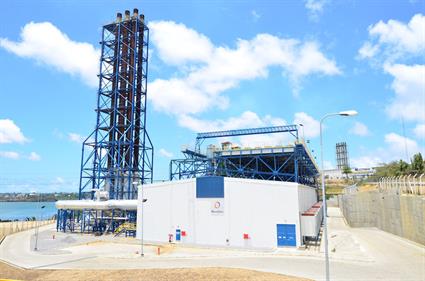 According to Ministry of Energy and Petroleum in Kenya, by 2030, the country’s projected annual demand for electricity will grow to 15 GW and its installed capacity will rise to 19.2 GW. To meet this rising demand, Kenya, like many other African nations is now working on changing its power mix and reducing its dependence on hydropower because of its unreliability due to drought-like conditions and climate change.

Currently, hydropower accounts for the 36% or the largest share of power generation in Kenya followed by thermal power (31%), geothermal power (28%) and other renewables (5%).

The country’s new capacity growth is projected to come from renewable energy such as solar and wind, geothermal, LNG and other indigenous fuel sources like coal, oil & biomass. Investors from Japan, Germany, South Africa, Luxembourg, France, UK, China and US seem to agree. They have reportedly put in close to USD 3 billion as foreign direct investment in geothermal and clean energy projects in the past eight years. If this huge investor interest is anything to go by, then it does look like Kenya is well on its way to achieving its ambitious target of universal energy accessibility by 2030.