About 85% of marine litter is plastic debris. To deal with this heap of a problem, some African nations have waged war against plastic. Erik Solheim, head of United Nations Environment, tells Twentyfour7. what other countries can do to follow suit.

About 85% of marine litter is plastic debris. To deal with this heap of a problem, some African nations have waged war against plastic. Erik Solheim, head of United Nations Environment, tells Twentyfour7. what other countries can do to follow suit.

Early this year, a rare Cuvier’s beaked whale beached on the Norwegian shore. Despite repeated attempts to rescue it, the distressed whale had to be put down. On examination, zoologists found more than 30 plastic bags in its stomach. But this wasn’t a one-off case.

A recent report by United Nations Environment states that plastic pollution is threatening at least 600 different species of marine wildlife. While one in three leatherback turtles consume plastic mistaking it for jellyfish, almost 90% of seabirds end up eating plastic when they reach out for food. This is because more than eight million tonnes of plastic - equal to dumping a garbage truck of plastic every minute - end up in the oceans, each year. No prizes for guessing that this litter problem is taking a toll on the marine ecosystem.

“The oceans are getting more and more sick,” says Erik Solheim, Executive Director, United Nations Environment Programme. “It is estimated that by 2050 the weight of plastic in the ocean will be the same as fish.”

While many countries are waking up, only recently, to this alarming reality, some African nations have marched ahead to nip the problem in the bud. Rwanda banned plastic bags in 2008. Its law prohibits the manufacture, use, import, and sale of plastic bags.

“Rwanda has shown the way in Africa. Historically, Rwandans are known for maintaining clean homes, clean gardens. The idea was to bring this sense of cleanliness to the common areas,” Solheim explains.

Rwanda set the ball rolling for other African countries. While Mauritania imposed a ban in 2013, saying an estimated 70% of cattle and sheep in the capital were dying from ingesting them, Senegal’s National Assembly followed suit in 2015. Uganda, Cameroon, Guinea-Bissau, Mali, Tanzania, Ethiopia and Malawi are other African nations that have introduced some form of restriction on the use of plastic bags if not entirely ban them.

Kenya is now the latest African country to do the same. This is the country’s third attempt to impose the ban, following two unsuccessful attempts in 2007 and 2011, respectively.

By one estimate, quoted in the Economist, Kenyans use 24m bags a month, or two per person (Americans, by comparison, use roughly three per person) and between 2010 and 2014 annual plastic production in Kenya expanded by a third, to 400,000 tonnes. This coupled with the absence of an efficient waste management system in the country (like in most developing nations) speaks volumes about why the country’s move is significant.

Will Kenya be third time lucky?
“Kenya is a lot bigger so it may be more complicated. But if political will is mobilised, which I believe it is, Kenya can do it,” predicts Solheim. 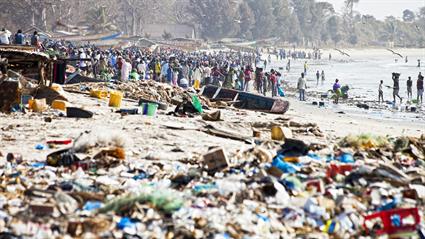 That holds true for almost every country, particularly because the clean-up costs are staggering, to say the least. California, Oregon, and Washington, for instance, spend an estimated USD 500 million annually to remove waste from the Pacific coastline. In a recent study, researchers noted that environmental damage done by the millions of tons of plastic floating around the world’s oceans amount to USD 13 billion a year. Many say, this estimate is fairly conservative and the actual cost is a lot higher. But countries can follow Africa’s lead to make a difference.

Solheim believes it all boils down to two things – sustained political will and good tie-ups with businesses. “Governments need to have a consultative approach with businesses to find the most efficient way to do things.”

Rwanda, once again, is a shining example in this regard. In the wake of the ban, the Rwandan authorities worked closely with companies to look for alternative materials and created a new market for environment-friendly bags. It was an effective way to make good the losses the plastic bag manufacturing companies suffered due to the ban and change Rwandans’ habit pattern of using plastic bags.

Countries in Africa are trying different ways to deter people from using plastic bags. While South Africa charges a tax on thick plastic bags (it has banned lightweight ones), Botswana has a levy on all types of plastic bags. Taking cue from African nations, many countries, world over, are beginning to do the same.

“The UK has recently introduced a small levy on plastic bags in supermarkets and this has drastically reduced their usage. They have also prohibited the use of micro-plastics which when discarded in the ocean is consumed by fish and finally enters our body when we eat fish,” says Solheim, who is also leading the CleanSeas campaign, which urges governments to pass plastic reduction policies, targets industries to minimize plastic packaging and redesign products, and urges people to change their own habits.

Ten countries have already joined the campaign with pledges to turn the plastic tide. Indonesia has committed to reduce its marine litter by 70 per cent by 2025, Uruguay will tax single-use plastic bags later this year and Costa Rica will take measures to dramatically reduce single-use plastic through better waste management and education.

“The campaign will gain momentum by learning from the best practices of a country. If one nation can do it, what’s the excuse for another nation to not do it?” he asks.

If the oceans could talk, they would agree it is a valid question.