History will be made when the icebreaking and hybrid TundRA 3600-H tug starts operations in Luleå, Sweden in early 2019. We give you a glimpse of the history-in-the-making.

This new tugboat will be the first vessel to operate with the new Wärtsilä HY propulsion solution, cutting the first surf, so to speak, for many other hybrid propulsion projects around the world.

The new tug is being added to an existing fleet of three other tugs in the Luleå harbour, an industrial port on the Gulf of Bothnia north of the Baltic Sea. Luleå is currently undergoing a massive port expansion to accommodate increasing exports of minerals from Sweden and Norway. This SEK 3.3 billion ‘Malmporten’ project includes dredging and new infrastructure.

Forward-looking and technology-savvy as ever, the Swedish Luleå port authorities were looking around for the latest in environmental solutions for tugboats and jumped at the Wärtsilä solution. The new tug is a prestigious order and will provide coastal towage, icebreaking, firefighting and emergency services to the port.

Wärtsilä HY propulsion means that a ship is capable of operating on electrical battery power when in transit. And during periods of higher engine load, a hybrid diesel-electric mode kicks in to accommodate fluctuating power demand. HY technology ensures a boost in thrust while keeping the engine in stable operating conditions. In addition to that, the Wärtsilä HY features a specific technology which ensures virtually smoke-free operations, also when starting the mechanical propulsion engines. 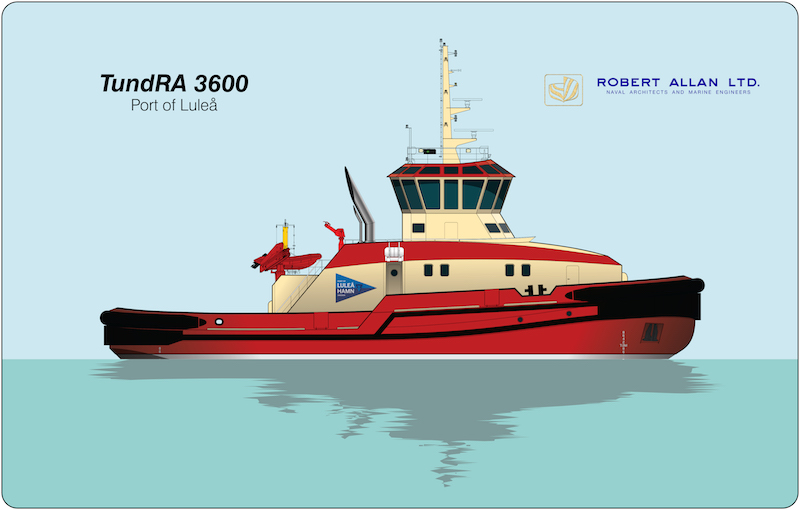 The new escort tug being built for the Swedish port of Luleå will be powered by two Wärtsilä HY 2 hybrid power modules.

“The integrated hybrid functionality of this vessel will give us a bollard pull of up to 100 tons, while saving fuel and maintenance costs and producing emission levels some 20 percent less than from a conventional ship of this type and size. In other words, we will have first-class performance in both its operation and its environmental impact. We are very pleased to be getting a tug that reflects the future needs of the industry,” said Henrik Vuorinen, Managing Director, Port of Luleå, to Tug Technology & Business magazine.

The TundRA 3600 Wärtsilä is being built at GONDAN Shipbuilders, in Asturias, Spain for delivery in early 2019 and is designed by Robert Allan, who has designed other icebreaking tugs for eastern Russia.

Wärtsilä will supply two Wärtsilä HY 2 hybrid power modules for the 36-metre tug, enabling it to be configured with a steerable thruster and azimuth propeller. It will be capable of operating on electrical battery power when in transit. The tug will have a bollard pull of up to 55 tons, or 90 tons on two main engines in diesel-mechanical mode, and will reach 100-ton bollard pull in a battery-assisted boost mode. Wärtsilä will also supply the power distribution train, the tug's integrated automation and its alarm system.

The vessel will be completely independent from additional charging facilities, since recharging of the energy storage system is automatically managed by the Energy Management System, the “brain” of the Wärtsilä HY. In addition, the installed onshore electrical connection will give the tug the flexibility to recharge the energy storage system, even when the tug is berthed at the quay. The Wärtsilä HY product’s operational flexibility will yield significant fuel, emissions, and maintenance cost savings.

A diamond in the ice

“The Wärtsilä HY is our diamond and represents the newest, strongest and most relevant technology we have developed,” says Giulio Tirelli, Director, Marine Engineering, Wärtsilä Marine Solutions, who, on behalf of Wärtsilä, holds a patent for part of the ‘smoke-free’ technology. “It is our bread and butter for the future.”

The TundRA 3600 has the added distinction of being the biggest icebreaking tug ever built, although its icebreaking capabilities (one-metre thick at up to 3 knots speed) are not its main selling point. “Hybrid (HY) technology is a propulsion system that is easily adapted to single, specific and local needs,” continues Tirelli. “What is unique is its near smoke-free operations whether it be on start-up or during heavy loads. This was very important for Luleå, and will be for many other ports as well.”

Says Göran Österdahl, General Manager Sales, Wärtsilä Marine Solutions: “This new vessel will represent the state-of-the-art for modern tugs and opens up a new era in shipping. Hybrid is not just about adding batteries to a ship. This highly advanced technology enhances the overall performance in terms of operations, economics, and environmental impact, where one plus one is more than two.”