When the Paris Climate Agreement was signed in April 2016, it was fully endorsed by fifteen nations. Thirteen of them were tropical island states. We analyse what pushes them to be proactive in this arena and how it will help them going forward.

When the Paris Climate Agreement was signed in April 2016, it was fully endorsed by fifteen nations. Thirteen of them were tropical island states. We analyse what pushes them to be proactive in this arena and how it will help them going forward.

Island states are playing a big role in climate change. The endorsement of the Paris Climate Agreement by 13 of them demonstrates the increasing awareness of the expected environmental benefit and qualifies the island states’ accelerated drive towards renewable energy in mitigation of the risk.

However, the drive towards renewable energy isn’t exclusively environmental.

There is economic advantage as well. The costs of VRE (Variable Renewable Energy), like wind power and solar, have seen dramatic reductions in the past decade, especially since the raw material fuels - sun and wind - tend to be freely available. This gives them an economic and environmental advantage over expensive imports of fossil fuels to island locations.

Low-cost VRE sources are attractive to many of these smaller, developing nations, as they are not constrained by baseload plants. If these VRE sources are balanced with fast-dispatch peaking-load plants, like small hydro, and if they integrate with existing diesel engines, then the migration towards total renewable sources makes more sustainable and economic sense.

The high cost of fuel imports, for both energy generation and transport, also may make renewable energy innovation more viable in areas where the impact is greatest. It is probably of some consequence that, despite the volume and emphasis on development in European waters of ocean energy sources (like tidal and wave), the major upcoming developments are in Asian island states. Most notable are the planned 150 MW tidal array off the coast of Indonesia, using 1.5 MW turbines trialled in the Orkney Islands, and a wave power array in coastal Sri Lanka. The latter will be driven by AW Energy’s WaveRoller® technology following the recent agreement with Wärtsilä Energy Solutions and the subject of a common commitment between Prime Ministers Ranil Wickremesinghe of Sri Lanka and Juha Sipilä of Finland in early 2017.

The deciding factor in partnering with Wärtsilä extends to its comprehensive global Services network, which complements the needs of this innovative sub-sector through its marine focus and locations.

Large hydropower plants, though cost-effective, long-lived and efficient, attract a level of environmental concerns around displacement, impact and the release of greenhouse gases (methane) from larger dams. Bridget Deemer from School of Environment, Washington University, Vancouver, estimates that dams emit around 25% more methane by unit of surface than previously estimated.

An area of focus that addresses many of these issues and complements VRE generation is PHES (Pumped Hydro Energy Storage) which, in many instances, can use existing landscape or derelict sites (like quarries or mines) to deliver effective balancing energy storage.

Dave Holmes, MD of Quarry Battery Company the developer of the 100 MW Glyn Rhonwy Pumped Storage facility in Snowdonia, Wales describes this as recycling the land rather than using some new land for the site.

Many of the older PHES facilities have had their performance upgraded using American Hydro, a Wärtsilä company, or could see reduction in downtime with Wärtsilä REvolution Shaft Seal systems.

Alan Roth, President of American Hydro, states that pumped storage remains as the only proven source of utility-scale energy storage. “Our technology results in optimising older pump generating assets to meet the demands of integrating variable energy sources”, he continues. According to the US Department of Energy (Global Energy Storage Database), pumped storage hydro currently accounts for greater than 96% of the world’s utility-scale energy storage capacity.

El Hierro, one of the smaller Canary Islands, provides a prime example, with a combined (hybrid) wind and PHES facility. The Gorona del Viento plant has a wind park of 11.5 MW capacity and a hydro energy storage capacity of 11.3 MW. Both are targeted towards 100% renewable energy generation for the island and to develop it as a model for other island states.

Battery technology will accelerate and become more commercially viable; most likely driven to match the cost trend curves of solar PV and wind sectors over a relatively short period of time. Matching the technology to demand type will also increase acceptance. Collaborative innovation can also make a difference. Case in point in a deregulated energy market scenario is the recent announcement of 4 MW of added battery sorage to the Buck and Byllesby Hydropower plants in West Virginia. The project is being delivered by Greensmith Energy, a Wärtsilä company.

Iceland is another example. It also features prominently on the world stage as the largest (per capita) producer of green energy, mainly geothermal and hydro. It could soon be in the enviable position of selling and exporting excess renewable generation into Europe.

Despite the ‘competitive’ nature of renewables media reporting, whether it be percentage drops in cost or the capacity and size of new installations (onshore or offshore), the overall solution is provided by a balanced approach and, in many cases, a hybrid. Neither wind nor solar are singular solutions; the answer is normally provided by a balanced suite of generation allied to the demand flexibility, geography and available resources. More often now, a balanced portfolio will need to be complemented with some form of energy storage. 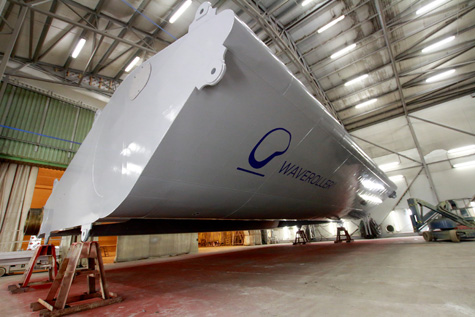 WaveRoller is a unique solution which uses a giant submerged panel which moves with the waves to generate energy.

Towards sustainable societies – what’s next for renewables?

Innovators, like Wärtsilä’s partner Natel Energy Inc., are creating aligned solutions that address the challenges globally. Their home market, United States, is populated with 80,000 dams without power generation, 40,000 of which are less than 25 feet in height, which could incorporate commercially viable low-head renewable hydropower.

Their patented HydroEngine® enables ultra-low environmental impact development of those sites. The consequence is a significant commercial advantage through reduction in civil engineering. Apply the technology in sequence in low head/high flow environments and you have a compelling alternative – a low cost distributed energy storage capability.

Gia Schneider, CEO of Natel Energy said in an address to the US House of Representatives Committee on Natural Resources, Subcommittee on Water and Power, “our mission is to maximise the use of existing water infrastructure in the U.S. to bring cost-effective, distributed, baseload, renewable energy from low-head hydropower sources with minimal negative environmental impacts. Indeed, in certain cases, we believe the potential exists to implement projects that both deliver renewable energy and create positive environmental co-benefits.”

Natel is developing a Restoration Hydro concept that addresses habitat and water table restoration and restitution, whilst incorporating ultra-low impact hydropower generation. In consequence, the environmental and economic benefits are combined. Power generation sales support, longer-term project funding for the positive impact and management of the river course go hand-in-hand.