Can oceans provide our energy?

Humanity has always been in awe of the power of the oceans. But it is now time to harvest the energy of the oceans. Is it doable? We answer that question, and many more, in this story.

Oceans create a vast amount of energy thanks to waves, tides, currents and even differences in salinity and heat levels. Much of the world’s population lives close to coasts, allowing for shorter energy transmission. Marine energy is also renewable and can be used with a low environmental impact. So why isn’t marine energy as big as solar or wind?

“The problem is not technology,” says Krish Sankaran, founding director of Vaasa Energy Business Innovation Centre (VEBIC). “The two main issues are successfully harvesting that energy and distributing it with minimal loss. If you look at coal versus tidal energy, marine power is still expensive.”

Sankaran leads three main research areas at VEBIC: internal combustion engines (where Wärtsilä is the key partner), smart grid and the Radical Innovations Group (RIG). Within RIG, Sankaran explores technologies in energy storage, harvesting and conversion. It is the continuation of his earlier work at Prajñālaya (meaning Temple of Energy in Sanskrit). Sankaran only indirectly works with the sea as a source of energy, but he believes in the huge potential of the ocean.

Living on ‘Ocean’, not ‘Earth’

There are various methods to harvest the energy of the oceans. One of the most common is wave power, which can be captured with buoys, attenuators or oscillating water columns. Turbines capture movement and generate electricity. A similar idea is to capture high tide behind a dam and release it to generate power just like a hydroelectric dam on a lake.

Other ideas include pumped storage. Some hydroelectric stations pump water to a higher reservoir when demand is minimal and release it to generate energy when demand is high. The same concept is being used in Canada, where a utility pumps air into huge inflatable underwater bags. During peak periods the water pressure is allowed to force out the air and drive turbines.

“If you look at the globe, you wonder why our planet is called ‘Earth’ and not ‘Ocean’, because there is so much more water than land. The ocean will definitely be a good source of energy in the future,” Sankaran says. “We just need to be careful so we don’t damage the marine ecosystem, and we have to employ circular economy principles with the entire supply chain.” 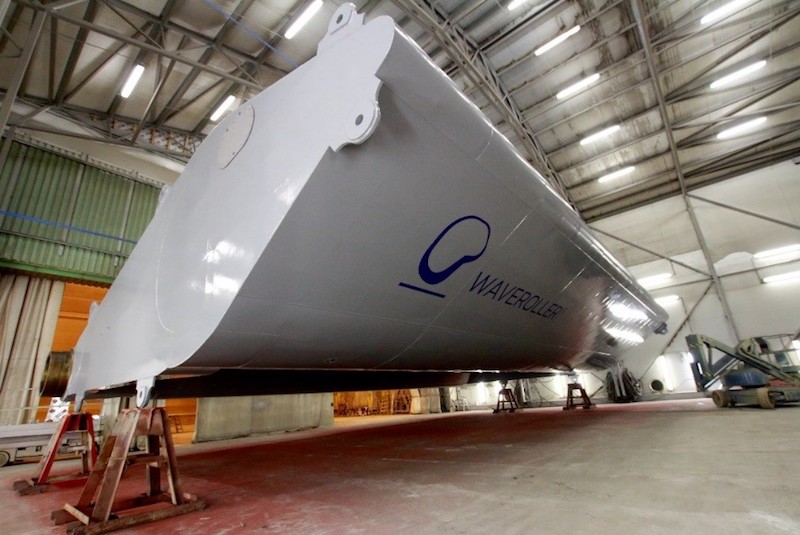 WaveRoller is a unique solution which uses a giant submerged panel which moves with the waves to generate energy.

A few marine energy ideas have graduated from the drawing board and are ready to be commercially applied. One of those is the WaveRoller from AW-Energy, a Wärtsilä partner. WaveRoller is a unique solution which uses a giant submerged panel which moves with the waves to generate energy.

“WaveRoller is currently in the commercial roll-out phase and has an ongoing commercial project in Peniche, Portugal,” says Christopher Ridgewell, CTO of AW-Energy.

There are many different ways to harvest wave energy, such as the Pelamis undulating snake or Wello’s rolling hull design, but AW-Energy explains the benefits of their solution.

“The WaveRoller is actually able to store and level energy in a way that guarantees a steady input to the grid – an issue most renewable solutions struggle with,” Ridgewell continues. “This way the grid doesn’t have to take on energy fluctuations beyond its capabilities and any perturbations are avoided.”

The final piece of the puzzle?

Although its main purpose is to generate electricity, there are other potential benefits. The base acts as an artificial reef and hosts marine life, and with a few modifications the WaveRoller can produce fresh water out of seawater through reverse osmosis.

AW-Energy is optimistic for their future. The World Energy Council believes that the total global potential of wave energy is about 32 PWh/yr, approximately double the world’s electricity supply in 2008.

Efforts such as these will add up in the long run and help explore the potential of the ocean. The tide is turning.