Where accessible energy is in short supply, it is tough to meet the challenges of day-to-day living, let alone run a small business. But a Wärtsilä-sponsored project running in rural Kenya and Tanzania, GoSol.org, is providing a clean, off-the-grid solution to help local entrepreneurs – and communities – thrive.

Where accessible energy is in short supply, it is tough to meet the challenges of day-to-day living, let alone run a small business. But a Wärtsilä-sponsored project running in rural Kenya and Tanzania, GoSol.org, is providing a clean, off-the-grid solution to help local entrepreneurs – and communities – thrive.

David Chepkwone slides a tray of freshly-baked loaves out of the oven, admiring its golden-brown perfection. “Mainly we are producing breads, muffin cakes and snacks,” he says.

Chepkwone is the head baker at the Koptige Bakery, a community-owned business in the town of Tinderet in rural western Kenya. Sales are booming, he says. Demand is high. In spring 2016, the business switched from primarily using its old electric oven, which is connected to an unreliable and costly power supply, in favor of a SOL5, the first of two next-generation solar-powered ovens the bakery received under the auspices of GoSol.org.

Koptige was one of the initial pilots in the project, which used advanced solar tech to incubate and support businesses in parts of Kenya and Tanzania where electricity supply is typically cost-prohibitive, spotty, or more often, non-existent. In the case of the bakery, the weak power connection meant expanding the business was impossible, since frequent power cuts put batches in jeopardy.

Though the bakery still uses its electric oven, the solar oven has boosted production and lowered costs, allowing Koptige to reach more customers. After one year of successful use, GoSol.org installed the second solar oven to increase production further still.

In an interview posted on GoSol.org's YouTube channel, Chepkwone shifts from baker to businessman mode, rattling off the increased profit figures and explaining how the newfound money is being reinvested into fertiliser and financial support for the community's school children.

“As soon as [David] saw he could bake for free, he totally got it. He really understood all of the implications of the tech, for themselves as well as for the region,” says Eerik Wissenz, chairman and co-founder of Solar Fire Concentration, the Finnish-based company behind GoSol and the developer of the technology that powers it. 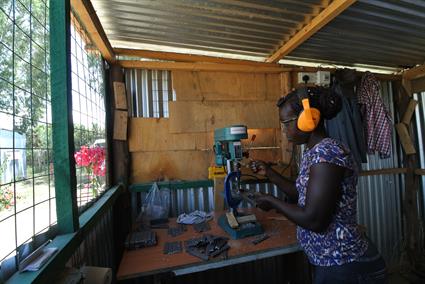 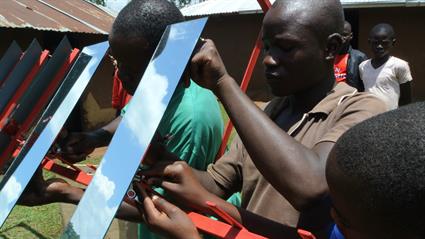 Construction work in the Misire community

That technology is the SOL5 ovens and roasters, which employ a 5m2 array of mirrors to concentrate sunlight. They're powerful enough to bake 30, 200g loaves in 45 minutes or roast 20 kg peanuts in 3.5 hours.

Partnering with World Vision in Kenya and Global Resource Alliance in Tanzania, GoSol.org has initiated ten pilots thus far, providing the SOL5 to rural collectives engaged in businesses such as baking, peanut roasting and fish dehydrating – businesses that depend on heat.

“Making heat with electricity is not a good use of electricity where electricity is scarce,” Wissenz explains. That scarcity is certainly evident in western Kenya, where electrification rates were estimated at 22% for rural businesses and 5% for rural households in a recent study by the University of California, Berkeley. Where electricity isn't available, the situation can be worse. Wood and charcoal fill the gap, creating problems ranging from deforestation and pollution to unhealthy smoke exposure, to women spending hours, each day, collecting firewood.

The switch to solar thermal obviously alleviates these problems, but also gives the businesses a space to grow. “It generates income, which promotes development. Everybody wins when poverty is alleviated,” Wissenz says.

It was this development-through-entrepreneurship aspect of GoSol.org that attracted Wärtsilä to the project, according to Jukka-Pekka Niemi, General Manager for Marketing at Wärtsilä Energy Solutions.

“We were looking for a project where we could help [East African] societies, in addition to building grid-strengthening power plants,” he said. “GoSol is helping micro-entrepreneurs. We found that very fitting with Wärtsilä's vision because when you help entrepreneurs, you make businesses grow and then societies evolve as well.” 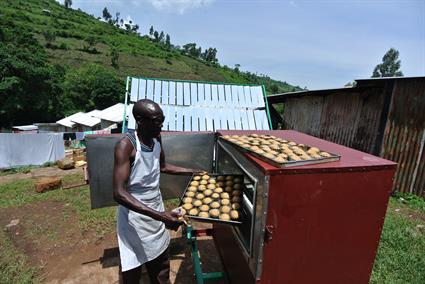 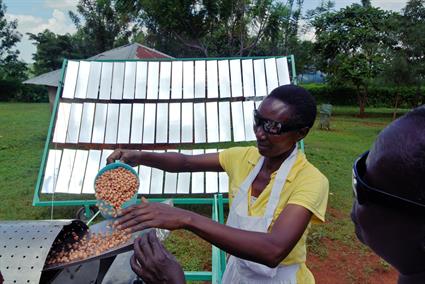 Pouring the peanuts into the solar roaster

GoSol.org's piloting phase is nearly complete. The next step, says Wissenz, is to get a SOL5 to ‘whoever needs one’. The idea is to incubate many more businesses through a combination of microfinance loans and training. The fact that the SOL5 is made from simple materials – just mirrors and steel – means it can be built and maintained by local artisans, which keeps the cost down.

Wissenz says that, ideally, the SOL5 will also make its way into schools, where it can be used both to cook food for children and as a basis for lessons in physics at various grade levels. Solar Fire Concentration is already working on the relevant educational materials.

Back in Tinderet, Chepkwone says word has spread and interest in getting the tech has been high. “The [SOL5] has helped us a lot as a group, for getting employment, getting income, and assisting other people. We still need more of these in several places in Kenya.” 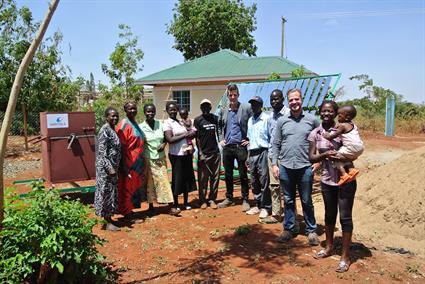