Gas Fest in Amsterdam, this November, provided a platform for a host of ideas. Creating a ‘fair trade label’ for green transportation, finding a spokesperson for LNG, and continuing to search for new solutions on an online forum were a few of the many interesting ones. Here’s a report.

Gas Fest in Amsterdam, this November, provided a platform for a host of ideas. Creating a ‘fair trade label’ for green transportation, finding a spokesperson for LNG, and continuing to search for new solutions on an online forum were a few of the many interesting ones. Here’s a report.

Over a hundred high-level leaders and influencers from the global onshore and offshore gas community attended the two-day event, Gas Fest, to share knowledge and develop strategies for a better future. The unique 'for industry, by industry’ platform, with the theme ‘Providing cleaner energy for the many’, featured an inspirational and informal, festival-style programme.

The event, co-hosted this time by Anthony Veder, Bureau Veritas, ENGIE, GASUM, GIIGNL SEA\LNG, SGMF, Shell, Wärtsilä and Winterthur Gas & Diesel, was appropriately held in the Westergasfabriek. The former gasworks factory, built in 1885, is now a cultural venue. The gas used to be extracted here from coal and used for street lighting in Amsterdam.

The venue was splendid. Small lamps hung from the one side of the great hall to the other and colourful images were projected on the whitewashed brick walls. Food and drinks were available from the bar in the centre of the hall or from one of the small food trucks outside. In between the workshops, discussions, and plenary sessions, the attendants sat at wooden tables and comfortable couches set amongst cosy foliage and built new connections with peers from the industry.

Throughout the day, scribe artists created colourful and powerful visuals on the white boards, skilfully summarising the discussions. Gabrielle Walker was the moderator of the event.

Roadmap for the future

“We hope this will be the beginning of a roadmap for the future,” said moderator Gabrielle Walker at the opening. “Everyone should have access to energy, and at the same time we need to reduce our carbon footprint.”

Right now, 1.2 billion people have little or no access to electricity and worldwide more people die from pollution than from war, violence, smoking, hunger, natural disasters, AIDS and other diseases combined.

“The future is not far away. It is today,” said Stijn van Els, Chairman at Shell Germany welcoming the attendees. He described how far Europe has come since the coal-filled years of his youth, in large part, thanks to natural gas. LNG is the cleanest available marine fuel and therefore provides a replacement for more polluting fossil fuels such as coal and oil.

A panel of experts then shared their views with the audience. Didier Sire, Senior Advisor to the Secretary General at the World Energy Council, reminded participants that the demand for electricity will double by 2060. Johanna Lamminen, CEO at Gasum Ltd responded: “We need all solutions available to bring emissions down. Gas can play a crucial role in this.”

“Many people don’t see gas as an alternative yet,” remarked Rudolf Huber, Chairman at LNG Austria, known as the ‘Pitbull of LNG’. “They think gas is something evil that will kill them. There is so much misinformation.” The panellists agreed that the industry needs to communicate better and work to develop new technologies to make gas cheaper and more sustainable. 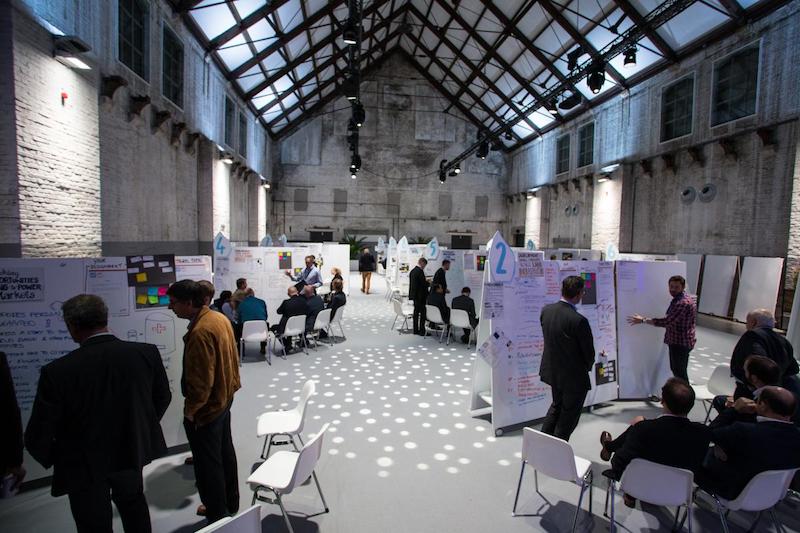 Participants were split into thirteen teams, each tasked with a pre-identified topic in the field of LNG.

Participants then split into thirteen teams, each tasked with tackling a pre-identified topic in the field of LNG and making a list of issues that need to be addressed urgently.

Participants then had the option to join one of the four different Knowledge Labs to learn more from a variety of experts. Discussions continued during the evening programme that included drinks and dinner, aerial acrobats, comedy and beatbox.

At the start of the second day, New York Times bestselling author David Bodanis gave an Ignite Talk, offering participants a peek into Einstein’s world, a hundred years ago in Switzerland.

“Like today, the energy and transportation system was changing. There were still horse carts, but electric and steam power were getting big.” He advised the audience not to look back like Einstein did, whose biggest successes came early in life.

The participants continued working in small groups during the day until it was time to return to the plenary. White chairs stood in three circles for the Gasometer, a plenary session where representatives from all groups shared their ideas.

In almost every conversation, moderator Gabrielle Walker noticed attendees discussing the need to engage not only with politicians and regulators but also the public. The only way to change the perception is to tell the story of LNG as a greener fuel alternative, using simple language and captivating storytelling, she summarised. We need a spokesperson, the participants agreed. ‘Find the Elon Musk of LNG’, one group had written on a whiteboard, ‘Hire Barack Obama as LNG Ambassador!’ on another.

According to the attendees, the gas industry also needs to speak to stakeholders, such as the European Union, WWF and Greenpeace. A participant also suggested inviting renewable energy stakeholders to the next Gas Fest. Another idea was to create a ‘fair trade label’ for green transportation. “Consumers should be aware of how a product reaches their homes,” said Martijn Nieuwenhuijs, Marine and Offshore Chief Executive Netherlands at Bureau Veritas. “So when they for example buy a phone, they can choose one transported in an environmentally friendly ship. Now they are only offered the most cost-effective method.”

The rules need to be harmonised as well, the attendees agreed, and cost reduction of LNG infrastructure is crucial too. “It’s great to go green, but if it’s not competitive, forget it,” said Lauran Wetemans, General Manager Downstream LNG at Shell.

Setting up technology groups was suggested to tackle the lack of infrastructure. Dirk Wuyts, Sales Director at Gefo Gas, said that LNG is not an option yet for their ships that travel long distances on the Rhine, because there aren’t enough bunkering installations. “Customers want us to respect the environmental norms and LNG is a good alternative to diesel, but building installations is a big investment.” The participants expressed their satisfaction with the event’s organisation and results. “I have been to many conferences, but this one was different,” said Rolf Stiefel, Vice President Sales and Marketing at Winterthur Gas & Diesel Ltd. “It was much more workshop-based and very useful to hear different opinions.” He would like Gas Fest to become a yearly event, “to see how we’ve been developing.”

“It was great to be able to meet with other CEOs,” said Julien Bec, Vice President at GTT, explaining that the decision makers are not usually present at events like this. The discussions in small groups widened his views. “Normally at conferences like this, you see people looking at their phones all the time. Not here.”

Alexander Panagopulos, Chairman and CEO at Arista Shipping proposed that the organisers create an online platform, where the industry leaders can continue the conversation and take further steps. Jan Tellkamp, Business Development Manager, Downstream LNG at DNV GL summarised many of the participant’s hopes: “I’d like to see this event create true momentum to overcome barriers.”