During the summer of 2016, Wärtsilä Flow and Gas installed a 1 MW Pilot GasReformer in Bermeo, Spain to demonstrate the GasReformer’s ability to reform LPG type of heavy gases such as liquefied volatile organic compounds (LVOC) into methane. The test unit is proving a hit with offshore customers interested in saving money.

During the summer of 2016, Wärtsilä Flow and Gas installed a 1 MW Pilot GasReformer in Bermeo, Spain to demonstrate the GasReformer’s ability to reform LPG type of heavy gases such as liquefied volatile organic compounds (LVOC) into methane. The test unit is proving a hit with offshore customers interested in saving money.

Gas reforming has long interested the offshore sector. Oil produced from offshore fields always contains associated gas, mainly consisting of natural gas (methane) and heavier gaseous hydrocarbons, such as ethane, propane or butane, with traces of even heavier hydrocarbons. While considered as fuel gas, heavier hydrocarbons have low fuel quality, indicated by a low methane number – the measure of a gas’ ability to withstand compression in the engine before ignition.

If a gas’ methane number is too low, it will self-ignite outside the envelope of the normal combustion front. This causes the engine to knock, thereby requiring derating – reduced power output and decreased engine performance ­– to function properly.

So, with such varied composition, this gas normally cannot be used for power generation. Instead, it is usually regarded as waste.

Most often, this gas is simply flared or, in the worst case, vented. Hydrocarbons are a far more harmful greenhouse gas than carbon dioxide, due to their higher global warming potential.

Not to mention that it is also a waste of resources. Cleaning up this gas so it could be used would be a big plus. Although Wärtsilä knew that its offshore clients would be very interested in a solution that would allow them to use that waste gas, the company needed to prove it could be done. 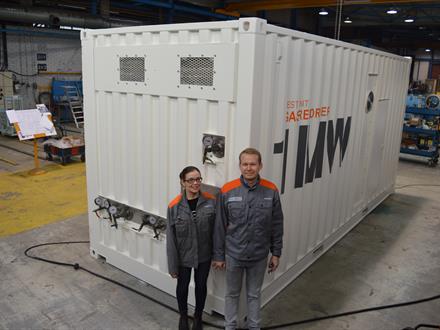 Reetta Kaila, Product Manager of the Bermeo GasReformer pilot unit, located in the test facility in Spain, confirms that customers really needed to see to believe it.

Kaila notes, “Customers in the offshore industry are sometimes a little conservative so they want to see a technology or process work. In this case, they asked to see a gas reformer in operation. Well, this new test unit will give us a previously missing proof of technology and a reference tool, with which we can more easily convince the customer.”

As the gas reformer makes it possible to use gaseous fuels that either contain large amounts of heavier hydrocarbons or vary in their composition, gases that were previously considered to be waste can now be converted into valuable sources of energy. The prospect of being able to see the gas reformer in action is a great motivator for customers.

Kaila is taking a systematic approach to marketing the new technology. “We will discuss the gas reformer at our upcoming customer meetings. When we have more traction, we will arrange open days, where customers will be invited to see the gas reformer in operation.”

“By reducing greenhouse gas (GHG) emissions from the oil and gas value chain, by recovering vented and wasted hydrocarbons and utilising them for power generation, the operator or owner will get remarkable savings – for example in fuelling costs, bunkering and transportation – of around 50%. And, obviously, the environment benefits, too.”

And there may be even more benefits to the gas reformer.

Kaila explains, “If the side streams, such as natural gas liquids from LNG production or boil-off gases, can be used for power generation, there will be less need for handling equipment for side streams such as reliquefaction, storage or shipping. The investment into new, green technology will usually have a payback time of one to three years.” 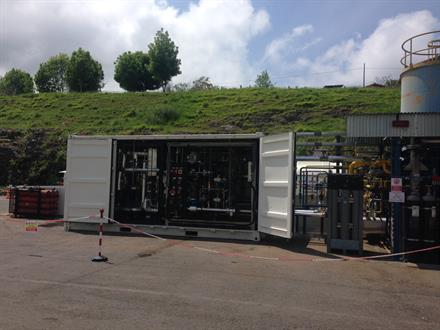 The gas reformer’s technology is based on steam reforming (SR), a catalytic process familiar to the petrochemical industry and refineries, where traditionally hydrogen is produced from various hydrocarbon feeds. The Wärtsilä Gas Reformer exploits the same catalytic process but operates under different conditions. In the Wärtsilä Gas Reformer, the methane number (MN) of any fuel gas is improved to 100 ± 5 by converting the heavier hydrocarbons to synthesis gas (H2 + CO) and finally to methane (CH4).

Kaila explains the process in more detail. “We take the feed gas stream and ‘polish’ it. We make sure that there is no sulphur in it, and then we add steam into the stream before feeding it into a catalytic reactor. On the catalyst surface, all the heavier hydrocarbons are split into smaller components, mainly methane and other components with only one carbon atom. So, we just cut the carbon chain into small pieces and then build it up again to form only methane, with a little hydrogen and carbon dioxide produced, too. We cool the produced gas down and separate all excess steam in the system, which can then be fed straight to the engine.”

The GasReformer is a perfect product for the offshore market because they understand the actual process of oil and gas processing, notes Kaila.

“I think many marine customers see the whole gas reforming idea as a little magical or mystical. They’re really not sure how it works so they’re a little wary of it. But the offshore industry gets it. They have a good understanding of oil and refinery processes, and they are familiar with the technology. So it is perfect for them.”