Full speed ahead for onshore green ammonia production in Norway

Nobody in the maritime industry doubts the need for new solutions to reduce carbon emissions, but carbon-free shipping is still regarded by most as some way off. Thanks to the ZEEDS initiative however, greener shipping is already becoming a reality in Norway. As part of one of its four workstreams, the initiative – which has brought together a diverse group of partners dedicated to create the infrastructure for producing green ammonia and distributing it at sea – is currently building an onshore green ammonia supply chain.

Members of the ZEEDS initiative decided early on that there can be no chicken-and-egg situation when it comes to developing the green ammonia ecosystem: Nobody will produce engines for which there is no fuel, and nobody will produce fuel if there are no engines to burn it. Rather, everything needs to happen simultaneously. “Things need to work in parallel to make greener shipping a reality. There is no sense in converting vessels to run on ammonia before there is a supply chain for producing it in a green manner,” explains Terje Skansen, CEO of Varanger Kraft. To this end, the ZEEDS initiative is split into four workstreams, one of which is focused on building the onshore supply chain for green ammonia.

Laying the foundations for a carbon-free future

Varanger Kraft is one of several partners working to develop the world’s first commercially viable green ammonia ecosystem. The process uses wind power to produce hydrogen through electrolysis, and this is then turned into green ammonia, which produces no carbon emissions.

“The process uses wind power to produce hydrogen through electrolysis, and this is then turned into green ammonia, which produces no carbon emissions.

The production of green ammonia will take place in the municipality of Berlevåg in the far north of Norway, where Varanger Kraft already operates a 50 MWh windfarm; the capacity will need to be increased to 100 MWh to facilitate green ammonia production. “The concept phase is almost complete, and in the second half of 2021 we will start the design phase, where we get down to the literal nuts and bolts of the future plant,” explains Skansen. Once the design is approved, the partners will seek the backing of the Norwegian government, and the signs are positive.

“We’re encouraging every step that industry can take to make Norway even greener,” explains Liv Kari Eskeland, Member of Parliament in Norway from the Conservative party, and a member of the Standing Committee on Energy and the Environment. “Norway has always been at the forefront when it comes to shipping, and we want to be there with green vessels as well. We applaud the efforts that the ZEEDS initiative is making and want to be there to help through grants, investment tools, rules and regulations, and to provide support for testing, pilot phases and scaling up.”

ZEEDS brings together a wide range of partners to create the infrastructure needed for green shipping. This project is the first partnership in the Nordics to include members specialised in all elements of the value chain needed to produce and distribute green ammonia. The partners include leading Norwegian maritime players like Aker Solutions, Kværner, Grieg and Wärtsilä and energy producers and distributors like Statskraft, Yara and Varanger Kraft, and Statnett, an associated partner.

“For me, it’s important to provide the tools so that the project can be a success – we’re an enabler and supporter. What ZEEDS has demonstrated so far is that, when you bring together different stakeholders that don’t normally work together, they have to think outside of the box and create new ideas. This kind of innovation is exciting and enables the goals to be reached much faster, and can also develop new business models,” says Eskeland.

Skansen agrees: “It's very inspiring to work together. We’re a small company working with big players like Wärtsilä and Grieg, and all of us have a key role to play in the process. The support of the government is also key to the success of this project.”

In addition to demonstrating that onshore green ammonia production is feasible, this initiative will also create between 30 and 70 new jobs in Berlevåg, an area with a population of about 950 people. “Beyond the plant itself, there is huge potential for the creation of other jobs in the area through supply chains, spin-off companies and tech clusters,” highlights Eskeland.

Circular economy thinking is part of the plan, which means the side streams of the green ammonia production process will be reused. For example, producing hydrogen through electrolysis creates a lot of oxygen, something that Norway’s second biggest industry, fisheries, needs a lot of. A local onshore salmon farm will receive the oxygen, as well as excess heat, from the green ammonia factory.

And while the main goal of the project is to show that green ammonia is a promising carbon-free fuel for shipping, it also has the potential to provide green energy to remote power systems. Green ammonia from the Berlevåg plant will be supplied to a power plant in Longyearbyen – on the remote Norwegian island of Svalbard – to replace coal, further reducing emissions in the delicate arctic ecosystem. 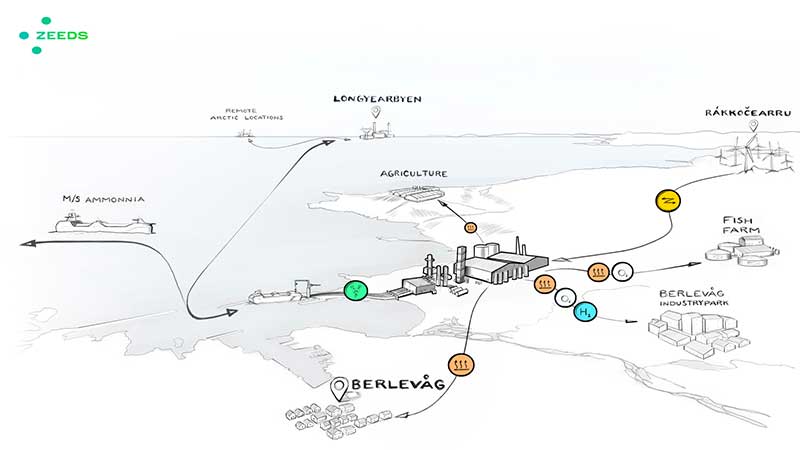 Take a tour of the Berlevåg windfarm .

A model for future development

The goal of the project is to create a working green ammonia infrastructure that can serve as a model for future projects in other areas. “Looking ahead, we plan that the plant will expand production from 100,000 to 200,000 tonnes of green ammonia, but this is only a small fraction of what the world needs to make green shipping a reality. That’s why one of our goals is to build a standard plant design that can be transferred anywhere to expand production around the world,” says Skansen.

Currently, producing green ammonia through electrolysis is expensive, admits Skansen: “Initially green ammonia will cost around €600 per tonne, compared to around €300 per tonne for grey ammonia, so we need the public to share the bill in the beginning. But by 2030 this price difference should have narrowed a lot.”

The Norwegian government also sees the potential here. “This project serves as inspiration for a new ecosystem; many other businesses and countries can learn from this. It's a disruptive way of thinking, and we will need many more of these kind of projects in the future to cut emissions,” says Eskeland.

Learn more about ZEEDS and collaboration regarding the Smart Marine Ecosystem.