From trainee to trainer – Theo Vennings’ 40 years of outstanding service

Theo Vennings progressed from trainee to become one of the foremost experts on metallurgical repairs for propellers at Wärtsilä’s Land & Sea Academy.

For some, a 40-year anniversary could feel like a drag, but for Wärtsilä and Theo Vennings it’s a chance to reflect on an exemplary career with its roots firmly anchored in the shipyards of the Netherlands. Now an instructor in the Wärtsilä Land & Sea Academy in Drunen, Theo’s thirst for knowledge and hands-on approach continue to serve him – and Wärtsilä – very well.

Four decades ago Theo Vennings’ career took a change in direction when the newly married car mechanic followed his father-in-law into the maritime services industry. Theo swapped working on car engines to begin life as an apprentice grinder and welder, repairing and refurbishing ship propellers at the LIPS B.V. workshop in Drunen in the south of the Netherlands. Today the site is home to the Wärtsilä Land & Sea Academy (WLSA) Netherlands.

“I started work as a car mechanic in 1973, but as I was looking to buy a house and start a family I needed to take home a little more money, which is how I found my way to the LIPS factory and life as a grinder and welder,” Theo explains.

“So much has changed since – back then the propellers we were working on were much smaller, perhaps six or seven metres across and weighing 40 tonnes, whereas today they can be 10 metres across and weigh 100 tonnes. They were also made from alloys with far less strength, so there was plenty of repair work to be found and some very long shifts welding, straightening and repatching them,” he recalls.

LIPS was a hive of activity, with a team of 16 people working in two shifts helping the company to build a reputation as the world’s number one centre of excellence for maritime propeller repair. In 2002 the business was acquired by Wärtsilä. 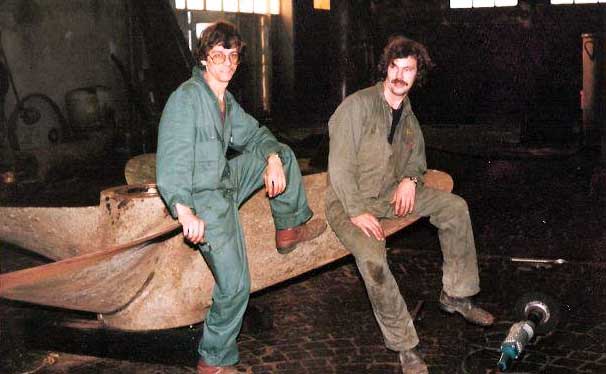 Theo Vennings (to the left) in the early days of his career.

Moving with the times

The late 1980s and early 1990s saw copper nickel aluminium (CuNiAl) become the dominant material in propeller manufacture because of its high resistance to corrosion and cavitation, especially when exposed to seawater. In addition, more and more vessels were being fitted with controllable pitch propellers (CPPs) instead of fixed-pitch propellers (FPPs).

“Initially we specialised in adjusting the pitch of FPPs, which we did in the workshop on a special frame, twisting the complete blade while measuring the pitch,” explains Theo. “While this was a costly process for the vessel owner the payback time was just a few months because of the speed gain and reduction in fuel consumption. Later on, thanks to new digital tools we were able to accomplish the same process in dry dock, afloat or in a workshop anywhere in the world, which made things much easier and cheaper for the customer.”

“The order book at LIPS became much more predictable with fewer ups and downs since changing and repairing or refurbishing CPP blades was far easier. New materials meant new welding techniques too. Whereas before we were using gas and arc welding, the switch to CuNiAl meant more MIG (metal inert gas) welding, which is much faster and much easier to do,” explains Theo.“

Theo’s huge thirst for knowledge and desire to improve himself led to a promotion to shift leader in 1990 and to workshop chief in 2002. Part of his responsibility was overseeing the certifications that the welders needed to go through every year, which is where his interest in training began. “Scuba diving is another big passion of mine, and I take part in training, maintenance and annual certifications for my local diving club too, so I’ve always had a keen interest in learning more and passing on my knowledge to others,” he explains.

From trainee to trainer

Theo’s colleague at WLSA Netherlands, Training Centre Manager Ruud Van Hamont, picks up the story: “Drunen is one of our global centres of excellence for propeller technology and service, so we’re very lucky to have Theo here. Whereas once it was Theo asking questions from metallurgists to build his own knowledge, today he is often the go-to guy for them if they want to ask about materials and welding techniques or qualities,” Ruud says.

“Whereas once it was Theo asking questions from metallurgists to build his own knowledge, today he is often the go-to guy for them if they want to ask about materials and welding techniques or qualities.

“Because Theo is a really hands-on guy who has learned much of what he knows by doing, he brings invaluable knowledge in both the theory and the practical application of what we teach at WLSA Netherlands,” continues Ruud.

It was Theo himself who, in 2008, decided to change tack in his career again and pass his vast knowledge and experience on to the next generation of service professionals. “We had a global network of locations with various welding equipment, grinding machines, tools and measurement equipment, and I just thought ‘Who is going to teach everyone about all this stuff?’ It turns out that the answer was me!”

WLSA Netherlands at Drunen is a modern 1200 m2 facility built on the site of the Wärtsilä factory, which closed its doors in 2010. “WLSA Netherlands started out focusing mainly on propulsion, seals and bearings, but over the years has expanded its focus as a technology training centre to cover other areas such as scrubbers and ballast water treatment systems as well as Wärtsilä 4-stroke and 2-stroke engines,” says Ruud.

This wide portfolio means it is vitally important that Wärtsilä can map and track the individual training needs of its field service personnel to ensure that everyone has right skills and a clear development path. Experienced trainers like Theo play a vital role in developing Wärtsilä’s knowledge base in this regard.

An insatiable thirst for knowledge

Theo’s appetite for learning shows no signs of waning, and he remains a hugely valuable part of the Wärtsilä WLSA team. “There are always new materials, new seals and new tools to learn about, and digitalisation has set the bar high in terms of what we can achieve and what our customers expect,” Theo points out.

As vessels and their systems have become more complex and interconnected, people as knowledgeable and experienced as Theo are a prized asset for a global leader like Wärtsilä. “A vessel that can’t sail can’t make money, so the faster we can get it back up and running the better, and this means having the right people with the right competences available at the right time – to get things right first time,” Ruud highlights.

“The COVID pandemic has caused an understandable lull in the demand for face-to-face training, so Theo took it upon himself to get back to the workshop floor to keep his hand in with the latest technologies and techniques. This is why, with Theo on our side, we’re always a step ahead of the game.”